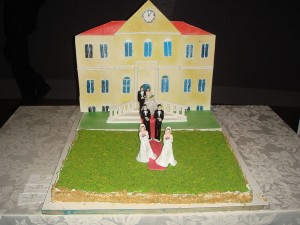 If you’re wondering why we’re suddenly hearing so many stories about conservative Christians (not Muslims, mind you, just Christians) being dragged before the thought-police for failing to bake cakes, make bouquets, or take photographs at gay weddings, you need wonder no more.

Coincidence is not at work here.  These small business people are being targeted. While the true civil rights movement of the 1950s and 1960s targeted the government that denied them their constitutional rights, as well as big businesses that cooperated with the government, we now have the flip side of that:  Those people pushing an agenda antithetical to individual citizens who claim their rights under the Constitution are working hand-in-hand with the government to destroy them.  The message from the institutional Left is clear: Get with the program or we will bankrupt you.

One priest, however, has come up with a clever idea that, if broadly applied, will bring that tactic to a complete halt. Father John Zuhlsdorf says that conservatives who don’t wish to have their freedoms of speech, religion, or association impinged upon by being forced to participate in ceremonies offensive to their core religious beliefs, don’t need to become martyrs.  Instead, with politeness and good cheer, they can disarm completely the Left’s economic terrorism:

When some homosexual couple comes to your Christian business for services at their immoral event, don’t panic. Go ahead and take their business!

Then explain what is going to happen next.

Tell them that the food and services will be just fine. And then inform them that all of the money that they pay for the services will be donated to a traditional pro-family lobby. If it is something like catering, where your employees have to be there to provide services, tell them that all your people will smile, be professional, and everyone of them will be wearing crucifixes and have the Holy Family embroidered on their uniforms. Then show them pictures of your uniforms. When the truck pulls up, speakers will be playing Immaculate Mary. Show them the truck and play the music.

“Oh, you would be offended by that? I’m so sorry. You approached us because we are Christians. Right? We are happy to provide services for you and we are grateful that you chose to come to our Christian catering business. We just want to be of help.”

Then tell them that you will take out an ad in the paper to let everyone know what you did with their money, thanking them by name for their business so that you could make the contribution.

Clever, clever man. I don’t believe that most business owners will even have to put on the whole dog-and-pony, totally-Christian show. It will be enough to announce to the happy LGBT couple that all proceeds the Christian business owners earn from the wedding will be donated to organizations supporting traditional marriage or opposing abortions.

We need more people to think outside of the box as Father Zuhlsdorf did. It’s inevitable that the Left attacks individuals.  Like the scorpion, that is its nature. Battering back at the Left works if one has heft, but for the individual in the Left’s cross hairs, destruction usually follows swiftly when faced with the full onslaught of ideological or craven politicians and judges, as well as the nation’s media. It’s so much smarter to act as Father Zuhlsdorf suggests and use the equivalent of judo against Leftist attack dogs, bringing them down thanks to the weight of their own charge.

UPDATE:  I was reading some of the comments at Father Zuhlsdorf’s blog, and a few those comments made the point that the Christians using this judo-esque approach have to be a little careful that they don’t find themselves charged with a different kind of discrimination — this one involving treating different customers differently.  Perhaps the business owner could circumvent this by appearing at all weddings with a pin showing support for traditional marriage, or by tithing to pro-life or pro-traditional marriage groups a certain percentage of all proceeds from any weddings to which the business owner provides services.  Creative thinking should be able to come up with a way to carry out Father Zuhlsdorf’s suggestion without creating more problems for oneself.