[UPDATE III, bumped:  The Weekly Standard says that a religious tone was the underpinning for the whole event (and I’m sure I’ll hear about that from Mr. Bookworm).  I will therefore give the Post and Times a full pass for emphasizing religion, although they would have done better to mention the other aspects of the gathering as well.  They both failed, though, to give a reasonable sense of the relative scale of the gathering:  the Times gave it a nothing headline, as if it was an insignificant event; while the Post really willfully implied that Sharpton’s gathering was the bigger of the two.]

To be honest, there’s nothing funny about the WaPo‘s internet coverage today.  Instead, it’s exactly in keeping with what one would expect.  I haven’t read the underlying articles, but I find the home page screen shot interesting: 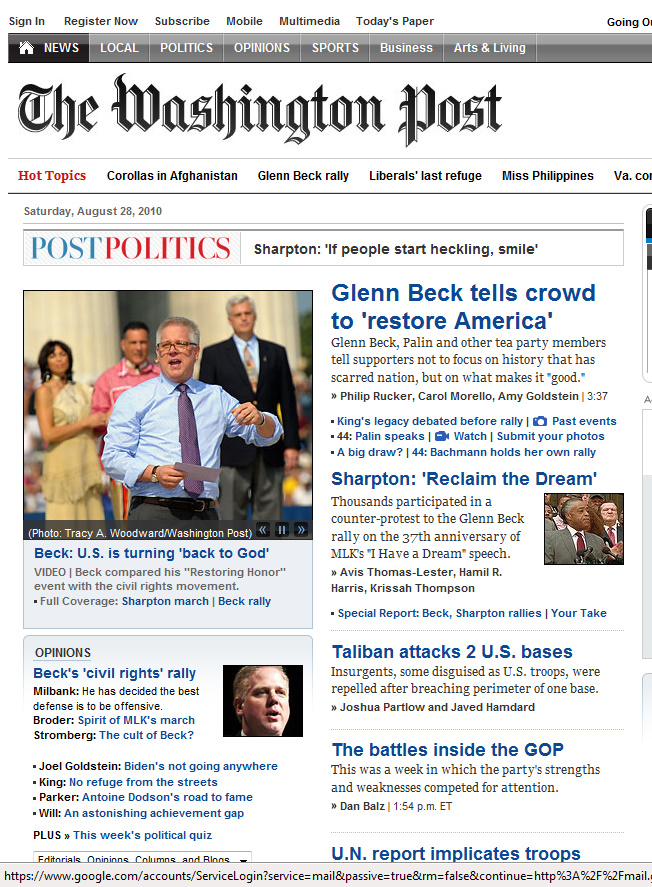 The front page coverage does a few Post-esque in trying to spin coverage:  First, it makes the Beck rally sound like a religious revival.  As you know if you’re a regular Post reader, the picture and caption in the upper left corner revolve, with different images and text. When I last checked (and it does change regularly), two of the three on the Beck rally managed to use “God talk.” The one I captured in the screen shot is a perfect example.

Second, the top stories include a couple of really nasty op-ed captions:  “He has decided the best defense [against what?] is to be offensive [apparently with God talk]”; and “The cult of Beck?”

Third, the cover page tries hard to hide the disparities between attendance at Beck’s rally and at the counter-protest Al Sharpton held.  The Beck snippet makes it impossible to tell if the attendance was big or small:  “Glenn Beck, Palin and other tea party members tell supporters not to focus on history that has scarred nation, but on what makes it ‘good.'”  Below this, the phrase “A big draw” is followed by a question mark.

The Sharpton rally, though, had “thousands” attend:  “Thousands participated in a counter-protest to the Glenn Beck rally on the 37th anniversary of MLK’s ‘I Have a Dream’ speech.”

I’ve been paying attention to the news, and the estimates for the Beck rally were that the crowd was in excess of 100,000 — possibly far in excess.  That would be a hideous number to reveal to those Post readers who merely skim the home page.  How much better to leave the impression that Beck gave a poorly attended, hate-filled religious revival, while Sharpton countered with thousands of people committed to “the Dream.”

As I said, I haven’t yet read the actual articles, and I can guarantee that many others won’t ever.  Their sole takeaway will be this home page that, through omission, obfuscation and genuinely-felt hostile opinion, manages to leave an impression that the big rally was a small revivalist meeting, and that the small rally was a big civil rights gathering.

UPDATE:  I focused this post on the WaPo coverage, because the rally took place on its own doorstep.  The New York Times coverage is equally dismissive and, again, turns the thing into a religious rally as evidence by this home page screen shot: 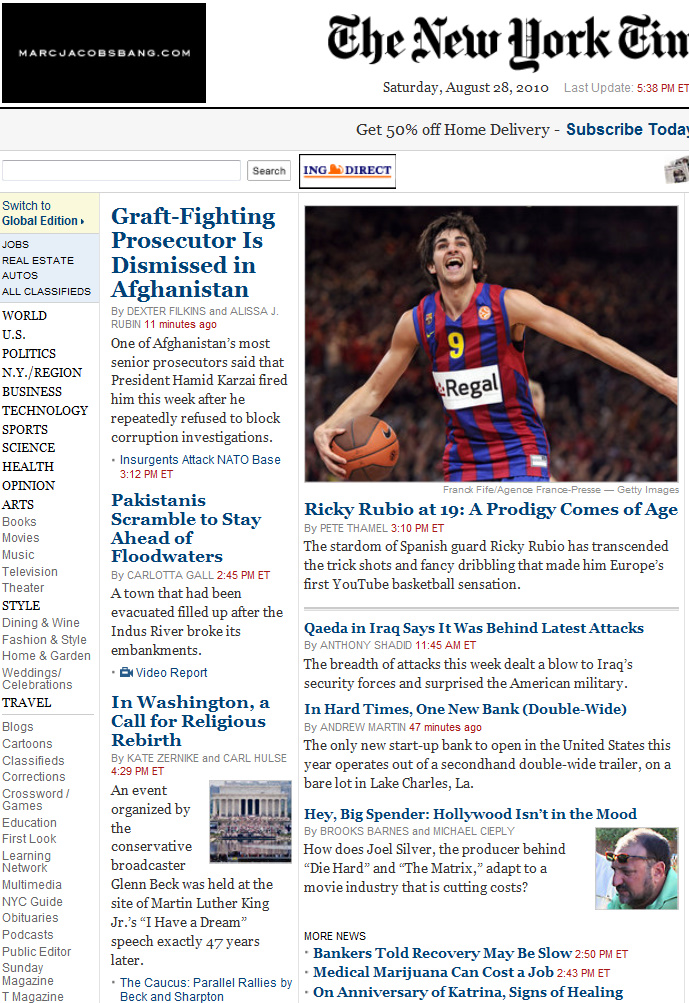 Incidentally, while the rally was significantly religious in tone, it was not only religious in tone, since it also focused on patriotism, the military, and self-government.  It also seems to have been universal in its religiosity.  That is, from Beck, there was “God talk,” not “Jesus talk.”  Indeed, Beck was careful to embrace all faiths.  Different orators, however, did speak of the Christian faith, probably because they were Christian.

UPDATE II:  Can anyone tell me how much “God talk” there actually was?  The MSM coverage makes it sound like a revival meeting with no other content.  Conservative internet sites haven’t yet pulled together the whole story, but I’m left with the feeling that Beck used the belief in God as a necessary prop for other American virtues, such as self-reliance, small government, high security, etc.

UPDATE IV:  Here’s the Sunday San Francisco Chronicle’s coverage.  Oh, wait.  Here isn’t the SF Chrons’ coverage.  On their online front page, the only references is in the automatically generated AP breaking news corner.  The Chron left the event off its own front page entirely.  (By the way, I know that the following screen shot doesn’t show the whole home page.  The rest of the home page, however, is also without reference to the event.) 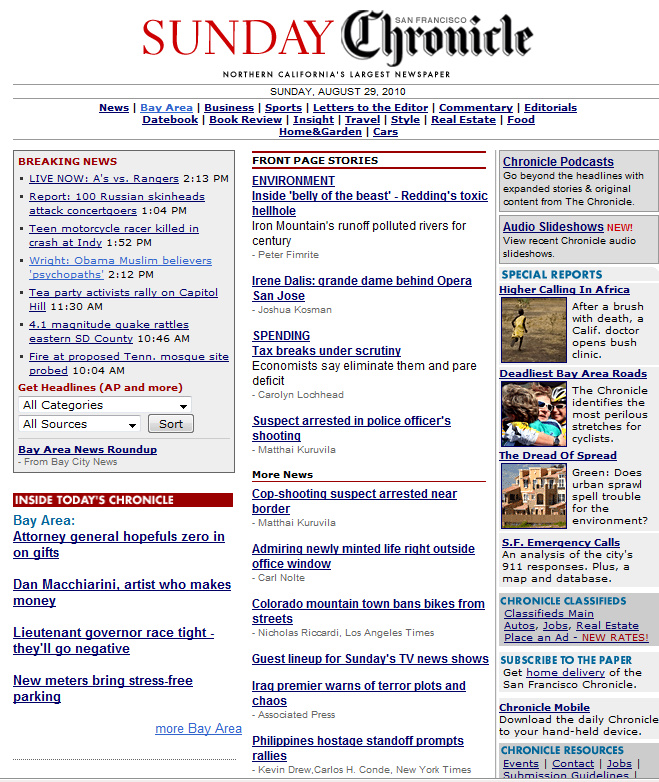