Some Democrats, either more honest or loose-lipped than others, have explicitly stated that, in making anti-Tea Party and anti-Palin statements about the Tucson shooting, they are attempting to replicate the stunning success they had with shaping the spin following the Oklahoma City bombing, back in 1995:

One veteran Democratic operative, who blames overheated rhetoric for the shooting, said President Barack Obama should carefully but forcefully do what his predecessor did. “They need to deftly pin this on the tea partiers,” said the Democrat. “Just like the Clinton White House deftly pinned the Oklahoma City bombing on the militia and anti-government people.”

Indeed, whole articles are now being written about Obama looking to the Oklahoma City bombing as an inspiration to reshape his ability to control the political agenda in this nation.  It is Obama’s 9/11 (and the Dems don’t mean that in a tragic way, they mean that in a politically opportunistic way).

I have mentioned before, haven’t I, that a defining characteristics of Progressives is that they live in the past?

Progressives live in the past when it comes to abortion, because they resolutely refuse to recognize that the stigma of unwed motherhood is gone and that remarkably effective birth control is here instead.  They live in the past when it comes to war, because, for them, all wars are the Vietnam War.  They live in the past when it comes to socialism, because they’re locked in a 1930s world that refuses to recognize the unparalleled carnage the socialism has wrought, whether by the National Socialists, i.e., Nazis (20 million dead, including 6 million in the gas chambers); the Soviets (tens of millions around the world, including approximately 20 million in the Ukraine and other rural areas); the ChiComs (50-100 million dead as a result of the Great Leap Forward); the Norks (God alone knows how many dead, since it’s a completely sealed country); the Cambodians (1 million dead, or 1/3 of the Cambodian population); etc. (you can identify and count the millions of et ceteras if you have the stomach for it).

The Dems are now proving that they also live in the past when it comes to their understanding about their ability to control the message.  They speak as if this is 1995, an era in which only a relatively small number of America’s more sophisticated citizens were joining the geeks who had access to that weird thing called “electronic mail.”  The World Wide Web had moved beyond being just a gleam in AlBore’s eye, but few citizens looked to it for news.  Mostly, the WWW was a kind of cool way to try to make hotel reservations in foreign countries.  The phrase “social networking” was more than a decade away.  The traditional media was still the only game in town.

In this bygone era, the old media’s hegemony was almost total.  Not only did it own the airwaves and the ink presses, but its management and its employees marched in lockstep.  Their man was in the White House, and they controlled the message.  The only fly in the ointment was that icky talk radio, especially that outspoken Rush Limbaugh, but they were confident that they could use their consolidated power and their total message control to disarm anything Rush had to say.

In this environment, spin was so easy.  Their President touted the party line — the Oklahoma tragedy occurred because of Rush and his ilk — and they won the debate, such as it was.  Nobody could get on the computer and hunt up old headlines and stories putting the lie to the media narrative.  Okay, that’s not quite true.  Maybe a few people who could afford the high cost of a Nexis search could but, even if they could get the information, they had no way to disseminate it.

This is still the world in which the current crop of Democratic/Progressive dreamers live.  Immediately in the wake of news about the Tucson tragedy, the Progressives swung into action.  “It’s all Sarah Palin’s fault, because she used cross hair imagery in her ads.”  “It’s all the Tea Partiers’ fault, because they are so angry.”  “It’s all Rush Limbaugh’s fault because . . . well, he’s Rush, and it’s always his fault.”

But a funny thing happened on the way to the MSM’s planned political massacre:  the new media.  I personally played a part in this, although only a small one.  Within a few hours of the accusations, my friends on my “real” facebook, almost all of whom are liberal because my life and education have taken place in liberal enclaves, started sounding the drum:  Palin, conservative hate speech and Tea Parties were at fault.

Because of my sadly homogeneous Blue, Blue, Blue political milieu, I tend to be rather low key in my views (hence the outlet that is this blog).   There is no mileage for me in offending neighbors, car poolers, educators, clients, etc.  I could not let these lies go, however.  I spoke up.  But I didn’t speak up with ill-considered insults.  Instead, I used social media to introduce people to facts readily available on the internet.

I explained without heat that Barack Obama has long had a tendency towards violent and inflammatory rhetoric (guns to knife fights; punishing enemies; forcing people to the back of the bus), but no one was calling him out on his words.  I pointed out (with links) that, because politics is a bloodless battle, but a battle nevertheless, operatives on both sides of the aisle repeatedly use war metaphors, such as target, cross-hairs, victory, defeat, War Room, etc.  I politely asserted (with concrete evidence) that George Bush was on the receiving end of the most violent imagery and desires in known political history but that, fortunately, he had the Secret Service at his back (and front and sides).  I noted the irony that Keith Olbermann, a man who routinely dehumanizes his political opponents by referring to them as “the worst person in the world” is a peculiar spokesperson for civility.  I tut-tutted, peacefully, about the fact that no one seemed to be upset by the fact that Obama’s pastor was renowned for his blood-thirsty sermons or that Obama counted amongst his friends a bomber who cheerfully admits that he has no regrets about his many efforts to kill American citizens.

Always polite; always backed up by the power of the internet, which forgets nothing.

What was gratifying about my little efforts was that there was no push back.  In each case, my politely fact-based observations shut down the thread entirely.  No one piled on.  No one challenged me.  How could they?  I owned the facts.  And I owned the facts because, while Progressives are engaging in 1990s spin, I was engaging in 21st century information gathering and dissemination.

When it comes to the Left, they’ve always had eyes but, blinded by their Leftism, they couldn’t see.  And now, thanks to the internet, they have words but, faced with facts, they can no longer speak.  Maybe, one day, the truth will set them free.  Until then, at least the internet will help shut them up. 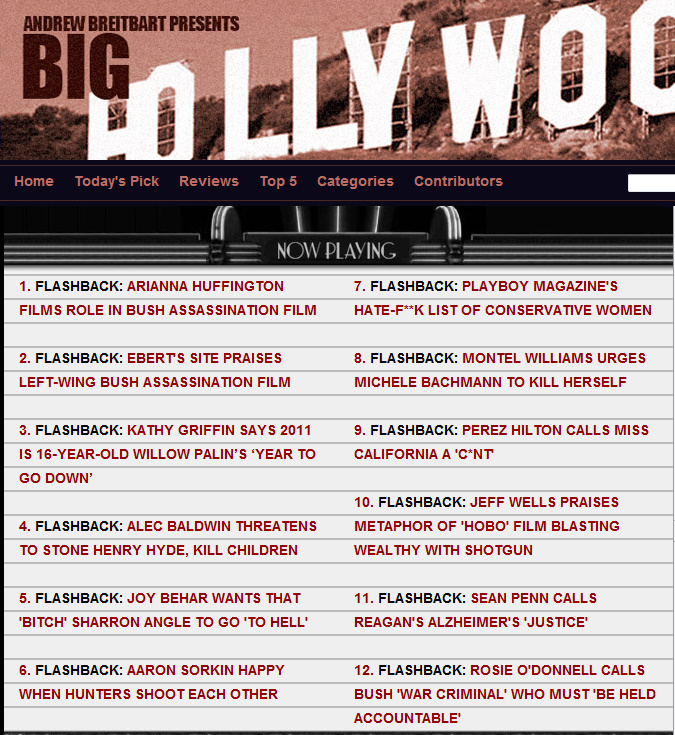 UPDATE (3:21 p.m. PST): Michelle Malkin doesn’t have to travel very far into the wayback machine to find examples of hate emanating from the Lefter side of the spectrum. Again, this is lovely, because this is the type of historic information that wasn’t available back in 1995, when the Lefts positioned themselves as holier than thou in a very successful effort to marginalize a legitimate political opposition.

UPDATE (3:24 p.m. PST):  And evidence from the SF Chron that, having — for the first time — been called on their bluff, Progressives are now backing down.

UPDATE (5:23 p.m. PST):  Patterico also has a winning collection of hate and hypocrisy from the Left.  Let me say again that I don’t think hate speech from either side of the aisle caused Loughner’s acts.  He was motivated, not by ideology, but by insanity.  This information is of interest only as a counter to the hypocrisy, attacks, and falsehoods emanating from Progressivex anxious to turn a tragedy into a political opportunity.