I’m a very casual person.  My children’s young friends are allowed to call me by my first name.  I’m invariably dressed in jeans or yoga pants.  I wear high heels about five times a year, and panty hose exactly that often.  We dine off of melamine plates and drink from plastic cups because they don’t break when you drop them.  (I do have lovely European style manners, though, and can party with the best if called upon to do so.)

My casual approach to life is fine because I’m a suburban homemaker.  I do not occupy a prominent and ritually important position.  I do not represent a company or a nation.  Barack Obama is our nation’s representative.  While I don’t expect the formality that characterized Louis XIV’s court, I do believe that part of his job description is to comport himself with dignity.  Obama has signally failed in that regard.

1.  Obama is willing to auction himself off for a few dollars.

I know this is true, because I got a solicitation in my email today:

Today, I want to ask if you’ll join me and three other supporters for a meal and conversation sometime soon.

Please donate $5 or more to be automatically entered for a chance to join me for dinner.

If this sounds a bit familiar to you, it’s because we’ve done this before. In fact, my hope is that I’ll be able to keep doing these dinners throughout the campaign.

Perry took umbrage at the charge that he’d sell out for $5,000 (or, he implied, any either amount of money). Obama, however, is willing to sell his dignity for just $5.

2.  Obama, like a high schooler, is asking people to let him know if he’s being insulted.

You’ve all heard now about the ridiculous Attack Watch, which is the ugly step child of Candidate/Senator Obama’s “Fight the Smears.”  Seth Mandel nails the immaturity behind it all:

But that [Fight the Smears effort] was a senator running for office. As odd as it was then, he’s now the president. Who in the administration thinks this is the appropriate way for a president to act? We’ve heard countless references–from conservatives and liberals–to the administration of Richard Nixon. But in truth, Nixon had a better grasp on politics than Obama. Most of the hubristic overreaches that got Nixon in trouble were things he tried to hide. Obama is openly promoting a program to “report” on private citizens.

3.  Obama doesn’t treat his office with respect.  Not the office of president, but the office itself.

Again, that behavior is a less than inspiring combination of classlessness and disrespect.

5.  Obama’s wife doesn’t quite grasp that she, too, is a representative of the people of the United States: 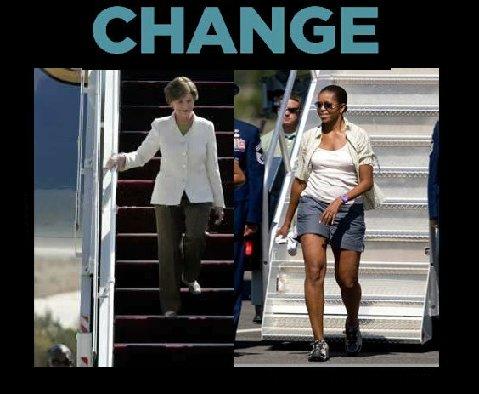 It’s no excuse to say that Laura Bush might be leaving the plane on a formal occasion, while Michelle is just on vacation.  Michelle is, at all times, the First Lady of the United States.  She’s not a suburban mom, and should never appear in public that way.

6.  Again, just like a high schooler, Obama publicly snubs people who are just too embarrassing to be around: 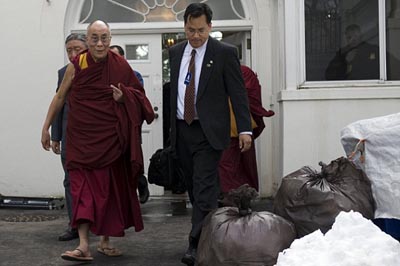 In the same vein, like a child, Barrie isn’t good at hiding his pique.

The idea of someone’s being a “statesman” is an old-fashioned notion and has pretty much been abandoned in the modern age.  A statesman isn’t merely a politician.  Instead, the term carries with it connotations of a true calling to serve the public and to behave in a way that is consistent with a nation’s highest aspirations.  Barack Obama is no statesman.  He’s a petulant, paranoid child (Paging Attack Watch:  there was just an insult here).  He lowers the standing of the entire presidency, not because of his policies, which are wrongheaded, but still supported by large numbers of people, but by the details of his conduct.