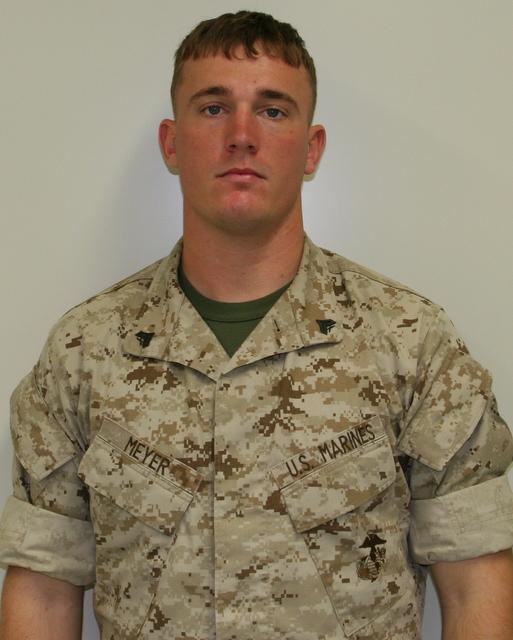 Navy One brought my attention to the fact that America’s 1st Sergeant once served with Medal of Honor winner Dakota Meyer.  I quickly headed over to the link, anticipating some reminiscences about Meyer.  Am’s 1st Sgt didn’t include any.  Instead, he repeated Meyer’s own words, spoken after the fact:

I didn’t think I was going to die, I knew I was. I was just going to keep fighting until they got me. I wasn’t going to sit there and lay down and let them win. That was the only thing on my mind was how to get those guys out. I would’ve done it again.

I was a little disappointed not to learn more about Meyer himself from one who worked closely with him.  This silence on  Am’s 1st Sgt’s part got me wondering what I was expecting to read.

Did I want to hear that, from day one, Meyer was marked by greatness, so that those who served with him felt it was inevitable that he would be awarded the nation’s highest military honor?  Reading things like that helps one come to terms with being ordinary.  “Hey, it’s okay that I’ve never done, nor will ever do, something special.  The ones who do something special are already tagged by God.”

Or perhaps I wanted to hear that Meyer, up until his moment of bravery and self-sacrifice was an ordinary Joe, just another good ol’ boy in the Marines, and that, while everyone liked him, nobody ever expected those vast reserves of raw courage.  That’s also a good one, because it says that, until we are tested, we don’t know who or what we are.  Sure, I’m just a stealth suburban blogger, hiding my true identity from those around me but, if push comes to shove, I too am capable of stepping outside my own fears and limitations.

These aren’t just random thoughts.  They actually started a few days ago when I saw this video:

The video shows an accident scene in Logan, Utah.  A motorcyclist plowed into a car, his motorcycle burst into flames, and he slid under the car, unconscious.  The burning motorcycle made the entire scene dangerous.  The bystanders, instead of running away, investigated the scene, analyzed the risks to the motorcyclist (refrain from moving an injured man lest one causes worse injuries or run the risk that the car will explode) and then, having decided that immolation was the greatest risk, in one huge frenzy of energy, flipped the car over and dragged the motorcyclist out.  They saved the motorcyclist but, at the same time, each and every one of those bystanders risked death or injury.  None of them, I’m sure, went to work that day assuming that they’d be faced with that kind of decision-making.

In England a short while ago, it was a 22-year-old woman who showed physical and moral courage.  Two drunken thugs were brutally beating a man in public.  People drove by or watched.  Twenty-two year old Aimee Yule, a taxi dispatcher, chased the thugs away, administered help to the injured man and, when the thugs returned, actually used physical force against them.  Ms. Yule’s own thoughts on the subject bear noting:

She said outside court: ‘I couldn’t believe no one else was stopping to help him, there were loads of cars going past.

‘People were stopping and calling ambulances and the police, but no one came over. He got knocked out and there was blood coming out of his mouth.

‘When I approached they moved away, but they kept coming back to kick him.

‘One of them ran towards me and lifted his hand but I stood still and told him to leave. Luckily, he never hit me.

‘I was just sitting with him trying to stop them. I said “that’s enough, he’s had enough, please just leave it.”

I couldn’t believe more people had not stopped, cars had to swerve round them and some had stopped at the other side of the road to watch, but nobody came to help.’

Miss Yule said the incident left her badly shaken. She added: ‘I wouldn’t normally get involved with something like that, but I just thought, that’s somebody’s son being stamped on in the middle of that road.’

Bravery, then, seems to be an amalgam of moral courage and low brain function.  Think too much, and it’s all over — you can always talk yourself out of the risk.

The Logan scene notwithstanding, crowds also seem to inhibit courage.  I became aware of this several years ago when a crowd of people stood around and watched as a deranged man stomped his two-year old son to death on a public road.  The bystanders all seemed to be watching each other for cues.  Each was apparently wondering whether s/he was reading the situation correctly or was running the risk of public humiliation through overreaction.  And each person, by worrying about the others’ responses, stood paralyzed as a child died.

These stories are one of the reasons I love MMA.  I’d like to think that if, God forbid, I’m ever confronted with the need to act, I’ll have drilled sufficiently that I’ll be able to dive in without thinking.  It’s the analysis paralysis that worries me, since I’m an over-thinker at the best of times.   I work hard so that I’ll do the right thing, instead of berating myself later for failing to act at all.