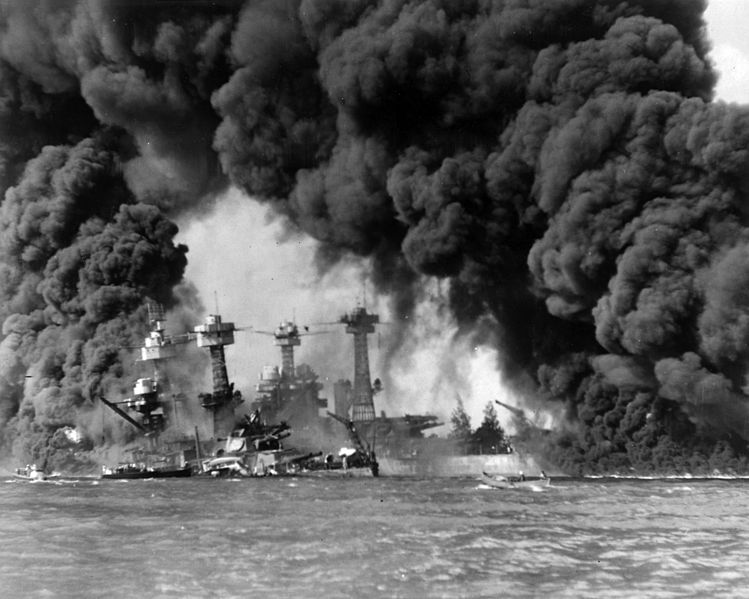 Back in 2004, entirely coincidentally, I ended up at the WWII Memorial in Washington, D.C., on the same morning that veterans of the Battle of the Bulge had gathered for a reunion. Some got there under their own steam. Many, though, were on walkers or in wheelchairs. They were so frail. And so many were weeping. It was that weeping that did me in. I seldom cry on my own behalf, but I’m a sympathy weeper. Watching these old, fragile warriors break down under the weight of their memories got my tear ducts working overtime.  I still get watery thinking of those men who not only fought one of the most important battles of the war, but who then came home and honored the dead by living.  They had families, held jobs, and generally gave meaning to the freedom for which they fought.

I mention this little story because there are people out there, especially in the entertainment world, and more specifically on the set of Hawaii Five-O, who do not share my reverence for these aged warriors (free registration required):

Last week, a special group of Americans made a trip to Hawaii. This was not their first trip to Hawaii. In fact, the first time all of these men were together in Hawaii was on December 7th, 1941.

Last week, these men and some of their families were back in Hawaii again for the 70th anniversary of the Pearl Harbor attack. Today, less than ten percent of those who served during World War II are still alive.

For the men who made this trip, there was also another tacit acknowledgement. This would be their last trip. The average age of a Pearl Harbor [veteran] is in the early nineties. In fact, there are now so few Pearl Harbor survivors left that the Pearl Harbor Survivors Association is disbanding at the end of the month.

While the men were at the cemetery, the TV show Hawaii Five-O was filming at the cemetery. As the National Anthem was played and the ceremony went on, the CBS production crew was filming. At first they told the veterans and their families to hush, then repeatedly pushed them back and finally told them to hurry up. As the veterans were laying roses on the graves of their fallen comrades, a production employee walked through the middle of the ceremony telling them to hurry up.

Perhaps the ultimate insult came at the end, when someone with the veterans group asked if one of the cast members of Hawaii Five-O could come over and say hello to the group. The production crew refused.

These World War II vets are a tough bunch. They went through the first depression and then the Second World War. I can guarantee you they did not let this incident ruin their trip, though some of their family members might feel differently.

CBS has issued a carefully nuanced statement claiming they would look into the incident and throwing out some boilerplate language about how they respect the veterans of World War II.

Stefffan Tubbs, who was there, provides more details about the Hollywood thought process on display:

I decided to take a closer look at the production area from the public thoroughfare and walked closer to see catering trucks, grips, associate directors, production assistants, lighting workers, countless minions and the lead director – a Hollywood-looking middle-aged man wearing a black “AD/HD” t-shirt, a play off the rock band “AC/DC.” I stopped well behind the cameras and out of view when a local production assistant politely told me to keep moving. I was not happy and told her we had WWII vets who would likely be in the area. I was told, “Sorry, sir. We rented this part of the cemetery today.” My blood started to boil, but I remained calm and moved on. As I stood behind the tent, the director yelled at everyone to: “Get out of the line of sight! If you don’t belong here, clear out!”

I made sure to go where I was basically invisible, 40 yards from the nearest camera when the director heatedly walked to me. He was not happy.

“Can you please move?” he said sternly.

“OK,” I said. “Where would you like me to go? I have Pearl survivors who are here visiting their fallen comrades at a public cemetery.”

He couldn’t have cared less and told me that if we stood behind a tent, that would be fine. He walked away completely frustrated and yelled at a local assistant: “I am doing YOUR job! You wanna come back here again? Do your job!” I felt sorry for her. It wasn’t her fault a group of vets actually came back for a realreason to this cemetery. Having been around a few movie sets, I knew this was how they were especially if the scene was behind schedule, etc. Keep in mind at this point I was alone. It wasn’t as if our entire entourage was milling about. There was only one veteran anywhere near me and was walking toward me from up the road.

Walter Maciejowski, 90, from Massachusetts soon caught up and I quickly tried to run interference so he wouldn’t get yelled at as he stood there in his cream-colored Pearl Harbor Survivors cap. Walter was clueless and was just amazed at the technology. He whispered in my ear as the scene was about to begin 75 yards away. We both stood exactly where the director had told me to stand.

I told Walter we had to go, and we started to walk away as lead actor Alex O’Laughlin and Terry O’Quinn from Lost did their scene. As we moved out, yet another woman came up to us and with a fake smile told us Walter couldn’t take any pictures.

“Our actors get very skiddish [sic] around still cameras, sir.”

“Funny, and yet they act in front of them,” I said, ticked off because we were already leaving.

I wish he hadn’t done it, but Walter asked if they by chance had a hat for him. To his face, she said, “I doubt it but I will try.” She never did.

You can read the rest of this eyewitness narrative here.

This whole thing falls into the category of I see it, but I don’t believe it.  It’s impossible for me to understand the mindset of louts who are either so callously self-involved or so Progressively propagandized (or both) that they are unable to support old men on a last pilgrimage to a defining moment in their youth — a defining moment, moreover, that was not only one of the more savage acts in a savage century, but that also paved the way for a freedom that blessed Europe (until it squandered that gift) and was the making of a very successful modern Japan (which then decided to stop having babies).

UPDATE: In the first comment to this post, Don Quixote points out that Hawaii Five-O is fairly military-friendly in content, something that I respect and appreciate.  I can’t figure out if that fact makes the cast’s and crew’s behavior at Pearl Harbor more or less unpleasant.  It’s like discovering the worms under a rock (with all due respect to bookworms, of course).  I guess I shouldn’t be surprised.  Back in Hollywood’s golden days, the studios employed vast numbers of publicity people to make sure that people didn’t learn that the stars of wholesome, family friendly movies lived somewhat debauched lifestyles.

A little information from the world of TV.  Whether it mitigates or not is up to you, but here’s what happened.

1) Whoever – in Hawaii – it is who schedules events at the cemetery is a retard.  (Dear Editor: I don’t actually care about the political incorrectness of using that word, it’s apposite, it stays.)  Or, perhaps it was a screw-up on the part of the scheduler for the vets.  Either way, some dingbat somewhere dropped the ball and allowed the two groups to be occupying the same space at the same time.  This unfortunate confluence was the fault of neither group – blame whoever has the appointment books.

2) CBS has no idea what the complaints they’re suddenly receiving are about, so idiot boilerplate is their best – maybe only – response.  They don’t actually have a production company in Hawaii – or much of anywhere else these days.  I would be astounded if it was an actual CBS production company.  The people who own, produce, and deliver that show to CBS for air do not work for CBS.  They are an outside, independent production company that exists as an entity for the purpose of making episodes of the show – most of them have never been within a thousand miles of Black Rock.  That production company hired that director – and everybody else on set – to make that episode.  The director is a production company employee – for that episode – and he may make all the episodes, (a probability rare to the point of vanishing), many of them, some, few – or this may be his only one.  He’s a jobber.  When you complain to CBS about him, they’re going to say, “huh?  Wha…?”  They didn’t hire him, probably don’t know him, may never have heard of him, and he ain’t their problem.  (The network doesn’t know or care about the labor, they only want to see the baby – in time for it to go out when it’s scheduled to.)

3) The production company got seriously shafted on the cost to film in the cemetery that day.  How do I know?  All production companies always get shafted on fees for the use of locations, because everybody in the world – including people who should know better – begin having visions beyond the dreams of avarice when they see Hollywood coming.  And the biggest shafting is the make-it-up-on-the-spot insurance premiums for filming on location.  If there’s a blade of grass out of place, or a broken twig on a tree after the production company wraps and leaves, you cannot fathom the megillah this is.  (Which is why they film in studios and on lots, and in Canada.  It’s why studios and back lots came into being in the first place: to avoid the never-ending problems of locations.)  The PAs all knew that if anything remotely definable as “damage” happened to any part of the cemetery or its grounds – even if committed by a Pearl Harbor veteran or somebody else – they would be the ones turning on a spit over a hot fire,

None of which excuses the shitty attitude of these overpaid, well-tanned, tower of ignorance trolls, but it may make it a bit – a microscopic bit – understandable, or maybe explicable.  The fact is most of them, being products of American education, never heard of Pearl Harbor.  Factor in the self-centeredness engendered by hanging around Hollywood, and you have a group that’s only rarely in touch with where they are.  The director, probably the senior guy present (at least on the on-the-spot management ladder, could have been gracious and understanding.  The actors as well – neither of whom I know – could also have brought matters to a halt for a respectful pause.  (Tom Selleck or John Hillerman, speaking of people who filmed in Hawaii for CBS, would have.  [Selleck would have stopped the scene, and worked out a way to get the Pearl Harbor vets into it, as objects of deep respect and honor.]   I wouldn’t know either of the two clowns mentioned above if I fell over them.