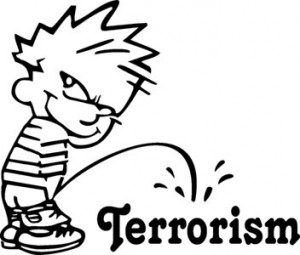 Boys are born equipped with this neat little toy.  Amongst its many enjoyable attributes, you can write your name in the snow with it.  There are lots of other things you can do with it.  Long hikes without pit stops?  No problem.  Use a tree or, if you’re adventurous, see if you can fill the Grand Canyon.  Long drive without pit stops?  No problem.  That’s what empty soda bottles are for.  Object that offends you?  Well, if you’re adrenalized, testosteronized, and hanging around with the boys, that might not be a problem either, ’cause you can whip out your toy and make a statement (warning:  slightly graphic and definitely NSFW):

I certainly don’t approve of what those guys did.  It’s vulgar, and I’m opposed to vulgarity on principle.  It’s stupid, both at a micro level and, as the recent headlines show, at a macro level.  It’s a typical example of group think.  I routinely tell my children to be very careful when they’re with a group, because there’s something about a group mentality that causes massive IQ loss.

The one thing I’m not is outraged.  This is not systemic abuse of the type that surfaced in Abu Ghraib.  Nor does it cross the line from stupid and vulgar into terribly abusive.  Terribly abusive would have been a video of these men doing the same thing to living prisoners.  Having Al Qaeda types — the ones who like to slice of men’s cool toy and stuff it in the victim’s mouth, or who videotape themselves beheading people, or who torture children to death, or who gang rape women, or who blow up school buses, etc. — having these types express outrage over this alleged “barbarity” only serves to highlight just how innocuous what these young men did really was.  Crude?  Yeah, sure.  But also innocuous.

I’m also not alone in my lack of outrage.  Even liberal Washington Post readers are unimpressed.  As of this writing, 82% of them think “It’s not surprising — things like this happen in war,” while only 11% find it an “unacceptable desecration” and 7% an “embarrassment.” Americans understand that boys will be boys, they understand that boys will always have their toys, and they understand that, under actual combat conditions, men make foolish decisions that nevertheless do not qualify as war-time atrocities.

UPDATE:  In Comment 2, DQ, who my best friend and someone I admire greatly, disagreed with my rather cavalier dismissal of the Marines’ conduct.  He stated “I am outraged,” and then explained why.  I countered by explaining why I did not consider what happened an outrage.  Later, it struck me what the difference was in our approach to this video.

As I mentioned in my Michelle Obama post, grammar matters.  When it comes to the response to peeing Marines, one has to remember that the word “outrage” functions as both a noun and a verb.

DQ is totally within his rights to feel outrage.  The verb is his own response to a crude, vulgar, and stupid incident.  It marks him as a man with higher, more refined feelings.

I, however, was not really talking about my own feelings when I posted about the Marines.  I was talking about the noun, rather than the verb.  In the theater of war, and especially in the theater of war propaganda, it is a mistake to call what happened “AN OUTRAGE.”  That elevates the Marines’ conduct to an atrocity or a war crime in terms of their risk of court martial and in terms of the animus America’s enemies direct against her.

When the US government and the Pentagon, instead of issuing a dry “their behavior was inappropriate and they will be dealt with,” starts apologizing as if the video was the crime of the century, that allows the enemy to justify ever greater efforts against American troops.  “They peed on our dead.  We’re going to torture them, behead them, blow up their women and children, etc.”

My post was about proportionate response.  I therefore made in my own mind a distinction between being outraged and categorizing something as “an outrage.”  This distinction is an important factor in figuring out where bad behaviors (and there will always be bad behaviors) belong on the scale of military scandals.