One of the most iconic British World War I recruiting posters had as its goal shaming slackers into enlisting by reminding them that, at some future time, their children would want to look up to them for their war service: 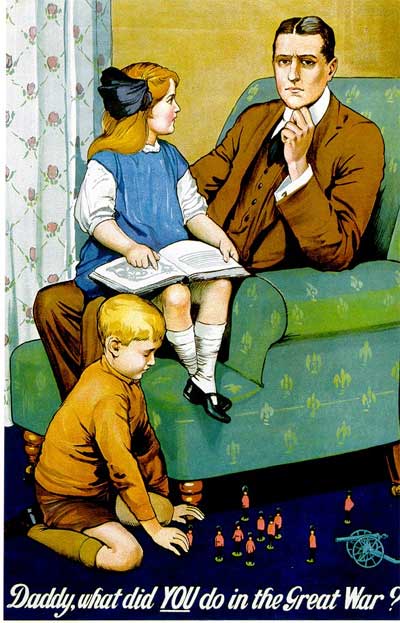 The Obama administration has just added a whole new twist to the concept of what constitutes memorable, boast-worthy service during war time.  The administration is putting together a special dinner party to mark the war’s end.  Since it obviously can’t invite every one of the men and women who have served over the past nine years, it’s put together a checklist for qualities the putative dinner guests should meet.

Now, if I were putting together this checklist, I might look at such things as bravery in battle, contributions to moral, dedication, etc.  Apparently, though, I’m stuck in the wrong war, in the wrong century.  Blackfive sets me right:

The military was always the place for people to succeed in ways that they may not have had the chance to in civilian society.  Whether grunt, medic or quartermaster, the military was a place where you succeeded based on the merits of your ability, your hard work.

That’s why I get really really pissed at the Obama Administration when I see things like this – this posting at the Daily Beast POLITICO via This Ain’t Hell about the guest list of enlisted military members for a dinner party to mark the end of the Iraq war (OIF):

The list is being assembled by the senior enlisted representative for the five service chiefs, and the goal is a mix that is racially diverse, old and young, gay and straight.

Hey, congrations Master Chief, you’ve been selected to dine with the President because you’re the oldest Sailor in DC area who served in Iraq?!

Hey, Gunney, because you’re gay and worked at Balad, you get to meet the President?!

(Read the rest here, both ’cause it’s really good and because it suggests a much more appropriate guest list.)

Can you imagine the hysterical laughter and disbelief in the British War Office during WWI if the correct answer to the child’s question (“Daddy, what did you do in the Great War?”) was “I was gay” or “I was the oldest person in my unit” or “I had a Hispanic surname.”  There’s nothing wrong, of course, with being gay or old or Hispanic, but they are not the primary indicia of noble service to ones country — except, of course, in Obamaland.

I’m sorry to say this, but our Commander in Chief is a joke — a very bad joke.  I’m pretty sure, though, that this is one joke that would not make Martin Luther King laugh.  I believe it was he who thought the best criterion for judging a person wasn’t by looking at the color of his skin (or his sexual preferences or his age), but by examining the content of his character.  That sure goes double and triple for those who have served and who, unlike most of us, have been given the rare opportunity to learn about and put to use the best part of their characters.