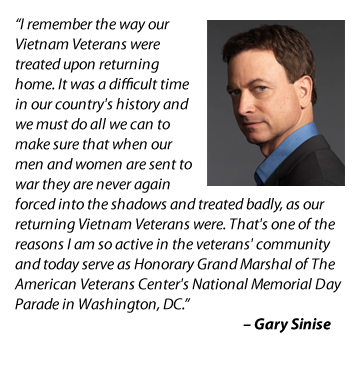 Memorial Day is quickly approaching, and to most Americans, this means the beginning of summer. In reality, it’s the one day of the year we dedicate to remembering those who gave all to protect the freedoms we cherish. As you plan your first barbecue of the season and prepare for the warm weather, I urge you to keep in mind the real reason we celebrate Memorial Day: to pay tribute to America’s veterans and fallen soldiers.

I remember the way our Vietnam Veterans were treated upon returning home. It was a difficult time in our country’s history and we must do all we can to make sure that when our men and women are sent to war they are never again forced into the shadows and treated badly, as our returning Vietnam Veterans were. That’s one of the reasons I am so active in the veterans’ community and today serve as Honorary Grand Marshal of The American Veterans Center’s National Memorial Day Parade in Washington, DC. I’m writing today because this year’s parade is our first public opportunity to honor our newest generation of veterans, the young men and women who bravely served in Iraq, sacrificing family relationships, jobs, and economic stability to go off and fight for our country.

Will you join me in paying tribute to our Iraq War veterans and all of America’s veterans and active duty service members by marching in the National Memorial Day Parade on May 28? You can’t come all the way to Washington, DC, you say? You don’t have to travel to take part in this special tribute, because we’re holding a virtual parade online! Follow this link to register, select your avatar and join thousands of patriots across our nation to honor America’s veterans from the Revolutionary War up to the Iraq War.

Freedom isn’t free, but for nearly 70 years, Washington, DC, was without a parade on our Armed Services’ most sacred day. In 2005, the American Veterans Center revived the tradition of a Memorial Day parade in our nation’s capital, and today it serves two vital civic purposes: to give the general public the opportunity to honor our service members and pay tribute to our veterans, while allowing active duty troops, veterans, and re-enactors showcase the sacrifice of all our veterans in an exciting procession of American history the whole family can enjoy.

Whether you live in the Washington Metro Area and plan to attend this year’s parade or you live as far away as Hawaii or Alaska, I encourage you to join us on May 28, 2012, to honor America’s veterans, including the 4,487 American service members who gave their lives in the Iraq War.

Please follow this link to register for the virtual Memorial Day parade and join thousands of veterans, active duty troops and civilians across America to pay tribute to our veterans.

With your support and participation in the virtual parade, we’ll promote our veterans’ legacy, remember those who gave all, and preserve their sacrifices. Thank you in advance.

P.S. Celebrate Memorial Day 2012 and honor America’s veterans and active duty troops by marching in the National Memorial Day Parade online. Follow this link to register, select your avatar, and join millions of your fellow patriots on May 28, 2012.