I tend to shy away from predicting the future.  If I’m right, the future was probably so obvious that everyone else had the same prediction.  If I’m wrong, I should have known better, and I end up walking away sadly scraping the egg from my face.

All morning, though, I’ve been toying with a post about the fact that I think November 2012 is going to be a blow-out election for Romney.  Originally, I thought he’d run a competent campaign (I’ve always had faith in his competence) and sort of ooze by Obama in a small victory.  With five months to go, though, I started revising that thought.  Day by day, especially this week, I’ve had a bizarre mix of metaphors running through my brain:  the walls are caving in, the dike is cracking, the avalanche is beginning its descent, etc.  Regardless of image, the point is the same:  a slow breakdown in a system is followed by a speedy collapse.

Politically, one of the best examples of the speed with which entropy occurs when a natural or man-made organism runs out of the energy to hold itself together is the Soviet Union’s collapse.  It was only in retrospect that people understood how rotten and fragile the USSR was.  It had been sold to us as a nation and political system every bit as hardy as the United States.  That’s why, in establishment eyes, Reagan committed the ultimate sin when he called the USSR an Evil Empire.  The establishment thought to itself “Never wave a red flag in front of a raging bull.”  Reagan, however, knew two things.  First, that something rotten to its core will disintegrate at the slightest touch and, second, that the USSR was just that rotten.  Reagan, and then Bush 41, tapped and tapped and tapped away at the weakened Soviet carapace and then, overnight it seemed, the Wall fell and the Iron Curtain vanished.

Precisely the same thing is happening with the Obama campaign.  It is imploding.  It was a bubble, a facade, a Potemkin village.  It’s essential fragility is making itself increasingly obvious.

I thought that earlier today and then I had that thought reinforced when I wandered over to HuffPo and saw this front page: 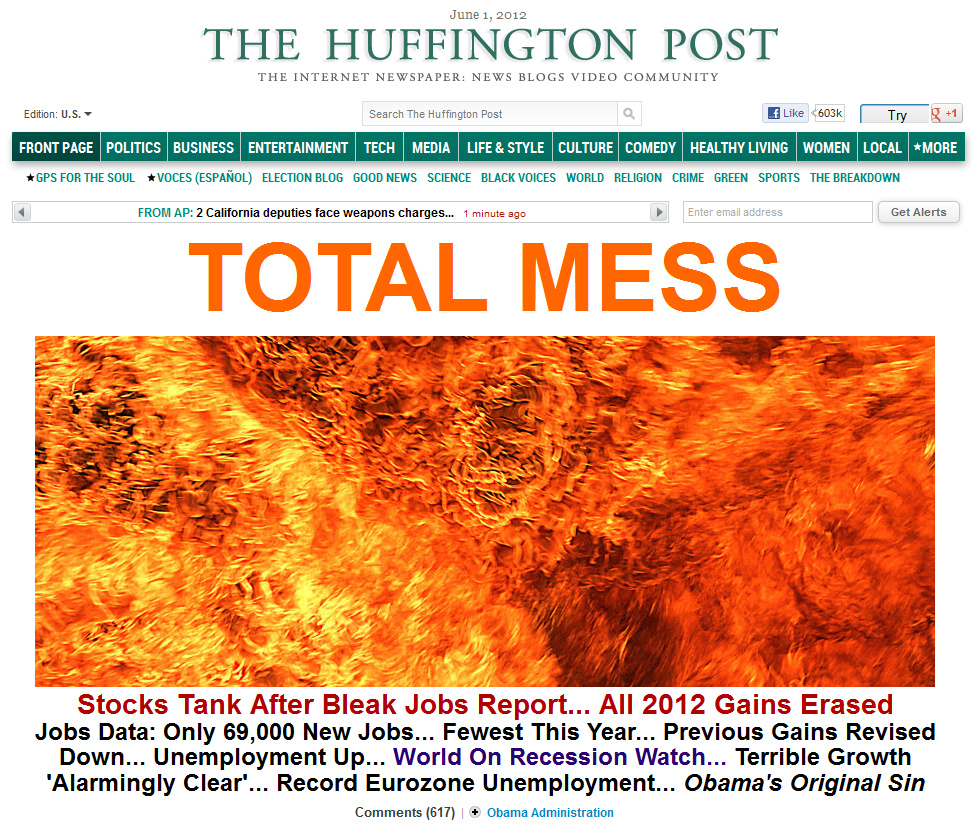 Keep in mind as you look at that screen shot that HuffPo one of Obama’s friends.  But it’s also a business (even though it’s run by people who view business as an activity for them, the elites, but not for all the peons who need to be under government control).  And a business goes with a big, big headline:  Total Mess.

“Total Mess” doesn’t just describe the world economy on Obama’s watch.  It describes the Middle East on his watch.  And it describes his own implosions:  the boastfulness, the arrogance, the ignorance, the viciousness. The campaign is stumbling from one incompetent moment to another.

Those closely allied with Obama are falling too.  Watching the Elizabeth Warren debacle, which has finally made it to the MSM, is almost embarrassing.  She can’t open her mouth without humiliating herself with another stumbling lie or explanation.  The only thing that saves the Warren spectacle from being truly embarrassing, as opposed to almost embarrassing, is the fact that Warren had this downfall coming.  An academic and political career built upon dishonesty and arrogance should flame out spectacularly.  The people of Massachusetts may yet step in to save Warren, but the public humiliation will never go away.

And how about the Wisconsin story?  It’s not just that Gov. Walker leads in the recall polls.  The really big story is that, given the choice not to join public sector unions, workers aren’t joining those unions, and they’re not joining in droves.  This means that, for all the corruption at the top — both within the State House and the Union shops — the ordinary workers didn’t feel they were getting a benefit.  If they had, they would have checked off that little contribution box without the necessity of political coercion.  Perhaps people are starting to figure out that, when the union bosses raise the funds that put the politicians in office, who then pay off the union bosses, the only ones who benefit are the politicos and the bosses.  The reality is that nobody likes either of those groups very much.

More than Obama’s flame-out, we’re also seeing Mitt Romney run a nimble, aggressive, and likeable campaign.  His team is getting responses up in minutes or hours.  Romney himself, having been shaped in the primary crucible, is more fluent in his speech and more accessible in his presentation than he’s ever been before.  He’s also adroitly side-stepping each of the traps that the Obama-ites think that they’ve oh-so-cleverly baited for him.

The snowball is rolling bigger and faster.  The avalanche is going from a whisper to a thunderous roar.  The dike’s cracks are widening into unstoppable failures.  Romney will win and Obama will lose.  And the win will be big and the loss will be a significant blow to Progressive politics.  To finish on a schadenfreude note, I will not regret seeing the most arrogant man ever to occupy the White House, and moreover a man whose arrogance was completely unjustified, take a well-deserved and public fall.