The chronology has been simple.  On September 11, 2012, a mob attacked our Cairo embassy, which promptly apologized to the mob.

Also on September 11, 2012, a well armed Al Qaeda group attacked our consulate in Benghazi and murdered four people, including Ambassador Christopher Stevens, who was there as the embodiment of the United States.

Within a short time of the Benghazi attack, both Obama and Hillary said that they were really, really upset — and apologized to the mob.

By Friday, riots were breaking out all over the Muslim world, as well as in Europe’s capitals.  A British news outlet, the Daily Mail, had a great photo essay showing rampaging mobs and burning embassies.

After the second apology, Mitt Romney, who is running for president based upon his claim that he can handle situations better than Obama (who, as Hillary promised during the 2008 Democrat primary, slept through the 3 a.m. emergency), made a statement:

The Obama administration’s first response was not to condemn attacks on our diplomatic missions, but to sympathize with those who waged the attacks.

Romney’s statement is entirely accurate.  Both Hillary and Obama talked about their feelings, and then said that the United States doesn’t countenance saying mean thinks about Islam.

Faced with this unprecedented crisis, the American media reacted immediately and in the strongest terms:  they condemned Romney.  The attacks themselves?  Meh.  Article after article was filled with scathing indictments of the real horror that occurred that week, and it was riot and murder.  Romney was the problem, something that Joe Scarborough stated most succinctly:

SCARBOROUGH: Mitt Romney. If Mitt Romney had kept his mouth shut, if he had not acted like a rank amateur, if he had not embarrassed himself–and by the way internally the campaign understands they screwed up, he’s moved on, they know that. So no conservative can say “oh, the mainstream media, blah, blah.” They know how badly they screwed up, and they were having the fight internally before he even went out and did it. But Romney got in the way of the media looking at the president, going, wha-, wha-, what happened here? How did this happen? Now, those questions are going to be asked in the coming weeks. But they weren’t asked in the first 24 hours because Romney was holding this horrific, irresponsible, press conference.

By Saturday morning, the day after Friday’s day of flame, the San Francisco Chronicle decided that the whole thing was too much effort.  Here’s a thumbnail screen shot I grabbed showing its main stories for Saturday, September 15, the day after the riots.

If you click on the thumbnail to see the full text, you’ll notice that there is not a single story dealing with any of the week’s events in the Middle East.  I had expected that a “main page” story would be something along the lines of “U.S. Embassies Threatened Around The Globe.”  The same holds true for today’s — Sunday’s online edition of the paper — which one might expect to have some sort of wrap-up of the week’s events abroad.  But . . . nothing: 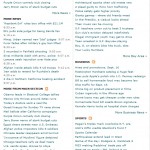 In retrospect, it amazes me that I can still be so naive.  The media will do anything for Obama.  They will, cheat, steal, and, if they can’t do any of the above, they’ll just suppress the news entirely.  If you’d been out the reach of any media from Tuesday through Friday, and the first online paper you checked out was Saturday’s Chron, you would have no idea that Obama’s pro-Muslim foreign policy had explosively imploded.

We have always been at peace with Oceania.  Emmanuel “the Mitt” Goldstein is the enemy.  Please prepare yourself for your daily two minutes of hate.