[Update:  I thought I’d managed to ooze so much sarcasm here that I didn’t need to establish first that I was being sarcastic.  From comments I’ve received, I’ve learned that a failed in Writing 101, because I did not make my sarcasm t obvious enough.  My apologies.  I know that Obama dislikes Israel.  He always has (we can certainly make educated guesses about the contents of that missing Khalidi tape) and he always will.  I was just trying to show that Obama is now dropping even his slender pretense of being Israel’s friend in the White House.]

Obama went on 60 Minutes this past Sunday and had a few choice words about Israel.  For one thing, he characterized Israel’s existential fears (as in “If Iran gets a nuclear bomb, we cease to exist”) as “noise,” which he works hard to ignore:

STEVE KROFT: “How much pressure have you been getting from Prime Minister Netanyahu to make up your mind to use military force in Iran?”

PRESIDENT OBAMA: “When it comes to our national security decisions—any pressure that I feel is simply to do what’s right for the American people. And I am going to block out—any noise that’s out there. Now I feel an obligation, not pressure but obligation, to make sure that we’re in close consultation with the Israelis—on these issues. Because it affects them deeply. They’re one of our closest allies in the region. And we’ve got an Iranian regime that has said horrible things that directly threaten Israel’s existence.”

Now, some might say that referring to Israel’s concern about a second Holocaust as noise is pretty good evidence that Obama is no friend to Israel.  However, his supporters, whether direct employees or media shills, assure us that Obama simply misspoke:

But according to White House spokesman Jay Carney, what you really heard was Obama professing his deep and unwavering affection for Israel, his his best friend in the world:

“The president was making clear that his commitment and this country’s commitment to Israel and Israel’s security is as strong as ever and unbreakable in nature,” Carney said. “There’s obviously a lot of noise around this issue at times. His point was clearly that his objective is to take every step possible to enhance Israel’s security as part of our strong relationship with Israel. It is demonstrated by the unprecedented level of cooperation this administration has had with Israel on matters of defense and security.”

Carney’s explanation bears little resemblance to what Obama actually said, but it doesn’t matter — we expect the press to report this uncritically, then lose interest in the story until it’s time to “fact-check” a Republican for taking Obama’s remarks “out of context.”

Poor Obama. It’s tough to live up to the expectations you set when you became the most skilled rhetorician in America since Lincoln to occupy the White House.

Because I’m in a forgiving mood, let’s take Carney’s lame excuse at face value. The Great and Mighty Obama would never ignore Israel’s genuine concerns. He loves that country. Or does he?

I’m sorry to say this, folks, but I’ve finally found definitive proof that Obama’s frequently professed bromance with Israel is over.  You see, during his 60 Minutes interview, Obama put his opinion about that country front and center: Israel, he said, is “one of our closest allies in the region.”  Oooh, the pain!  The pain when the love goes away.  Those words are a slap in the face.

Let’s begin by ignoring the factual disconnect in what Obama said because, honestly, right now, I’m not sure that America is feeling the love from Egypt, Iran, Iraq, Syria, Lebanon, Saudi Arabia, etc., etc., etc.  Who cares if I feel the love?  Hasn’t Obama just said that he thinks of Israel as one of a number of closest allies.  Shouldn’t that be good enough for those who support Israel?  I mean, how often does a nation get to be called a “closest ally”?  Not too often, frankly, and it’s not a good thing when Obama does describe a nation in those terms.

The historical record, including Obama’s own record towards Israel, proves that being called a “closest ally” is being damned with faint praise.  It’s not a profession of love; it’s a slap in the face, a kick in the teeth, a cold shoulder.  I’ve got the evidence:

I hope you caught that. Every Tom, Dick, and Harry little country around the globe gets praise from Obama that reveals how tepid his recent praise for Israel was.  I mean, did he tell Steve Croft that Israel punches above its weight? No! At this moment in time, Israel impresses Obama less than Denmark, Norway, the Netherlands, Ireland, and the Philippines.

But wait!  It gets worse. Of other countries, Australia, France, Germany, the Netherlands, Poland, Great Britain Obama says “we have no stronger ally.” Heck, back in the day, before the Arab Spring, Obama even said that Israel is “one of our strongest allies.”

Think about that. All those countries — including, once upon a time, Israel — were stronger than each other.  Indeed, many of them were simultaneous even the strongest of them all, proving that there’s always room at the top, even for unique superlatives.

Oh, how the mighty have crumbled.  Israel is no longer a “strongest” ally, or even a “stronger” ally.  She’s just one of many “close” allies in a region notoriously hostile to America.  I mean, even a confirmed optimistic has got to admit that it’s not love when the mobs storm your embassy, take down your flag, and put up Al Qaeda’s flag, all while the Egyptian President takes his own sweet time to step in and end the rioting. 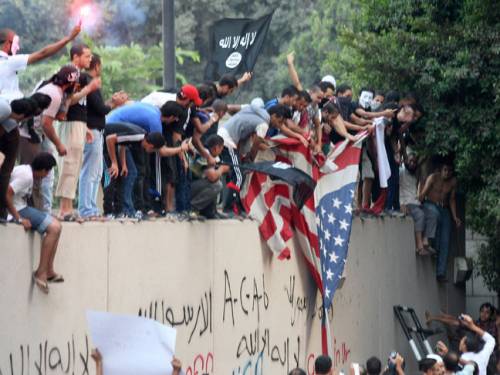 Face it folks. As Obama said, words matter.   And with his recent words, downgrading Israel from a strongest ally to a generic member of the anti-American pack, Obama has made it very clear that, if he’s reelected, Israel no longer has a friend in the White House.