The more I have a chance to digest today’s news stories, the more I am struck by how unbelievably tragic the deaths of four Americans in Benghazi seem today, even more so than they did on September 11.  On that day, smart people suspected that al Qaeda had struck again.  To the extent four men died, we pointed to the enemy and said, “They’re evil.  They killed Americans based upon a politico-religious ideal that loathes individual freedom, capitalism, women, Jews, homosexuals, and Christians.”  I felt ugly chills run up and down my spine when I saw the picture of those desperate, bloody fingerprints smeared on the wall, but I still knew who the enemy was, and it wasn’t us.

Today, though, I’ve learned that we have met the enemy and it is us — or, at least, some among us.  Nobody had to die in Benghazi.  For seven hours, Woods and Doherty called for help, but no help came.  Help was in reach.  The administration was watching events on satellite, Woods and Doherty were calling in details, and there were nearby support forces.  But the administration sat tight and let those men die, while Obama slept before heading off to Vegas for cash.

The heartbreak of all of this is that four dynamic lives were snuffed out so senselessly.  The horror is that they died because our government decided that going in would be bad for the elections and, therefore, that it was better to cover up the truth than to save American lives. 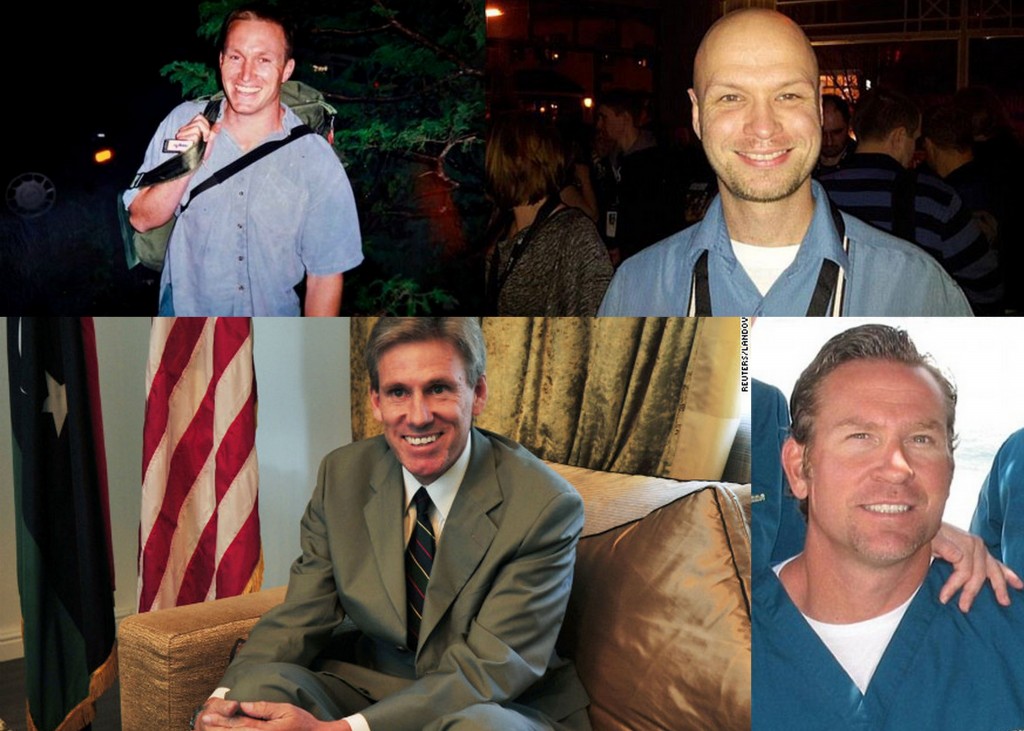 Because the media has given up it’s job as an independent fact-finder on behalf of the American people, the administration might have gotten away with this cover-up if it hadn’t done two stupid things:  (1) blame the intelligence community for the administration’s despicable decision-making and (2) tried to set Bill Clinton up as a scapegoat for Obama’s probable election loss.  Attacking the intelligence community resulted in today’s leaked story (which Wolf Howling analyzes with incredible care), while targeting Bill prompted leaks from the Clinton camp holding that Obama had previously nixed additional security in Libya.

Bruce Kesler, a veteran of the Vietnam War (which was another combat situation that saw Democrats abandon innocents to their death), says that this latest episode should be proof-positive that Democrats cannot defend America:

The cumulative evidence is now evident to all with even bad eyesight that Benghazi is sad proof of what conservative critics have been saying for the past four years, that President Obama, his appointees and administration lack the dedication, insight and guts to defend the United States honorably or resolutely.

Democrats were known as the Party of national security weakness for a generation after their betrayal of South Vietnam and Jimmy Carter’s callowness in the face of the Iranian radicals. Aging memories, war tiredness, and big lies from the Obama administration managed to recover some national security credibility.

Maybe because I’m one of those excitable, hormonal women CNN wrote about (and then ran away from), I would go further than Bruce did in indicting both the Democrats and the administration for being weak on national security.  If today’s report is to be believed, the administration was not just guilty of mismanagement.

What happened in Benghazi was an act of war against the American people — but not just an al Qaeda act of war, as the administration, quite belatedly, would have us believe.  It was also an Obama act of war.  In other words, Obama was speaking from the heart when he made his little slip during the third debate and said “this nation, me.”  To Obama, the nation is not Americans, their hopes, dreams, economic interests, and security.  To Obama, the nation is — Obama.  And when the American people get in the way of the Obama Nation-State, the American people have to go.  What Obama did was an abandonment of his Constitutional responsibilities as Commander-in-Chief and as our nation’s chief executive.  Our president has become the American Fifth Column.

UPDATE:  Both Blackfive and General David Petraeus make clear that the orders on this one came from the top.  (HT:  Ace of Spades)