When I was young, I was an atheist, in that I didn’t believe in anything at all.  As I’ve grown older, however, I find that I cannot sustain a belief in nothing.  Interestingly, my belief that there is some intelligent or design force out there that is infinitely greater than we are marches hand-in-hand with my belief in evolution and the Big Bang theory.  I don’t doubt the verity of those two theories.  I do believe, however, that they do not end the discussion of our and the Earth’s origins.  Instead, they just begin it. 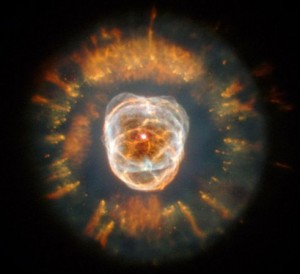 The real sticking point for me is the Big Bang.  Perhaps it’s because I have a simple mind, but I cannot believe that everything came from nothing.  My understanding of the world tells me that there must have been something before the Big Bang.  When I say this to people who are committed to science in lieu of (instead of in addition to) religion, they tell me that “There was probably another universe that collapsed and then, when it compressed itself completely into impossible density, it exploded in the Big Bang.”

Okay.  Fine.  I’ll buy that collapsed universe, unsustainable density, big explosion theory you’re selling.  But tell me this:  where did the prior universe come from?  It seems to me that we can play this “universe to Big Bang to universe to Big Bang” game forever, but that playing the game still doesn’t answer the question about where it all began.

For me, the “where it all began” leads to a something that must be infinitely greater and bigger than all the universes put together, or a single universe that keeps collapsing and being reborn.  And of course, once you start answering the origin question by positing “an intelligent being,” suddenly you’re a theist.  And once you’re a theist you automatically start trying to define for yourself your vision of this divine being.

I certainly don’t believe that there is a divine being who monitors our every move and controls our destiny right down to the last blink and handshake.  Indeed, I’ve never even been able to believe in the anthropogenic God whom Michelangelo painted in the Sistine Chapel or whom William Blake imagined: 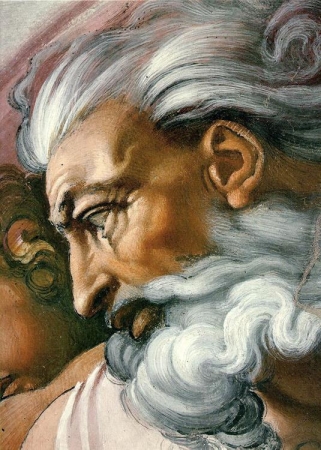 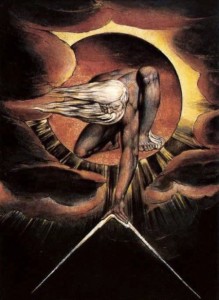 Nor have I been able to believe in the invisible God whose voice spoke to Abraham, Moses, and others in the Bible:

What do I believe then?  Well, I don’t actually envision a God.  Instead, I see his/its/her acts.  They are creative acts:  the universe, the template (although not the final plan) for all life, and the breath or divine spark that animates us and makes us greater than the water and chemicals that can be distilled from our bodies. 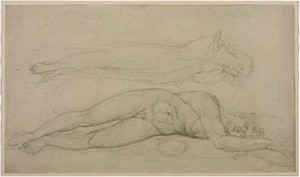 I am absolutely certain that each of us is truly greater than the sum of his (or her) chemical parts.  I knew this when my Dad died and his essence vanished, leaving only his body behind.  I couldn’t then and can’t now accept that the intangibles that made up Daddy vanished into nothingness.  To the extent that they were intangible — his wit, his intelligence, his charm, his temper — I felt then, and believe now, that they morphed into a different type of “intangibleness” (for want of a better word).  Things don’t vanish.  They decay or change.  The body decays; the spirit changes.

My Divinity, to the extent I assign attributes to this Divinity, is the clockmaker so many thinkers envisioned during the Enlightenment.  My Divinity got things started, inserted free will (including the freedom to engage in good acts or bad) and then stepped away.  Maybe we are an experiment, or a play thing, or an art work, or part of a much greater purpose that we are incapable of seeing or understanding.  Our inability to comprehend the purpose behind our existence doesn’t negate that purpose.  And to the extent that I am vaguely able to glimpse something greater than myself, I have elevated myself above the cow in the field or even my sweet dog sleeping comfortably on her bed as I type.  These animals exist, but I, imbued with that Divine spark, think.

As is so often the case with my long ruminations, I’m leading up to a take-down of a rather primitive atheist article I found in the New York Times.  The writer, Susan Jacoby, dismisses a God that micromanages life on earth and, even worse, a God that allows evil.  From that dismissal, Jacoby automatically assumes that only the opposite can be true — namely, that there is no God.

This line of thought, which is too simplistic even to be a proper syllogism, is silly.  As I’ve stated above, it is perfectly possible to believe that we exist for a reason — and that good and evil are an integral part of that existence — and, further, to believe that a Being greater than ourselves started our existence.

Jacoby next contends that her limited, binary view, provides comfort to the bereaved.  You see, in the face of evil, any evil, Believers can only conclude that God has abandoned or punished them, both of which are deeply depressing thoughts.  However, if one shakes off the shackles of faith, one can just believe that Bad Things Happen — although why random evil is supposed to be comforting, I don’t really understand.  Here’s Jacoby’s ultimate point, in her own words:

It is a positive blessing, not a negation of belief, to be free of what is known as the theodicy problem. Human “free will” is Western monotheism’s answer to the question of why God does not use his power to prevent the slaughter of innocents, and many people throughout history (some murdered as heretics) have not been able to let God off the hook in that fashion.

The atheist is free to concentrate on the fate of this world — whether that means visiting a friend in a hospital or advocating for tougher gun control laws — without trying to square things with an unseen overlord in the next. Atheists do not want to deny religious believers the comfort of their faith. We do want our fellow citizens to respect our deeply held conviction that the absence of an afterlife lends a greater, not a lesser, moral importance to our actions on earth.

Today’s secularists must do more than mount defensive campaigns proclaiming that we can be “good without God.” Atheists must stand up instead of calling themselves freethinkers, agnostics, secular humanists or “spiritual, but not religious.” The last phrase, translated from the psychobabble, can mean just about anything — that the speaker is an atheist who fears social disapproval or a fence-sitter who wants the theoretical benefits of faith, including hope of eternal life, without the obligations of actually practicing a religion. Atheists may also be secular humanists and freethinkers — I answer to all three — but avoidance of identification with atheism confines us to a closet that encourages us to fade or be pushed into the background when tragedy strikes.

We must speak up as atheists in order to take responsibility for whatever it is humans are responsible for — including violence in our streets and schools. We need to demonstrate that atheism is rooted in empathy as well as intellect. And although atheism is not a religion, we need community-based outreach programs so that our activists will be as recognizable to their neighbors as the clergy.

As I understand it, Jacoby’s thesis is, essentially, that atheists must band together to deny God and then to go on to the streets to fight crime.  I can just see their superhero now:

I applaud anyone who wants to make the world a better place, no matter what motivates them.  I do, however, reserve greater applause for those who do so through conservative principles such as individual responsibility, the free market, and traditional morality, since I think they’ll be more effective in achieving their goals.  I also fear those navel-gazers who, abandoning traditional religious principles, start thinking that the world would be a better place if we got rid of Jews or Blacks or Asians or anyone interfering with the navel-gazer’s world view.

What I don’t applaud is someone whose thinking is so blinkered that she cannot envision the possibility that a Divine Creator, in addition to giving us life (or at least getting the ball rolling on life), also endowed us with free will. I’ll admit that free will doesn’t automatically mean there is a God.  Contrary to Jacoby’s limited worldview, though, free will’s existence doesn’t automatically negate a divine being’s existence.

I guess my bottom line is that I’m always suspicious when people engage in this type of simplistic binary thinking. My feeling is that, if they’re that crude and unsophisticated about big issues, it’s very likely that their thinking about the smaller ones that affect our daily lives will be equally limited and defective.