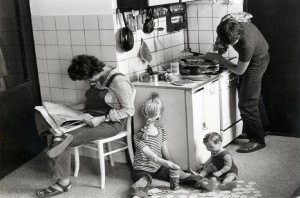 Dad works hard at a job that pays reasonably well and Mom runs the house.  She’s an okay manager, but somewhat careless.  On Dad’s salary, which includes a 4% raise every year, she provides all the basics, such as feeding, clothing, and educating their two children.  Every year, without fail, the family heads to Disneyland, and has some great memories and a nice photo album to show for these annual jaunts.  But she’s also a bit careless.  She periodically pays the mortgage and credit card bills late, incurring penalties and interest.  She leaves unnecessary lights burning whenever she leaves the room.  She’s an excellent cook, but she occasionally buys some expensive food and then forgets to use it, so she has to throw it out when it spoils.  She’s an impulse shopper, so her closet has clothes that she wore once and then never again.  She always forgets to put money in the meter, so she has a backlog of parking tickets.  That kind of thing.  None of them are a big deal, but taken together, they definitely drain away a small, but solid percent of the family’s money.

One day, Dad comes home and says, “Mom, the boss told me that, because of the recession, instead of getting my 4% annual raise, I’ll only get a 3% annual raise.  We’ll still be bringing in more money than last year, but not quite as much more as we had expected.  We may have to retrench a little.”

Mom is livid.  “How dare your boss do that!  You’ve been a great employee.  Well, if we have to retrench, I’ll show him!  And I’ll make you suffer too for working for such a cheapskate.”

Here’s what Mom does:  she tells the kids they’re never going to Disneyland again; she starts serving only Mac ‘n Cheese from a box; she only buys the family clothes from goodwill; and she constantly tells them that it’s not her fault that their lives have become so miserable.  She’s just responding to Dad and his mean boss.

Keep that parable in mind the next time you don’t get to see the Blue Angels fly, or you don’t get a tour of the White House.  And keep it in mind as the government continues to spend money on studies about condom use and monkey poop and whatever else stupid thing it keeps funding with your dollars.

And that ends today’s lesson….