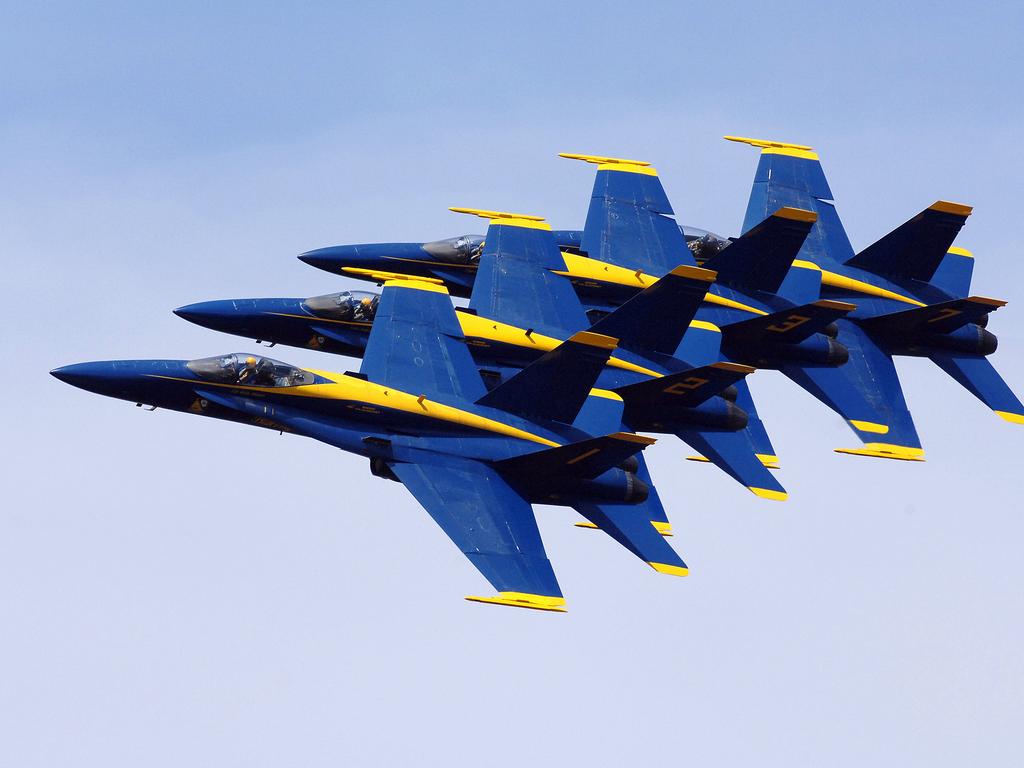 (I wrote this for Mr. Conservative, but it’s pure Bookworm in word and thought, so I’m republishing it here.  Frankly, I’m spitting mad, because regular readers know exactly how much I love Fleet Week.)

The official announcement is effective immediately, cancelling all performances currently scheduled between now and December. The squadron will continue to train, but the shows are over for the time being:

The Navy has cancelled the remaining 2013 performances of its Flight Demonstration Squadron, the Blue Angels. The Squadron will continue to train to maintain flying proficiency until further notice at its home station in Pensacola. Recognizing budget realities, current Defense policy states that outreach events can only be supported with local assets at no cost to the government.

Perhaps it’s reasonable to ground the Blues; but more likely it’s not. After all, as Sen. Coburn revealed in a recent study about wasteful spending in the military, the military spends a lot of money on touchy-feely or green programs that have nothing to do with military preparedness or with connecting ordinary Americans to their military, and that have everything to do with PC pandering to Beltway Progressive sensibilities. These programs include duplicative research programs, ineffective bomb detectors made by families with nepotistic ties to agency brass, creating coffee break apps, teaching grill safety, etc. Indeed, the military is still contemplating abandoning $36 billion worth of military hardware in Afghanistan.

This type of administrative waste (with has nothing to do with the quality of the men and women who serve), puts the military right in line with a federal government that uses taxpayer dollars to fund studies about alcoholic lesbians, makes it impossible to fire bad workers, and generally wastes your money.

What’s most like is that the point of the Blues’ grounding is to ignore the waste in favor of making the taxpayers suffer. How else can the government force people to stop their relentless (and reasonable) demand that the government act responsibly with other people’s money? The Pentagon – which is under Obama administration control – is letting the people know that any cuts to the government won’t improve efficiency, but will simply make taxpayers miserable. Cancelling the Blue Angels show is a special kind of misery, because it not only disappoints the Blues’ legion of fans, it also causes real economic hurt to the cities that host the show. Shows routinely draw in cities hundreds of thousands of fans who spend real money – in hotels, in restaurants, and in stores.

And just to keep things in perspective, keep in mind that tonight the White House is hosting yet another exclusive party. According to the White House schedule, Michelle and Obama are hosting a concert “celebrating Memphis Soul.” The President will speak. The guests include performers who are not known for Memphis Soul, such as Justin Timberlake, Cyndi Lauper, and Queen Latifah, not to mention Al Green, Ben Harper, Sam Moore, and others. The White House refuses to release details that will help calculate what this little party will cost the taxpayers. One thing is for sure – the money spent will not confer any benefit on the communities that will be harmed when the Blue Angels stop flying.