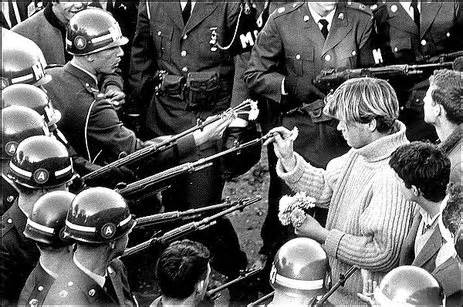 The photo above must be one of the most iconic images from the hippie, anti-war period.  A youthful anti-Vietnam War protester, faced with a ring of National Guard troops pointing their rifles at him, carefully places a flower in each muzzle.  He thinks, no doubt, that the flowers have magically converted the guns into harmless instruments.  The troops, however, know that their rifles are still rifles.  The only thing that’s preventing them from firing is their inherent decency and, of course, the lack of any order telling them to pull the trigger.  The flower didn’t change anything; it’s the underlying morality that matters.

I thought of this liberal delusion — that guns can magically be transformed into harmless flowers — when Hube brought to my attention the clarity with which Benjamin Netanyahu spoke about the existential threat facing Israel, and about the West’s passivity in the face of this threat:

“The leaders of the Allies knew about the Holocaust in real time,” Netanyahu said at the opening of a permanent exhibit called “Shoah” in Block 27 at the Auschwitz- Birkenau State Museum.

“They understood exactly what was happening in the death camps. They were asked to act, they could have acted, and they did not.

“To us Jews the lesson is clear: We must not be complacent in the face of threats of annihilation. We must not bury our heads in the sand or allow others to do the work for us. We will never be helpless again.”

To stare down the muzzle of a rifle is a remarkably clarifying moment.  Why aren’t we having such clarifying moments in America despite the Islamists’ relentless war against America and Western values?  I think the problem is perfectly summed up by the young man in that photo:  reality-challenged Progressive think that, by pretending the rifle is a flower, it will magically become one.  That’s not how rifles or flowers work.