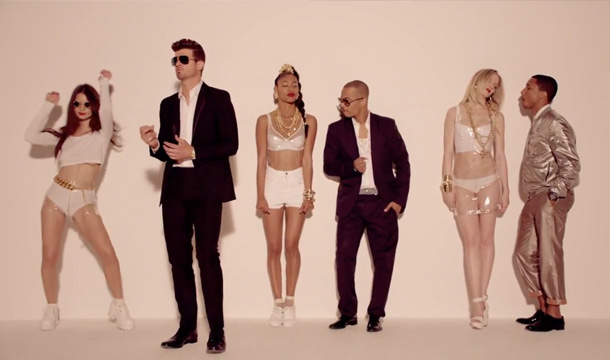 It’s time for me to take a break from trying to save the world by using my infinitesimally small corner of the blogosphere to talk some sense into the Left (although, somehow, I don’t think they’re listening to me) and, instead, to leap to the defense of an unlikely pop culture figure:  Robin Thicke.  My thesis is that his song is not about rape.  It is, instead, both the lineal descendent of classic (and respected) American seduction songs and a depressingly insightful look into the schizophrenic nature of sex among American young people, a brave new world that treats women as whores, but allows them to cry foul like delicate Victorian maidens.

One could say that Robin Thicke, riding high on the wave of one of the biggest hits of the year, a song called “Blurred Lines,” doesn’t need my help.  He’s raking money in hand over fist.  If I earn in my lifetime a tenth of what he’s earning on this song, I’d be a very rich woman.

Nevertheless, Thicke has incurred feminist ire because, the feminists claim, Blurred Lines is about rape or, at least, it’s “rapey”:

Having already clinched the number 1 spot on Billboard’s Hot 100, Robin Thicke’s catchy single “Blurred Lines” is on the path to being the party anthem of the summer.

However, despite its popularity, the hit song — which also features Pharrell and T.I. — and its accompanying music video haven’t been sitting too well with some critics who say the tune is not just disparaging to women, but could be seen as “rape-y.”

“Has anyone heard Robin Thicke’s new rape song?” blogger Lisa Huyne wrote in a post in April. “Basically, the majority of the song…has the R&B singer murmuring ‘I know you want it’ over and over into a girl’s ear. Call me a cynic, but that phrase does not exactly encompass the notion of consent in sexual activity … Seriously, this song is disgusting — though admittedly very catchy.”

Before I get any further into examining the claim, let me note that the people who are claiming the song is “rapey” overlap to a significant degree with the women who advocate something called “gray rape.”  Gray rape is consensual sex right up until the woman says it isn’t.  The catch with gray rape is that the woman doesn’t have to say “no” before or even during the actual sex act for it to be rape.  She can decide hours or days later that, despite her drunken “yeses” and gropings, in retrospect she really didn’t want to have sex with that guy, so it must have been rape.  Talk about “blurred lines.”

Both because you’re a classy crowd, my dear readers, and because I suspect many of you don’t have children in their teens and twenties, I’m willing to bet that many of you, even if you’ve heard of Thicke’s song, haven’t actually heard the song itself or, if you heard it, it was in the context of Miley Cyrus’ twerking and tonguing.  (I have to admit that the twerking was indistinguishable to me from the vulgar dancing that characterizes all modern popular music performances.  It was that tongue . . . that loathsome, snake-like tongue, that seemed to have an independent life force.  Ick.)

You might also have heard about the song because of the unrated video with the topless women (and don’t forget the repeated boasts about the size of Thicke’s  . . . er.  Never mind).  Or maybe you just heard about the yucky allusions to all sorts of perverted sexual practices in the mainstream video (the one your kids and grand-kids watch), which is filled with nudge, nudge, wink, winks about everything from bestiality to bondage.  Both videos are nasty enough I don’t want them at my blog.

But I don’t want to talk about the videos.  I want to talk about the song’s lyrics, which are now called “rapey.”  Just to be clear, truly “rapey” things are bad.   Drugging and sodomizing a protesting 13-year-old girl, as Roman Polanksi did, isn’t bad because it’s not “rape-rape.”  It’s bad because it’s actual “rape.” Presumably, if Polanksi had sung to the protesting teen while he had his wicked way with her, that song would also have been “rapey” and therefore bad.  It”s important to keep these details straight….

My first point about Thicke’s song is that it’s just the latest in a long line of American seduction songs.  Let’s do a little time travel . . . back to 1949 when Frank Loesser wrote the classic Baby, It’s Cold Outside.  It is such a great song.  My favorite version is the one with Johnny Mercer and Margaret Whiting, and I have no fear about sharing it with you here:

Were this song to be released today, it would definitely be called “rapey.” I mean, the sleaze is telling the protesting woman how attractive she is and assuring her that she wants want he has to offer. You can see how coercive — e.g., rapey — he’s being when you study the lyrics. In the words that are not in parenthesis, you know that she’s conflicted (blurred, maybe?) and desperate to escape, while in the parenthetical words, you can see how this sleazy octopus groping her, assuming that she wants what he’s offering her, and not taking “no” for an answer. Rapey!!!

My mother will start to worry
(Beautiful words you’re humming)
And father will be pacing the floor
(Listen to the fireplace roar)
So really I’d better scurry
(Beautiful, please don’t hurry)
Well, maybe just a half a drink more
(Put some records on while I pour)

The neighbors might think
(But, baby, it’s bad out there)
Say, what’s in this drink?
(No cabs to be had out there)
I wish I knew how
(Your eyes are like starlight now)
To break the spell
(I’ll take your hat, your hair looks swell)

I ought to say no, no, no sir
(Mind if I move in closer?)
At least I’m gonna say that I tried
(What’s the sense of hurtin’ my pride?)
I really can’t stay
(Oh, baby, don’t hold out)
Ah but it’s cold outside
(Baby, it’s cold outside)

I got to get home
(But, baby, you’d freeze out there)
Say, lend me a coat
(Its up to your knees out there)
You’ve really been grand
(I’m thrilled when you touch my hand)
Why don’t you see
(How can you do this thing to me?)

Okay, I don’t think it’s rapey at all. I think it’s romantic. He is, in the old vocabulary, “pitching woo.” She’s making ritual protests, and he’s coming back with promises of comfort and love. There’s no force involved in the lyrics. He’s just trying to let her know that he’s offering her a better deal than that cold, cold outside.

With those classy, elegant, seductive lyrics in mind, please take a look at the lyrics to “Blurred Lines” and you’ll see that, while they’re more graphic, the tone is identical:  He’s telling her she’s hot, he’s assuming he knows what she wants, and he’s not taking “no” for an answer:

Robin Thicke Bridge:
Ok, now he was close
Tried to domesticate you
But you’re an animal
Baby, it’s in your nature
Just let me liberate you
You don’t need no papers
That man is not your maker
And that’s why I’m gon’ take a

Robin Thicke Verse 2:
What do they make dreams for
When you got them jeans on
What do we need steam for
You the hottest bitch in this place
I feel so lucky, you wanna hug me
What rhymes with hug me
Hey!

T.I. Verse 3:
Hustle Gang Homie
One thing I ask of you
Lemme be the one you back that ass up to
From Malibu to Paris boo
Had a bitch, but she ain’t bad as you
So, hit me up when you pass through
I’ll give you something big enough to tear your ass in two
Swag on ’em even when you dress casual
I mean, it’s almost unbearable
In a hundred years not dare would I
Pull a Pharcyde, let you pass me by
Nothin’ like your last guy, he too square for you
He don’t smack that ass and pull your hair like that
So I’m just watching and waitin’
For you to salute the true big pimpin’
Not many women can refuse this pimping
I’m a nice guy, but don’t get confused, this pimpin’

Robin Thicke Verse 4:
Baby, can you breathe
I got this from Jamaica
It always works for me
Dakota to Decatur
No more pretending
Cause now you’re winning
Here’s our beginning
I always wanted a

I’m not comparing the quality of verse.  Loesser’s song is sophisticated and charming, with delightfully light, intelligent lyrics.  Thicke’s song has a catchy (very catchy melody) but the lyrics are woefully crude.  They reflect the realities of culture that celebrates “Hooking up” as a sign of female liberation, even while blurring lines about what constitutes a “nice” girl, a “girl in touch with her sexuality,” a girl who enjoys what voters in Colorado and Washington say should be her inalienable right to pot, and a “girl who’s going to cry ‘gray rape'” the next day.  There are no boundaries in this world — both the world of the song and the sexual world in which we’ve placed our young people.

Yes, there’s that revolting line in the song that “I’ll give you something big enough to tear your ass in two,” but for America’s youth, this crudity is their daily, non-rape reality.  At high school dances across America, the only dance the kids do is “freak dancing.”  For those unfamiliar with it, freaking is kind of like twerking, except that the girl doesn’t bend over.  Instead, she writhes erotically while the guy stands behind her and rubs himself against her butt (not near her butt, but against her butt).  As I described it the teenage girls I know, take away the “transgressive glamor” and all that freaking means is that a strange guy masturbates against your butt.  As a girl, if you don’t want to freak, you don’t get to dance.  Yet another blurred line in today’s sexual culture.

.) Within that context, the song simply describes the myriad kinds of sexual activity in which America’s young people are encouraged to engage, with the only limitation being a woman’s right to cry rape at any time, before, during, and after apparently consensual intercourse.

I’m not trying in this post to excuse rape.  I am saying only that Thicke and his team, in addition to writing the 21st century version of a “seduction song,” have unwittingly exposed something deeply disturbing about young America’s sexual culture.  It’s a sick Faustian bargain in which boys get virtually unlimited sex, provided that they’re willing to take the risk that the girl who writhed against them Saturday night, got stoned and drunk with them around midnight, and apparently willingly engaged in all kinds of variations on old-fashioned male/female sex with them in the wee hours of Sunday morning, can claim later that, hey, she was just blurred, and her real line was “no.”