When I wrote the following post for Mr. Conservative (slightly modified for publication here), I hadn’t yet seen this Opt-Out video  They do make pretty much the same point.  First, the video:

And now my Mr. Conservative post, complete with pictures: 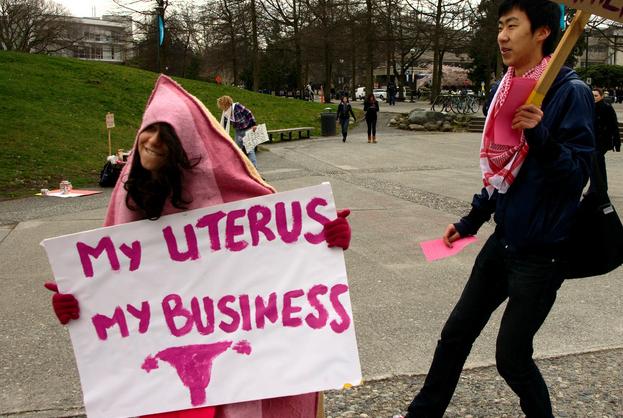 Progressives love to tote signs around to abortion rallies reading “U.S. Out Of My Uterus.” Apparently it’s time for conservatives to start waving around the same signs, although for a much better reason. One of the features (not a bug, but a feature) of Obama care is the fact that it uses financial pressure to force every doctor, from your podiatrist, to your dermatologist, to your cardiologist, to your gynecologist to ask you highly intrusive questions about your sex life.

ObamaCare demands that all medical providers must keep electronic health records. Doctors who do not get electronic record keeping systems in place by 2015 will be heavily penalized by both Medicare and Medicaid.

Because the electronic record systems are mandated by the government, the government has also set guidelines about what patient information must be contained within those records. It turns out that the details of your sexual history (“Are you having sex?” “With whom?” “With multiple partners?” “How often?”) are part of the required content. (The only thing physicians can’t ask is about whether you own guns. You can thank the NRA for that oasis of privacy.)

A New York cardiologist had harsh words for the system. He described it as “a nasty business,” and as “insensitive, stupid and very intrusive.” It also forces physicians to seek out information entirely unrelated to the care they’re providing. As McCaughey reported, cardiologists don’t need to know about your sex life.

Another doctor spelled out precisely what’s wrong with the demand, and it goes to the heart of the doctor-patient relationship:

Dr. Richard Amerling, a nephrologist and associate professor at Albert Einstein Medical College, explains that your medical record should be “a story created by you and your doctor solely for your treatment and benefit.” But the new requirements are turning it “into an interrogation, and the data will not be confidential.”

When he says “not confidential,” Amerling is right. First of all, if the government mandates it, you can bet your bottom dollar that at some point they’ll try to grab it. That, after all, is what Big Brother governments do. But more than that, all electronic records are vulnerable to hacking and to carelessness. You’d think that, between Bradley Manning and Edward Snowden, the government would have figured out that giant databases filled with sensitive information are inevitable targets.

So, people, it’s time to head next door to your Progressive neighbor to borrow her “Keep Your Laws Of My Body” sign. In a way that has never been true for abortion (where the aim of the pro-Lifers is to protect a woman’s uterus from intrusion), that sign finally has a real purpose. With ObamaCare, Big Brother government is seeking to burrow its way into every crevice and private place in your body.