First, I’m gonna hit you with the visuals.  Isn’t this a great Halloween poster, courtesy of Chris Muir? 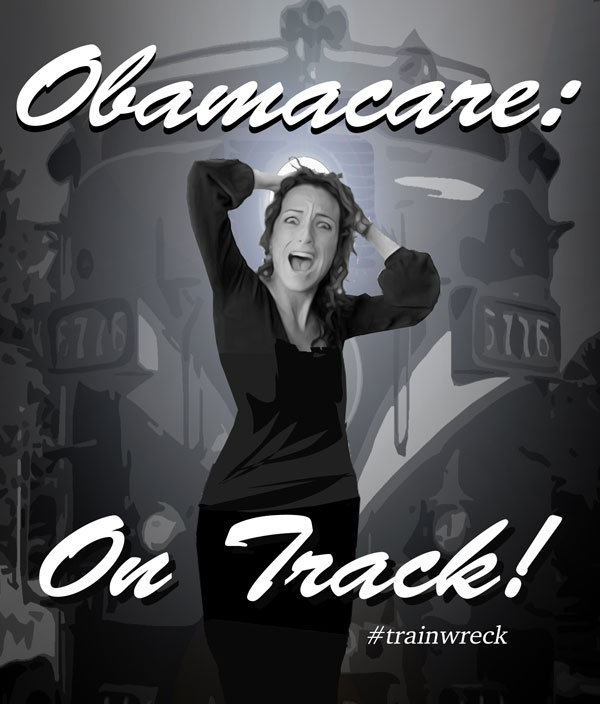 Rep. Renee Ellmers put Sebelius on the hot seat. Watch Sebelius twist and squirm like a worm on a hook as she avoids saying that people who don’t buy health insurance are violating the law and as she is forced to admit that men must buy maternity care, whether they need it or not:

Dennis Prager, one of whose many virtues is the fact that he is a temperate man who relies on logic rather than emotion to guide him, assembles a compelling body of facts to support his conclusion that, despite having disagreements with past presidents, “I have never written or broadcast that our country was being seriously damaged by a president. So it is with great sadness that I write that President Barack Obama has done and continues to do major damage to America.”

Charlie Martin does a fabulous (no exaggeration) job explaining how real insurance works and how Obamacare perverts and ultimately destroys real insurance.  I don’t think he says anything that you and I don’t already know and that we didn’t predict years ago, but I’m greatly impressed by how accessible he makes complex ideas.  If you have a tween or teen, or a liberal relative or friend who has never actually contemplated how the real world works, you could do a lot worse than forwarding Martin’s post to them.

One of the things that distinguishes the PBS crowd (both creators and audience) from other Americans is their smugness.  They are the self-styled intelligentsia.  Their neatly packaged two-to-fifteen minute segments tell you everything you need to know.  Unspoken in that last sentence is this part:  “everything you need to know in order to maintain your smug disdain for Americans who live in flyover country, or didn’t attend Ivy League colleges, or believe in God, the flag, and America, etc.”  Sometimes, to preserve this wonderful feeling of superiority, of course, you have to lie . . . just a little bit . . . or maybe a lot . . . but it’s a “truthy” lie because, even if the facts are kind of not really correct, you’re right about the overarching idea or theory.  This attitude probably explains why PBS did a report on Orson Welles’ War of the Worlds broadcast and repeated as truth the claim that ordinary Americans were so stupid that they succumbed to mass panic.  The so-called panic, in fact, was puffery from a media anxious to trumpet its importance.  I’m thinking that maybe PBS stands for “Pure Bulls**t.”

Sebelius has taken full responsibility for the Obamacare rollout debacle.  In a normal world, she’d be standing on a street corner now with a sign saying “Will work for food.”  In Obama-world, she will keep her job until she decides to leave.  When she does leave, she’ll get on the speaking circuit and make $30,000-$50,000 for a 45 minute speech touting what a wonderful job she did.  After all, it’s worked for Hillary and Holder, so why shouldn’t it work for Sebelius?  As she’s already made clear, she doesn’t work for the people who actually pay her salary (that would be you and me) but, instead, works for much more important people who also get their salary from us.  It’s easy to confess a sin when you know that you need not fear either punishment or repentance.

All the liberals are piling on Obama now.  The most recent is the WaPo’s Dana Milbank.  I’m unimpressed.  All of these things about Obama were obvious in 2007 and in every year thereafter.  Before about two minutes ago, the same people now criticizing him were either lying through their teeth when they praised him and his plans, or they were pathologically dumb to the point of complete mental retardation.  So now, when the damage is done, suddenly they’ve discovered that Obama has managed to be simultaneously corrupt and ineffectual.  Who cares.  What I want, and what none will do, is to see these people issue the groveling apologies that the American people deserve, and to promise to bring a swift, impeachment-style conclusion to the most corrupt presidency ever.