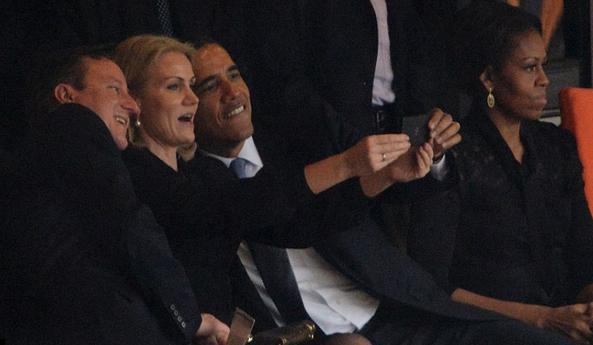 Everyone’s been having fun with the Mandela funeral fiasco, whether they’ve been talking about selfies or sign language.  It was an event made for Mark Steyn’s writing:

[H]ow heartening, as one watches the viral video of Obama droning on while a mere foot and a half away Mr. Jantjie rubs his belly and tickles his ear, to think that the White House’s usual money-no-object security operation went to the trouble of flying in Air Force One, plus the “decoy” Air Force One, plus support aircraft, plus the 120-vehicle motorcade or whatever it’s up to by now, plus a bazillion Secret Service agents with reflector shades and telephone wire dangling from their ears, to shepherd POTUS into the secured venue and then stand him onstage next to an $85-a-day violent schizophrenic. In the movie version—In the Sign of Fire—grizzled maverick Clint Eastwood will be the only guy to figure it out at the last minute and hurl himself at John Malkovich, as they roll into the orchestra pit with Malkovich furiously signing “Ow!” and “Eek!” But in real life I expect they’ll just double the motorcade to 240 vehicles and order up even more expensive reflector shades.

Speaking of enjoying themselves, back in the VIP seats President Obama, Danish prime minister Helle Thorning-Schmidt, and British prime minister David Cameron carried on like Harry, Hermione, and Ron snogging in the back row during the Hogwarts Quidditch Cup presentation. As the three leaders demonstrated their hands-on approach, Michelle Obama glowered straight ahead, as stony and merciless as the 15-foot statue of apartheid architect Dr. Hendrik Verwoerd that once stood guard outside the government offices of the Orange Free State. Eventually, weary of the trilateral smooching, the first lady switched seats and inserted herself between Barack and the vivacious Helle. How poignant that, on a day to celebrate the post-racial South Africa, the handsome young black man should have to be forcibly segregated from the cool Aryan blonde. For all the progress, as Obama himself pointed out, “our work is not yet done.”

Give yourself a Saturday treat and be sure to read the whole thing.