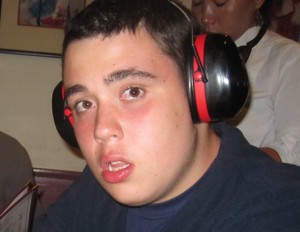 . It is a very important book, since it turns on its head all of the conventional wisdom about non-verbal autism.  Because of his book, Ido has rightly become a big deal amongst people affected by autism, a group that includes autistic people, their families, and their teachers.

Ido’s increasingly high profile caught the eye of a L.A. Times reporter who spent several months interviewing Ido, his family, and those who have worked with and gotten to know him.  The result is a glowing profile in the L.A. Times which really gives an insight into the overwhelming and often very beautiful world that Ido inhabits:

Autism, Ido says, is like being on LSD, something he learned about in health class, and his experience in the world can be at times terrifying and overwhelming. Sensory minutiae that in other people are filtered and organized, collide indiscriminately in his brain. Feelings of anger, sadness, even silliness can escalate, and he can have difficulty calming down.

The water surges around them. The sound of the waves and sea gulls, the voices and screams of children and families, the surf, rising and falling, its ceaseless crescendo and diminuendo, rushes at Ido as a terrible cacophony like the buzzing of mosquitoes, loud and inescapable.

As unsettling and as unpredictable as autism is, it also brings a strange pleasure to Ido’s life. Glints of sunshine, pockets of shade mesmerize him, and objects in motion reveal traces of acceleration, like stop-motion photography.

He grabs a strand of kelp, strips off the leaves and begins whipping it over and over in an S-pattern against the dissolving foam. Waves rise and fall against him, but he stays focused on the movement that he’s created against the water’s surface.

Like many of his repetitive behaviors — arm-flapping, finger-dancing, string-twirling — this gesture, referred to in the autistic community as a “stim” (for self-stimulation), enhances sensations around him and has a narcotic effect.

They take me to a sensory experience that is pretty intoxicating. I don’t get lightheaded, but I can get so absorbed in a stim I sort of vanish from my personhood.

Please read the whole thing.  I think you’ll be amazed.