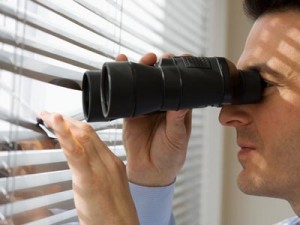 People are asking why, with a potentially successful midterm election coming, the GOP has decided to go forward with amnesty, even though (a) only 3% of Americans care about the issue and (b) the base is strongly opposed to the GOP’s plan.  On its face, this seems like an insane thing to do, since it can destroy the Republican party in two ways, first, by denying it success in the 2014 midterm and, second, by creating a permanent Democrat constituency.

I think that Glenn Reynolds might inadvertently have provided the answer by juxtaposing two posts:

(Links to the two posts referenced are here and here.)

Has the GOP House leadership been threatened into sabotaging the 2014 midterms?  To answer that, consider that the NSA trolls indiscriminately for all cell phone and internet content.  The sheer volume of information means that it’s unlikely that the NSA can review it in real-time so as to prevent an imminent attack.  The best way to use that information is to pick a target and then, having isolated the target, to go back into the saved data and to fined content that damages the target.

Once the NSA has completed its targeting data troll, GOP politicians who have had affairs, used drugs, engaged in illegal transactions, etc., might find themselves facing a government official who says something along the lines of “Nice life ya’ got here.  Shame if something happened to it.  Kinda like the something that happened to Dinesh d’Souza, if you know what I mean.”

Yes, I know that sounds like paranoid wacko stuff.  But consider that just five years ago, we would have dismissed as paranoid wacko stuff all of the following:  IRS persecution of conservative political organizations; NSA spying indiscriminately on email and cell phone, as well as on the House of Representatives and media members; the Department of Justice engaged in gun-running; video makers getting imprisoned as Free Speech martyrs to hide an administration’s failure to prevent a terrorist attack; nuns being forced to pay for birth control and abortifacient pills; deals with Iran that effectively allow it to become a nuclear nation; and a president who uses executive orders, not to effectuate executive duties, but instead to nullify existing law or to create non-existent law out of whole cloth.

Given an administration that views the Constitution as a hindrance, why shouldn’t we believe that it’s engaging in the tried and true communist tactic of spying on opponents, getting dirt on them, and then using that dirt to force them to act against their interests?