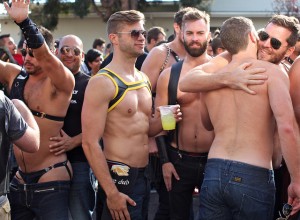 Growing up in San Francisco during the 1960s, I have very fragmented memories of an older time, when women still wore gloves, and both men and women wore hats.  Most of my solid, coherent memories start kicking in with San Francisco’s Summer of Love, which very quickly turned into its winter of degradation.  During those formative years (from about ages 6 though 16), it was common for me to see people tripping on sidewalks, lying in filth, and vomiting all over themselves.  I was also routinely assaulted and insulted by the smell emanating from these Flower Children.  Ick.

By the mid-1970s, hippies were passé in San Francisco.  The new “in thing” was the gay scene.  The libertarian part of me thought it was a wonderful thing that men and women (but mostly men) could love freely, without being afraid that they would be humiliated, beaten, ostracized, or imprisoned.  Even as the gay lifestyle flowered in San Francisco, we heard stories about gays being imprisoned in Soviet Russia for no other crime than the fact that they were gay.

When I tried to explain to people my sense of repugnance about the gay lifestyle, what I always fell back on was the fact that this type of hedonism couldn’t be good — not for society and not for the individual.  In addition, I was offended by the lack of intimacy.  Getting naked with a stranger and having drug-fueled sex is not intimacy.  Getting to know someone, loving them, sharing the highs and lows of life together, understanding what makes them tick, wishing them well — those are the ingredients for intimacy.  The gay lifestyle I saw around me was aggressively opposed to those “mundane” relationship attributes.

Growing up and working in San Francisco, I was able to see that, to too many gays, their choices have always been, first and foremost, about sex.  Without exception, every person I knew from high school who came out of the closet instantly embraced a package deal.  It wasn’t just that they selected their partners from their own sex.  It was that they suddenly only went to gay movies, had gay porn magazines in their household, hung out only with gays, and voted gay . . . which meant an increasingly hard Left political agenda.  They were no longer “Larry, a teacher and father who happens to have a male partner.”  Instead, “they were a gay man named Larry who happens to teach on the side and is proud to raise his kid in a same-sex parent home.”

This obsessive focus on sex left little room for anything else.  As the 70s and 80s demonstrated (and as is becoming true again today for a young generation of gay men), brief, intense, drug-heightened sexual encounters were like meth for the brain.  Why have a stable, loving relationship with anyone when you could go to the bathhouse, or just walk down the street, and be a sexual endorphin junkie getting hit after hit?  Even those men I knew who were in stable relationships with long-term partners weren’t monogamous.  Instead, their relationships were still about having sex with as many men as possible — provided that they shared dinner with the same man every evening.

All of the above is an introduction to a most amazing post from a couple of years ago, written by the proprietor of a humor blog called “The Weed.”  (H/T:  Earl.)  Its proprietor, Josh Weed, came out of the closet at this site, but in a most unusual way:  he is a gay man, happily married to a woman and, most unusually for one of these “out of the closet” confessions, he plans to stay that way.  The reason he is able to recognize his sexual attraction to men, while maintaining a stable, loving — and, yes, sexual — relationship with his wife is because of his priorities:

The truth is, what people are really asking with the above question is “how can you be gay if your primary sex partner is a girl?” I didn’t fully understand the answer to this question until I was doing research on sexuality in grad school even though I had been happily married for almost five years at that point. I knew that I was gay, and I also knew that sex with my wife was enjoyable. But I didn’t understand how that was happening. Here is the basic reality that I actually think many people could use a lesson in: sex is about more than just visual attraction and lust and it is about more than just passion and infatuation. I won’t get into the boring details of the research here, but basically when sex is done right, at its deepest level it is about intimacy. It is about one human being connecting with another human being they love. It is a beautiful physical manifestation of two people being connected in a truly vulnerable, intimate manner because they love each other profoundly. It is bodies connecting and souls connecting. It is beautiful and rich and fulfilling and spiritual and amazing. Many people never get to this point in their sex lives because it requires incredible communication, trust, vulnerability, and connection. And Lolly and I have had that from day one, mostly because we weren’t distracted by the powerful chemicals of infatuation and obsession that usually bring a couple together (which dwindle dramatically after the first few years of marriage anyway). So, in a weird way, the circumstances of our marriage allowed us to build a sexual relationship that is based on everything partners should want in their sex-life: intimacy, communication, genuine love and affection. This has resulted in us having a better sex life than most people I personally know. Most of whom are straight. Go fig.

Josh also realized something really important, which is that nobody can ever have it all, something that’s especially true for gays:

One of the sad truths about being homosexual is that no matter what you decide for your future, you have to sacrifice something. It’s very sad, but it is true. I think this is true of life in general as well. If you decide to be a doctor, you give up any of the myriad of other things you could have chosen. But with homosexuality, the choices seem to be a little bit more mutually exclusive.  If you are Mormon and you choose to live your religion, you are sacrificing the ability to have a romantic relationship with a same-sex partner. If you choose a same-sex partner, you are sacrificing the ability to have a biological family with the one you love.  And so on. No matter what path you choose, if you are gay you are giving up something basic, and sometimes various things that are very basic. I chose not to “live the gay lifestyle,” as it were, because I found that what I would have to give up to do so wasn’t worth the sacrifice for me.

(You should really read the whole thing, which includes the way his Mormon parents accepted his sexuality while helping him focus on the things that matter in life.)

I am not suggesting that every gay person must replicate Josh’s decision to acknowledge his sexual attraction to men, but nevertheless commit to a relationship with a woman.  I’m simply suggesting that the gay milieu too often denies men and women the choice to have a traditional heterosexual relationship.  With its relentless emphasis on sexual identity and sex, the LGBTQ lobby puts enormous pressure on young men and women who self-identify as LGBTQ to abandon the notion of traditional intimacy in favor of a lifestyle focused solely on sexual preferences and, by extension, sexual pleasure.

Anyway, coming as I do from a background that left me with a deep distrust of hedonism, I was very impressed with Josh’s (and his wife Lolly’s) coming out post and think it is an interesting addition to the discussion about the LGBTQ community and the lifestyle choices its members make.  It’s especially interesting given that the 9th Circuit will soon be hearing arguments about the constitutionality of a California law that makes it impossible for religious people to help willing gays voluntarily transition away from the gay lifestyle.