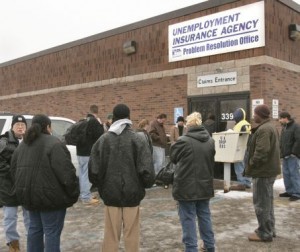 When the CBO announced that Obamacare was going to have a deleterious impact on jobs over the next few years (as in 2.5 million fewer people in the work force), those opposed to Obamacare not unnaturally glommed on to those numbers as proof that Obamacare is an economic disaster.  After a moment of stunned silence, however, Democrats came roaring back with celebratory paeans to the end of “job lock.” James Taranto helpfully rounded up some good examples, beginning with Paul Krugman:

In his New York Times column today, former Enron adviser Paul Krugman cheers the news that ObamaCare subsidies are expected to have a greater-than-expected disincentive effect on work:

On Wednesday, Douglas Elmendorf, the director of the nonpartisan Congressional Budget Office, said the obvious: losing your job and choosing to work less aren’t the same thing. If you lose your job, you suffer immense personal and financial hardship. If, on the other hand, you choose to work less and spend more time with your family, “we don’t sympathize. We say congratulations.”

And now you know everything you need to know about the latest falsehood in the ever-mendacious campaign against health reform.

Although it was charitable of Krugman to warn readers off the rest of his column, those who heeded his admonition not to read on missed his amusingly worded nod in the general direction of reality: “More subtly, the incentive to work will be somewhat reduced by health insurance subsidies that fall as your income rises.”

Krugman, of course, was not alone.  He was just the most obnoxious voice in the rising Leftist chorus chanting “Hallelujah!  Job lock is over!”  James Taranto again:

E.J. Dionne, Washington Post: “Oh my God, say opponents of the ACA, here is the government encouraging sloth! That’s true only if you wish to take away the choices the law gives that 64-year-old or to those moms and dads looking for more time to care for their children. Many on the right love family values until they are taken seriously enough to involve giving parents/workers more control over their lives.”

Ron Fournier, National Journal: “The GOP has seized on CBO’s conclusion that the equivalent of more than 2 million Americans would use Obamacare subsidies to leave the workforce. No longer tied to jobs merely to cling to health insurance, some people will retire early, work part time, start a business, or spend more time with their families.”

Eric Boehlert, MediaMutters (on Twitter): “CBO: Obamacare will give workers more choices; some workers might chose [sic] to work less to spend more time w/ families….RW condemns as awful?” (Beats us what radiological warfare has to do with anything.)

Salon’s Alex Pareene is so excited, he wants to expand the welfare state even more: “Universal income and healthcare won’t create a Marxist (or even Keynesian) utopia of leisure. . . . But it’d give people the ability to spend more time with their families, to enrich themselves, to get educated, and even to just [futz] around a little more.”

Taranto goes on to note that, before the above spinning began, “leaving to spend more time with the family” was almost invariably a Washington, D.C., euphemism for “been fired” or “about to be arrested/indicted.”

Behind the puff and spin, though, as is often the case with Democrat pronouncements, lurk the lies and misinformation.  Two examples struck me.

First, regarding “job block,” this is a concept that’s been floating around for quite a while now.  Back in 2012, when Nancy Pelosi enthused about becoming a “whatever,” “job lock” referred to situations in which people with preexisting conditions were trapped in terrible jobs because they couldn’t risk leaving their employer-provided insurance policy behind.  Many people, of all political stripes, recognized that this was a problem.  (Republicans suggested fixes such as high risk pools or the ability to buy cheaper coverage across state lines.)

What the Democrats are so excitedly celebrating here is a new type of job lock, one that applies, not to people with preexisting health conditions but, instead, one that applies to people with preexisting low-paying jobs.  Why?  Because thanks to Obamacare, a large cadre of people suddenly cannot afford to move up professionally.  They cannot afford to look for a better paying job.  Heck!  They can’t even afford to get a pay raise.  After all, if they’re one of the unlucky ones, moving up by the wrong dollar will cost them $20,000.00.

Thinking about it, rather than saying that people are “job locked” under Obamacare, it’s more accurate to say that they’re “poverty locked.”  While they can’t move up economically that’s to the $20,000 penalty for doing so, they can move down:  they can take a series of low-paying jobs or, if they really want to, just leave the work force entirely.  After all, that’s already what several million people have done in the Age of Obama.

The other Democrat lie is the implication that this thrilling “no job-lock status quo” can last indefinitely.  In fact, the subsidies that people to have health insurance while holding low-paying jobs or being unemployed come about because other people are generating wealth that the government can take and redistribute.  However, as more and more people find that creating taxable wealth for themselves is a counterproductive proposition (earn a dollar more in pay, pay $20,000 more for insurance), fewer people will be earning the kind of salaries that will fund all the subsidies.  This is the perfect illustration of the Thatcher dictum — i.e., that socialism is wonderful until you run out of other people’s money.

The Democrats can spin the CBO’s prediction as much as they like, but the sorry fact is that it creates poverty-lock or job-loss, and that’s both personally demoralizing and economically unsustainable.  In the end, people will find that they’ve gotten more than they bargained for.  Not only will they be poverty-locked and job-lost, they’ll also be uninsured.