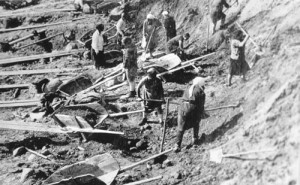 If you read Timothy Snyder’s wrenching Bloodlands: Europe Between Hitler and Stalin

about life West of Russia and East of Berlin from 1933 through 1945, the first thing you’ll learn is that Hitler wasn’t an innovator when it came to mass murder. Instead, he learned about it from Stalin, who had been practicing mass murder for almost a decade before Hitler really caught on to its possibilities.

It was Stalin, after all, who killed tens of millions in the Ukraine by confiscating every single bit of grain they produced, including the grain that was needed to seed the next season’s harvest.  He did this for two reasons:  (1) to break the back of the independent farming class, which did not want to become cogs in the socialist machinery; and (2) to sell the grain overseas to create the false impression the Communism was economically self-sustaining.  Hitler was inspired.

, explains what was going on in these labor and death camps.  Jonah Goldberg introduces just two of the terrible stories Applebaum tells:

A slave who falls in the snow is not helped up by his comrades but is instantly stripped of his clothes and left to die. His last words: “It’s so cold.”

Hava Volovich, a once-obscure newspaper editor turned slave laborer, has a baby, Eleonora, in captivity. Eleonora spends her first months in a room where “bedbugs poured down like sand from the ceiling and walls.” A year later, Eleonora is wasting away, starving in a cold ward at slave “mothers’ camp.” She begs her mother to take her back “home” to that bedbug-infested hovel. Working all day in the forest to earn food rations, Hava manages to visit her child each night. Finally, Eleonora in her misery refuses even her mother’s embrace, wanting only to drift away in bed. Eleonora dies, hungry and cold, at 15 months. Her mother writes: “In giving birth to my only child, I committed the worst crime there is.”

Multiply these stories by a million. Ten million.

Goldberg wasn’t retelling these horrific narratives just to depress us.  Instead, he’s challenging the anodyne, bloodless narratives in which the American media is engaging during its Sochi Olympic’s coverage:

What to say of the gormless press-agent twaddle conjured up to describe the Soviet Union? In its opening video for the Olympic Games, NBC’s producers drained the thesaurus of flattering terms devoid of moral content: “The empire that ascended to affirm a colossal footprint; the revolution that birthed one of modern history’s pivotal experiments. But if politics has long shaped our sense of who they are, it’s passion that endures.”

To parse this infomercial treacle is to miss the point, for the whole idea is to luge by the truth on the frictionless skids of euphemism.

Bad as the Olympic coverage is on NBC and other news channels, what happened on Jon Stewart’s Daily Show the other night is worse.  Staff member Jason Jones went to Russia for the show and did a so-called “humorous” piece in which he looks longingly back on the good old days of the Cold War.  He commits so many fact crimes along the way that it’s hard to keep track.

The one that irked me most was the way Jones created a significant lie by telling a half-truth.  Thus, he gave deserved credit to Gorbachev for signing the paper that ended the Soviet Union, but forgets to show that Gorbachev did so, not just because he was courageous and principled (which he was), but also because the system was already collapsing.  He could retreat elegantly or be buried under a pile of bullets and rubbish.  Between the intense moral pressure from Pope John Paul II, Maggie Thatcher, Ronald Reagan, and Lech Walesla; and the economic pressure from Ronald Reagan, the Soviet system, which was always unsustainable, finally ended, not with a bang, but with a long, drawn-out whimper.

More subtly horrible is the way Jones, playing a Stephen Colbert-esque stupid American, deliberately allows Vyacheslav Nikonov, a Duma member, to run rings around him. Jones may be smart enough and informed enough to be in on the fact that Nikonov is whitewashing the Soviet Union’s past and Russia’s present, but I’m quite sure that the 18-35 demographic watching the Daily Show has no idea what the reality is and was.

While it’s true that the Soviets lost more people to the Nazis than did any other nation or nationality, those horrific losses were in large part due to the sheer inefficiency of the Soviet War machine. The Communists quickly turned their factories to war production, but the products were dreadful. More than that, it was always cheaper for Stalin to throw men at the Germans to absorb the German bullets, than for Stalin to waste his own bullets on the Germans. The sheer number of bodies Stalin had at his command was his greatest weapon — and Russia’s greatest tragedy.

Jones’ and Nikonov’s silly, staged argument about who won the war also obscures a much more important fact: until Hitler’s megalomania got the best of him, he and Stalin were allies during the first years of World War II. Right up until the maddened Nazi dog turned on him, Stalin was perfectly happy to make common cause with Hitler.

And so it goes, with Jones’ being the stupid American schooled by the polished Nikonov. None of it’s funny (as in, at a pure comedy level, it’s poorly done) and all of it is a huge steaming pile of pro-Communist misinformation, ending with Jones begging for a return to the Cold War and laughing at Americans who feared nuclear annihilation.

Here — see for yourself:

Goldberg opened his masterful slam against the media by talking about Hannah Arendt’s famous phrase, “the banality of evil”:

The phrase “banality of evil” was instantly controversial, largely because it was misunderstood. Arendt was not trying to minimize Nazism’s evil but to capture its enormity. The staggering moral horror of the Holocaust was that it made complicity “normal.” Liquidating the Jews was not just the stuff of mobs and demagogues but of bureaucracies and bureaucrats.

Thanks to the Daily Show, we’ve seen that banality sink to new lows.  It’s become the stuff of comedy.  And worse, it’s not the devastating comedy that exposes evil for what it really is.  Instead, through bad jokes and canned laughter, it gives moral stature to an evil system, all the while ridiculing the country that liberated tens of millions of people from endless slavery and brutal death.