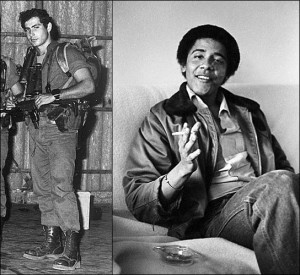 Mano a mano, I’d bet on Netanyahu against Obama every time.  Nation to nation, though, Bibi has the misfortune to be facing off against a spoiled, Leftist, anti-Israel, pot-smoking adolescent who nevertheless controls the world’s greatest military and economic power.  I’m still betting on the Israelis, but it’s not a no-brainer — especially because Obama appears to have reached his conclusions by ignoring stubborn facts and, instead, substituting data that is entirely unrelated to any facts on the ground.

I bring this up because, although the headlines are about Ukraine, no Jew who cares about Israel can have missed Obama’s truly dreadful interview with Jeffrey Goldberg. In it, he made clear that, as far as he’s concerned, the only thing stopping Middle East peace is Israel’s peculiarly stiff-necked intransigence.

To reach this conclusion, Obama shows that he is as delusional about the Muslim Middle East as he is about the rest of the world.  In Obama’s world, Israelis have no interest in peace.  It is, instead, the Palestinians (who strongly support terrorism, who voted for Hamas when they had the chance, who celebrate Jewish genocide, who have never complied with past “peace” agreements, who openly demand a world without Israel, and who have refused to negotiate without preconditions by which Israel gives up her nationhood) who are chomping at the bit to get to the negotiating table.

Don’t take my word for it about Obama’s twisted view of the Middle East.  After you’ve read his own words, check out John Podhoretz’s masterly deconstruction of Obama’s fantasies — as well as his take on Obama’s threats.  It remains to be seen whether Obama’s fact-free preemptive strike against Israel bear fruit in the complacent media.  (I can’t believe I said that.  Of course they’ll bear fruit.)

Caroline Glick, a strong, logical, fearless voice for conservative Israelis, hitback swiftly, telling Obama that his threats cannot frighten a nation that has seen much, much worse.  She also took the time to expose some of Obama’s more reality-challenged statements.  Sadly, I don’t think anyone in the White House is paying attention to Glick.

I don’t expect the administration to pay attention to a Jew.  The administration likes only deracinated Jews who have replaced obedience to God with obedience to the Democrat party.  But maybe the Obama administration should listen to one of Islam’s most prominent spokes people.  Anjem Choudary is clear about the existential inconsistencies between Islam and the West:

If you don’t recognize Choudary’s name, Jim Hoft fills you in:

In 2008 Choudary gloated over the Mumbai terrorist attacks.

Anjem Choudary is a British-Pakistani, who lives on social welfare funds and supports jihad. Choudary takes in a reported sum of £25,000 ($37,770) per year from the British welfare program while soldiers earn only $24,000 a year. Something is wrong with the system.

I used the words “delusional,” “fact-free,” and “reality-challenged” to describe Obama’s approach to the Middle East and even included a link to a Washington Post editorial calling his approach to Ukraine a “fantasy.”  Up until this past week, I would simply have said that Obama has long lived in a Leftist bubble, which has guided his practical and moral approach to the world.  Those weren’t delusions, but grave ideological errors.  This past week, though, we are seeing Obama trading in his foul ideological glasses (which distort everything on which they focus) for actual delusional facts.  Has the bubble gotten so thick about him that our president is literally becoming deranged?

Pot can do that to you, so I’ll leave you with the very surprising words that came out of Gov. Jerry “Moonbeam” Brown of California, when asked about  his enthusiasm for legalizing pot in California (emphasis added):

Well, we have medical marijuana, which gets very close to what they have in Colorado and Washington. I’d really like those two states to show us how it’s going to work. The problem with anything, a certain amount is okay, but there is a tendency to go to extremes, and all of a sudden, if there’s advertising and legitimacy, how many people can get stoned and still have a great state or a great nation? World’s pretty dangerous, very competitive. I think we needed to stay alert, if not 24 hours a day, more than some of the pot heads might be able to put together.