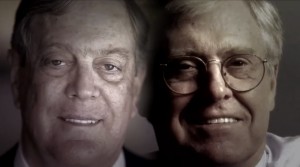 Some of my “real-me” Facebook friends aren’t really friends at all. They’re people who were friends at specific stages in my life, but I haven’t seen them in years and I stick with them on Facebook only out of curiosity. The curiosity factor arises because I view people’s lives like story books — if they were once important to me, I like to see how their personal narrative is progressing. I like to hear about their marriages, and their children, and their parents, etc.

Mostly, I vicariously celebrate their life milestones.  Sometimes, though, I learn things about them that dismay me. That was the case when a person who was a good friend of mine long ago, but whom I haven’t seen in almost twenty years, boasted on Facebook that he had signed a despicable Moveon.org petition “denouncing” the Koch brothers:

We, citizens of the United States, denounce you, Charles and David Koch, for using your vast wealth — more than the combined wealth of the bottom 40 percent of Americans — to corrupt our democracy. You are thereby undermining the most precious gift we possess, our democratic system of government. You deserve to be shamed and condemned by all Americans.

PETITION BACKGROUND We do not denounce the Koch brother’s because their wealth of more than $50 billion exceeds the combined wealth of the bottom 40 percent of all the citizens of the United States, or because they run and own one of the largest petrochemical businesses in the world, or because of their right-wing views. If Americans obey the law and play by the rules, they’re entitled to their wealth and to their opinions. But the Koch brothers are using their vast wealth to alter those laws and rules to their advantage. They’ve established a political front group, Americans for Prosperity, and are building their own permanent political machine, including hundreds of full-time staff in at least 32 states. They are pouring money into federal and state races. The Koch brothers are thereby using their vast wealth to undermine and corrupt our democracy — a shameful betrayal of our nation for which they deserve to be widely denounced.

So far, over 23,000 people have signed a document that could easily have come from the revolutionaries in China during Mao’s deadly Cultural Revolution (Nien Cheng’s Life and Death in Shanghai

vividly illustrates that terrible time); or from the Kremlin during the height of Soviet Kangaroo trials; or from East Germany’s Stasi state (see, e.g, the harrowing film “The Lives of Others“); or from Cambodia when the killing fields ran red with blood; or from Maduro’s Venezuela; or from any other totalitarian political organization that maintains power by targeting and denouncing individual citizens so as to sow fear in and gain control over the general population.

Usually, I look at the idiocies emanating from Facebook friends and ignore the stuff.  After all, if you were born in, raised in, and currently live in America’s bluest regions, you can assume that most of the people you meet will parrot the Democrat party line.  For the reasons I stated above, however, the MoveOn petition transcends idiocy and heads straight for evil.  I therefore left a comment asking my friend a few questions:

Why isn’t MoveOn.org condemning the 58 people and organizations who are ahead of the Koch brothers when it comes to being political big spenders (the biggest of whom, I noted, donate to Democrat causes)?

How is this attack different from the Two-Minutes of Hate directed at Emmanuel Goldstein in Orwell’s 1984?

Does my friend think it’s okay for Sen. Harry Reid, one of the most powerful people in America to use his taxpayer-funded bully pulpit to launch daily attacks against private citizens?

What does my friend think distinguishes what he, Harry Reid, and MoveOn.org are doing from the tactics that the blacklisters used in the 1950s — a tactic that Democrats routinely describe as one of the greatest evils in American history, following closely behind slavery and the way we treated Native Americans?

I expected my friend and his friends to fire back immediately with defenses detailing how dreadful the Koch brothers are and how they deserve to be “denounced.”  Interestingly, so far the only sound I’ve heard is *crickets*.