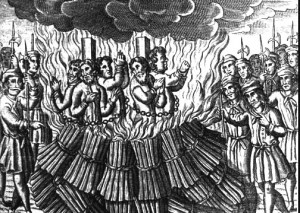 Part of the Left’s ongoing hunt for heretics arises for a simple, pragmatic reason: it ensures that people with opposing views keep their mouths shut. That pragmatic fact, though, doesn’t mean that there isn’t an additional emotional layer giving real satisfaction to the troops who carry out the elite’s marching orders. Jonah Goldberg, who has spent a lot of time thinking about liberal pieties, offers this interesting take on the Left’s recent escalation of its witchhunts:

But while I was prepping for the speech, I read some reviews of Jody [Joseph] Bottum’s new book (which I’ve now ordered). In, An Anxious Age: The Post-Protestant Ethic and the Spirit of America

, Bottum argues that today’s liberal elites are the same liberal elites that we’ve always had. They come from the ranks of mainline Protestants that have run this country for generations (with some fellow-travelling Jews and Catholics, to be sure). But there’s a hitch. They champion a

social gospel, without the gospel. For all of them, the sole proof of redemption is the holding of a proper sense of social ills. The only available confidence about their salvation, as something superadded to experience, is the self-esteem that comes with feeling they oppose the social evils of bigotry and power and the groupthink of the mob.

This strikes me as pretty close to exactly right. They’re still elitist moralizers but without the religious doctrine. In place of religious experience, they take their spiritual sustenance from self-satisfaction, often smug self-satisfaction.

One problem with most (but not all) political religions is that they tend to convince themselves that their one true faith is simply the Truth. Marxists believed in “scientific socialism” and all that jazz. Liberalism is still convinced that it is the sole legitimate worldview of the “reality-based community.”

There’s a second problem with political religions, though. When reality stops cooperating with the faith, someone must get the blame, and it can never be the faith itself. And this is where the hunt for heretics within and without begins.

Think about what connects so many of the controversies today: Mozilla’s defenestration of Brendan Eich, Brandeis’ disinviting of Ayaan Hirsi Ali, the IRS scandal, Hobby Lobby, Sisters of Mercy, the notion climate skeptics should be put in cages, the obsession with the Koch brothers, not to mention the metronomic succession of assclownery on college campuses. They’re all about either the hunting of heretics and dissidents or the desire to force adherence to the One True Faith.

It’s worth noting that the increase in these sorts of incidents is not necessarily a sign of liberalism’s strength. They’re arguably the result of a crisis of confidence.

To use a household analogy, I point out to my children that those of their peers who are happy and self-confident never bully people. Instead, they bring people in. Indeed, oone of my daughter’s friends is the perfect example of this, a sunny soul whose very real popularity rests on the fact that it’s a pleasure to be in his company. It’s only unhappy, self-doubting people who take it upon themselves to make other people’s lives miserable.

In the world of school, I tell my children (a) these kids are more to be pity than censured; but (b) to stay away from them. In the real world, I hope I’m still big enough to pity the anger, fear, and self-loathing that drives the Left but, to the extent they make it impossible to stay away from their reach, they need to be confronted and their policies destroyed.