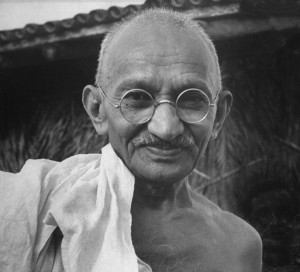 You’ve probably noticed I have very few links in my essay about the morality of Israel’s conduct. I was really in the groove, and didn’t want to slow myself down with links. Now, rather than retrofitting, I’m just being lazy.

What I also didn’t include in the essay was a Gandhi-riff. I am not a fan of Gandhi. True, he led the Indian people to freedom from colonial occupation, but he was able to do so less because of his greatness and more because England was both a moral nation (those were the days!) and a nation utterly exhausted by WWII. With a less moral, exhausted opponent, Gandhi would have been seen for what he was: a fanatic who was willing to let hundreds of thousands or even millions of people die for his extremist beliefs.

When I met up day-before-yesterday with Neo-Neocon, I told her about the Facebook debate I was having and we discussed how some of this guy’s positions reflected an attempt at Gandhi-esque pacifism. Neo remembered this conversation and was kind enough to send me links to some past articles she wrote about Gandhi. I, of course, want to share those links with you:

Already in 2005, Neo was finding disturbing the Gandhi-esque approach to pacifism, one that requires that as many people as possible die in order to make a point. Gandhi’s view, of course, was more nuanced than that, and Neo gives it the attention and analysis it deserves. But it still boils down to something today’s pacifists refuse to understand — pacifism taken to its extreme doesn’t mean less death, it means more death.

In 2007, Neo wrote the almost prescient Dying to leave: Palestine, Lahore, and fanaticism, which discusses the tragedy of ordinary Palestinians trapped behind terrorist lines. Even better, it touches upon the fact that Gandhi was perfectly willing to let people die and suffer for his principles. That Gandhi-esque willingness to sacrifice others is reflected in the high moral tone taken by the person with whom I was debating on Facebook.

And finally, in 2010, Neo again checked in with the Gandhi believers, this time pointing out that Obama’s admiration for the man was possible only because his admiration was equaled only his ignorance.