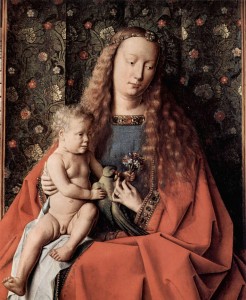 My graphic artistic skill doesn’t extend much beyond stick figures and daisies, and my rather limited visual sense means that my home was designed more with an eye to utility than aesthetics.  Despite my personal limitations, I’m actually very fond of, and quite knowledgeable about, art.

More specifically, I’m fond of and knowledgeable about art through the early 20th century. I’ve taken numerous art history classes and can discuss with some sophistication all manner and times of sculpture and painting. I’ve been to most of the great museums in the Western world,* and bored my children silly by dragging them through the galleries and trying to instill in them some appreciation for technique and symbolism.  (I think the kids were a bit taken aback when I, who never cry, actually got all teary-eyed in the Louvre at the sight of Van Eyck’s Madonna of Chancellor Rolin, a detail of which heads this post.)

Because I am passionate and knowledgeable about classic art, I have very strong feelings about modern art. Some of it is clever, some of it is visually appealing, and the best of it shows technical mastery combined with a strong aesthetic sense.  The artist who springs most readily to my mind when I think of exquisite craftsmanship and rare beauty is Dale Chilhuly, the master glass craftsman.  You’ll see some his most beautiful pieces, not in museums, but in casinos, most notably at the Bellagio in Las Vegas.  (Chilhuly’s own website has some beautiful photographs, if you haven’t seen his work before.)

Too much modern art, though, exhibits neither aesthetic appeal nor craftsmanship.  It’s cheap and ugly.  Before I became politically aware, I thought that modern art’s decline was traceable to only two things: the rise of photography and the fall of God. The first made technical mastery seem redundant, while the second destroyed the impulse to dedicate ones highest skills to the greater glory of God and his creations (including mankind).

I’ve since expanded my original theory about photography’s and atheism’s effects on art.  I now also see that an anti-American, anti-capitalist, anti-Enlightenment ideology also drives modern art. I expanded on that theory in 2011, after a visit to the Los Angeles County Museum of Art, and I’ll quote here the relevant passages from that earlier post:

[At the museum] we wandered about a bit, and found ourselves in vast space housing a collection funded by Eli and Edythe Broad.  It was very modern.  There was a giant fish tank, filled with clear acrylic, in which there appeared to be floating three half-submerged basketballs.  Next to it was a glass display case with three shelves, each containing several electric floor polishers, all resting horizontally.  There was a giant, maroon, shiny egg, broken in two pieces, as if a metallic lizard had recently hatched.  There were several pieces of wood, not quite as big as 2 x 4s, nailed together in a seemingly random pattern.  There was a chain link fence with metal sculptures mounted upon it, each of which was skillfully crafted to look like a child’s plastic pool toy.

There was also a very lovely young woman there, a museum employee (or, perhaps, a volunteer) who was happy to explain what all this stuff meant.  She told us that it illustrated “social mobilism.”  That was a conversation stopper.  By the time we’d processed this bit of linguistic nonsense, she was speaking to other people, and it would have been rude to interrupt to seek further enlightenment.

The more I thought about it, though, the more intrigued I became by that silly phrase.  In the past, art served three purposes:  it glorified the rich and powerful; it glorified God, and, in a pre-photographic era, it recorded the world around us.  To be worthy of artistic respect, all three of those goals required skill and elegance.  Nowadays, though, art is the equivalent of a lost soul.  God is dead (at least in the art world); the rich and power live on television and in glossy magazines; and every cell phone enables us to record our world with almost nauseating frequency.

For those who have graphic skills, money resides, not in cozying up to power brokers (as did the artists who served the Medicis, the Popes, or the various European monarchs), but in providing commercial images, whether for movies, magazines, posters, or anything else.  We may admire the craftperson’s skill, but we don’t call it “art.”

Because the modern world imposes severe limitations on what was once the artist’s purview, the only thing left for the person with genuine artistic talent — or mere artistic pretension — is to produce things that make the critics happy.  If you can’t have wealth, at least you can have praise from a rarefied class of academics and “art” magazine journalists.  It won’t pay the rent, but it will make you feel good about yourself.

These critics, living in or coming from academia, all hew Left.  To them, it’s only art if it challenges what they perceive as America’s failings:  her religiosity; her crass commercialism; her grim, depressing people; and her sexual perversions.  Art, in other words, is anti-American.

Of course, one can’t say that out loud, because Americans, who are generous people and interested in self-improvement, might baulk at being told that they’re spending their money to be denigrated and ridiculed.  So the art world comes up with lovely phrases such as “social mobilism,” which not only serve as a cover for a deep cultural animosity, but also make the self-styled art class feel special.

Keeping in mind the art world’s deep hostility to America, it’s hardly surprising that one of the most recent exhibits to hit the art world celebrates graffiti or, as some of us still call it, vandalism.  In City Journal, Heather MacDonald takes a look at the Los Angeles Museum of Contemporary Art’s newest exhibit, Art in the Streets — or to cut through the euphemism, Scrawls on Walls that Destroy Communities:

There is no clearer example of the power of graffiti to corrode a public space than the fall and rebirth of New York’s subways. Starting in the late 1960s, an epidemic of graffiti vandalism hit the New York transit system, covering every subway with “tags” (runic lettering of the vandal’s nickname) and large, colored murals known as “pieces.” Mayor John Lindsay, an unequivocal champion of the urban poor, detested graffiti with a white-hot passion, but he was unable to stem the cancer. The city’s failure to control graffiti signaled that the thugs had won. Passengers fled the subways and kept going, right out of the city. To the nation, the graffiti onslaught marked New York’s seemingly irreversible descent into anarchy.

Yet in the late 1980s, the city vanquished the subterranean blight by refusing to allow scarred cars onto the tracks. That victory was a necessary precondition for the Big Apple’s renewal in the following decade; it was the first sign in years that New York could govern itself. Riders flooded back—by 2006, 2 million more passengers each day than in the eighties. The subway’s rising ridership was a barometer of the city’s rising fortunes.

What could be more artistic than something that doesn’t just mock America, but that actually hurts her? That’s social mobilism in a nutshell.

Thanks to a new Prager University video, I need to expand even more my list of trends and beliefs that have destroyed “art” and left in its place nothing more than a mess, enlivened by occasional works of aesthetic delight (see Chilhuly, above). According to Robert Florczak, a distinguished artist and art educator, the 20th century devotion to “relativism” has also destroyed art. If no one is allowed to define art or beauty or skill or technique, “art” is at the mercy of every viewer’s opinion — or, more to the point, it’s at the mercy of every cant-spouting, Left-leaning art critic, who maintains his position in the art world by opining whether something is, or is not, art. Think of the critics as being the little girl in this famous New Yorker cartoon from 1925: 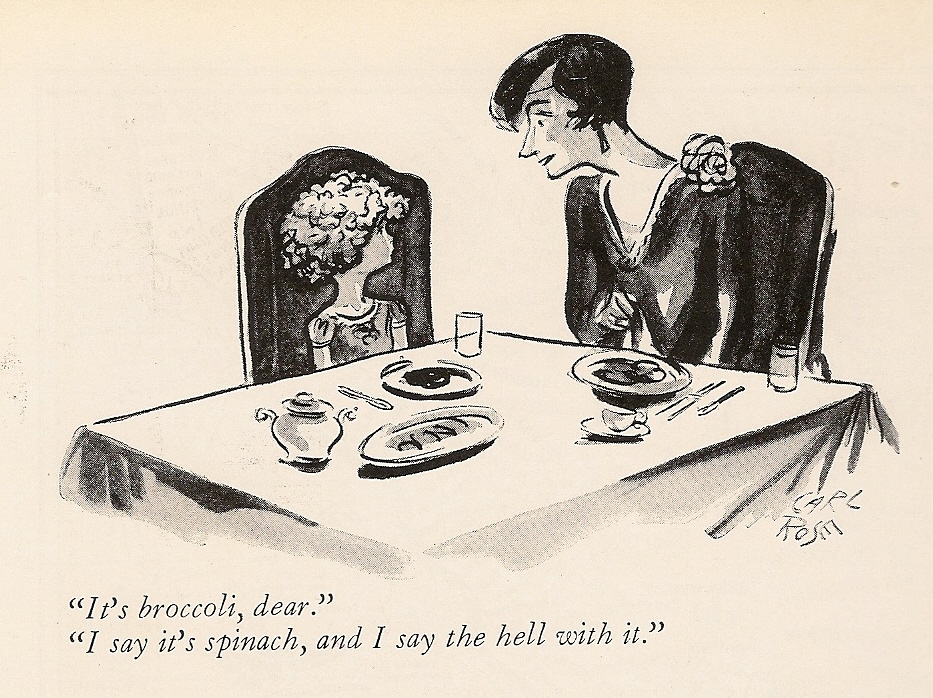 Substitute “art” for spinach, and — voila! — you’ve got a critic.

Oh, and here’s the Prager U video:

_________________________________
*I really have been to some great museums, in addition to San Francisco’s own de Young (with its spectacular Americana collection) and the Legion of Honor. Over the years, I’ve been privileged to visit the Met, MOMA, the Frick Museum, SFMOMA, the Tate Gallery, both America’s and England’s National Galleries, the Louvre, the Vatican collection, the Uffizi Museum, the Rijksmuseum, the Hermitage, as well as so many smaller, specialty museums along the way that I can’t even summon all the names to mind. I am not exaggerating when I say I know art.