Wetlands, a 2013 German movie now opening in the United States, doesn’t sounds like a movie I’ll be seeing any time soon — or ever. According to the rave review in the San Francisco Chronicle:

“Wetlands,” an in-your-face story about bodily fluids and the collateral damage of a family gone wrong, is crass, vulgar and brilliant.

This cringe-inducing, dark comedy follows German skateboarder Helen, who is fighting a severe case of hemorrhoids, not to mention a mother who deserves her own wing in the “Mommie Dearest” Hall of Fame.

Helen (Carla Juri, superb) details every orifice in her body in an easygoing, guilt-free manner, and when she describes her sexual activities with vegetables, she might as well be talking about her day at the farmers’ market. But underneath that carefree exterior is a neurotic, depressed and deranged young woman with a trust issue or two. Juri — remember that name — lends a sense of vulnerability to a character who never ceases to surprise with her outrageous acts and observations.

I’m not a fan of bodily fluids in movies. I still haven’t reconciled myself to the fact that, for the last 25 years or so, a vomiting scene seems to be a requirement for most movies, regardless of genre. With two difficult pregnancies and a history of migraines, I don’t find vomiting entertaining. A movie that focuses obsessively on bodily fluids just isn’t going to work for me, and that’s true no matter how brilliant it is.

Believe it or not, though, I’m not writing this post to offer my opinion about gross-out movies. What I’m wondering is what you all think of the photograph that accompanied the SF Chronicle review. Here’s a screen shot that I grabbed: 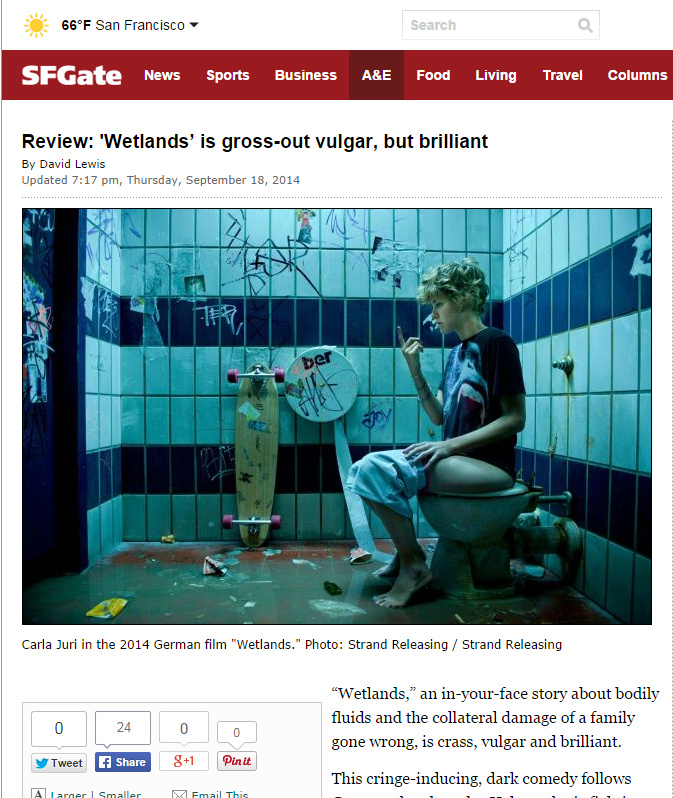 As the well-known children’s book says “Everybody Poops,” so it’s not as if the picture is of some perverse act unique to a small segment of people. In past eras, most notably the Roman era, pooping was a social phenomenon. The beautifully designed toilet in the Roman ruins at Ephesus even had a raised dais so that the assembled “guests” could be serenaded with beautiful music as they went about their business: 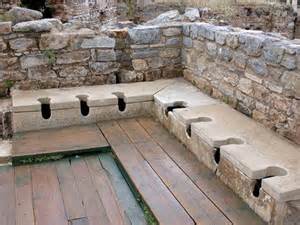 The thing is that, in our modern Western culture, at least until lately, we’ve kept our bodily functions private, not public. To me, it’s still rather shocking to see a picture of a grown woman sitting on a toilet, in a filthy looking bathroom, examining God-alone-knows-what on her finger. Even more shocking is that this picture is in a general interest newspaper accessible to any child. (And no, I don’t know if the picture is in the print edition, but it’s definitely out there in the Chron’s online site.) And yes, I tend to find acute vulgarity shocking.

Am I a prudish Miss Grundy? Or am I the last gasp of some level of societal propriety? Or am I making an ethical mountain out of an inconsequential molehill?