Let me preface this by saying that I have a super-smart, really well-informed cousin.  He’s the one who used to be a prison chaplain and, based upon that experience, came up with a profound insight that I use over and over (most recently regarding the terrible beheading murder in Oklahoma):

My cousin was brilliant all over again this morning, when I posted on my Facebook page an image showing that, while everyone focuses on the small number of Palestinians who refused to assimilate into Israel, the world ignores the hundreds of thousands of Jews who were ethnically cleansed from Arab and Muslim nations from 1948 onward: 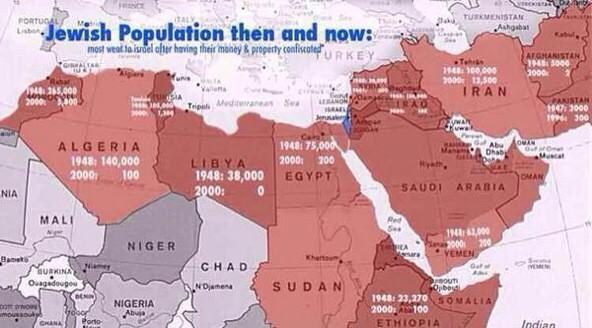 Here’s my cousin’s incredibly erudite, off-the-cuff comment about immigration and assimilation in the Middle East:

The main difference between Israel and the Arabs is a question of humanity toward refugees. Israel was in dire poverty in the era of Mizrachi (i.e., Sephardic immigration from 1948-57). No UN relief money was given to Israel to assimilate 900,000 Mizrachi refugees, who arrived with no money, and no possessions, but with plenty of medical problems (especially eye infections).

The existing Ashkenazi leadership in Israel was horrified by the Mizrachi refugees’ medical problems, lack of language skills( a specially bad problem with Yemenite refugees), and domestic violence. Impoverished Israel first settled the Mizrachi refugees in tent camps, then in hastily constructed settlements on the frontiers.

Within three generations, the results of assimilation are overwhelmingly obvious. Israeli is a homogeneous country, bound by a single Israeli culture and is one of the most educationally and economically successfully nations in the world.

The exact reverse happened with the Palestinians. They have been afforded UNRWA refugee status for 66 years. This contrasts with the UN’s behavior to all other refugees after WWII, who were only given refugee status for 5 years. The Arabs’ recurrent wars against Israel are partially facilitated by UNRWA, especially insofar as it provides safe houses for terrorists and their weapons and produces “educational” curriculum that features genocidal, virulent hatred of Jews.

The Palestinian refugees, rather than making their way to a new, safe land, retreated 10 to 20 miles at most from the homes they abandoned. This contrasts with the thousands of miles that the Mizrachi Jews had to traverse to find safety.

The Arabs have waged an anti-Israel propaganda war based upon the continued existence of these UNRWA supported Palestinian “refugees.” Because of their peculiar status, one that encourages them to think of themselves as perpetual victims and displaced people, the Palestinians have been their own worst enemy. A good example is the fact that Kuwait expelled 400,000 Palestinians after Yassir Arafat openly supported Saddam Hussein’s war on Kuwait. (An act that provides that another good example of Arab/Muslim support for ethnic cleansing!)