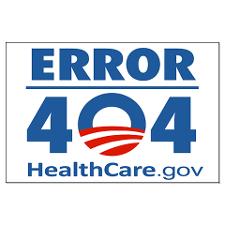 C. Steven Tucker has had a 20 year career as a health insurance broker. Having enabled his clients, just barely, to weather Obamacare’s roll-out, he’s now reporting that the worst is still to come — and that this year is even more horrible than last year because of an Obama GAG rule on insurance companies:

Last year when more than 4 million cancellation notices went out, Americans were able to shop for prices as early as October 1st, granted the initial roll out left much to be desired. In fact, in my opinion it was an unmitigated disaster. Many of my clients spent hours on the phone with Healthcare.gov ‘navigators’ only to find out that their application had then mysteriously disappeared.

Worse yet, because our state’s “C.H.I.P” program was expanded long before Obamacare. The few members of my clientele who actually qualified for an APTC – “Advance Premium Tax Credit”  a.k.a. “subsidy” to artificially lower their premiums were unable to add their children to their subsidized policies. They were instead instructed to enroll their children in Medicaid. Or, they could pay full price for each of their children. The rates for a single child in my state are at least $100 a month for the cheapest “Bronze” plan which includes a $6,000 deductible per person. That’s not exactly ‘affordable care’ when you have three children.

This year, for the first time in 20 years I can not even quote a replacement product because Barack Obama has issued a GAG ORDER to the health insurance industry instructing them not to disclose their January 2015 health insurance rates until after the mid-term elections. This is unprecedented. Normally health insurance premiums are released for public viewing 60 days before the January 1st effective date. Where are the reports on these cancellations and the gag order from NBC, ABC, CBS and CNN? The only news organization that I am aware of that has reported on any of this is the Fox News channel. I can guarantee you one thing, not one of my clients who received a cancellation notice is voting Democrat on Tuesday.