This is it! It’s time for the Thanksgiving edition of the weekly Watcher’s Council contest. This week, we have splendid nominations from Council members, both highlighting their own writing and highlighting things in the blogosphere that they admired, as well as excellent posts from honored guesta. In addition, we celebrate a Council member’s birthday. Yay! Happy Birthday, Tom! 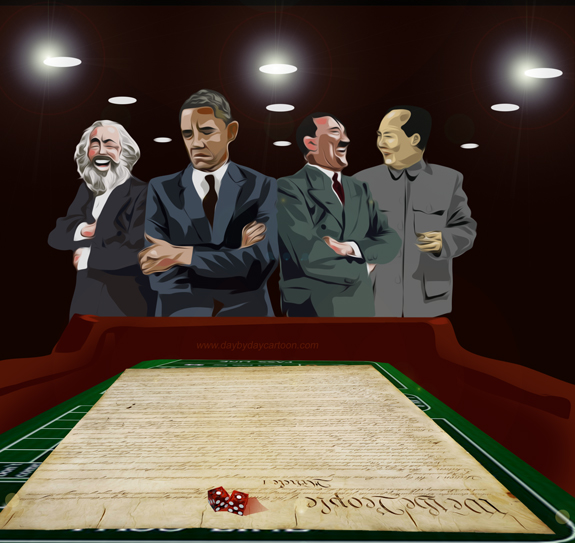 Snake Eyes For the Snake-In-Chief!

From the awesome Chris Muir at Day By Day, of course.

The Council In Action!!

Tom White of Virginia Right is increasing in awesomeness every time we turn around! Aside from his status as a political guru in the Old Dominion, being virtually alone in predicting Dave Brat’s upset victory, he’s now becoming a local go to on other issues as well.

This week, he was cited in the Richmond Post-Dispatch, was interviewed on WRIC, the local ABC outlet and linked to on the station’s website after he wrote a big story locally about how parents in his locality were upset by the odd use of the name ‘Jihad’ in a kid’s math problem, which goes along with the Muslim Brotherhood line about ‘jihad’ merely meaning ‘struggle’ and thus normal behavior…even though all four Muslim fiqhs (Muslim schools of jurisprudence) agree that it’s primary use is to refer to holy war against the infidel. Here’s Tom in action:

You just know that the retired teacher they let follow him is a hard core Democrat, right? Outstanding, sir.

And speaking of outstanding, there’s another little matter we need to get to. Tom White just had a birthday that slipped by my notice, so it’s time for a belated festiva, que sabe?

This little number is called a Shadow Cake…yellow sponge with homemade chocolate buttercream, with some candy roses on top.

And to drink, I’m going to resist the urge to go local and splurge on some Veuve Cliqot.

And, for those of you whom indulge, some wondrous Virginia moonshine, manufactured by men who despise both the revenooers (don’t we all?) and the idea of turning perfectly good corn into ethanol. Instead, they provide us with this nectar. Tom is what used to be referred to as a Renaissance man, someone who does many things superbly well. Aside from his undoubted blogging talent (he was chosen a top political blogger by the AFP in the 2012 elections), he’s a highly accomplished singer/songwriter who gigs locally and has his own studio, is highly active in Virginia politics, runs his own insurance agency, and is a top IT consultant as well.

Of course, all that aside, he’s a great guy and a firm friend. He’s never failed to help out any of us who are mired in techi-type difficulties, and that especially applies to me. Although none of us on the Council have ever met him personally, he was our unanimous choice to be the Council’s treasurer, which is just a small indication of the respect we have for him and the esteem we hold him in.

Me? All I’ll say is that from minute one, Tom was one of those people I instinctively liked. And also on the plus side, he puts up with me..how good is that?

Happy belated my friend. Many, many more.

This week, Le·gal In·sur·rec·tion, The Political Commentator, The Elder Of Ziyon and Seraphic Secret earned honorable mention status with some great articles.

So, without further ado, let’s see what we have for you this week….