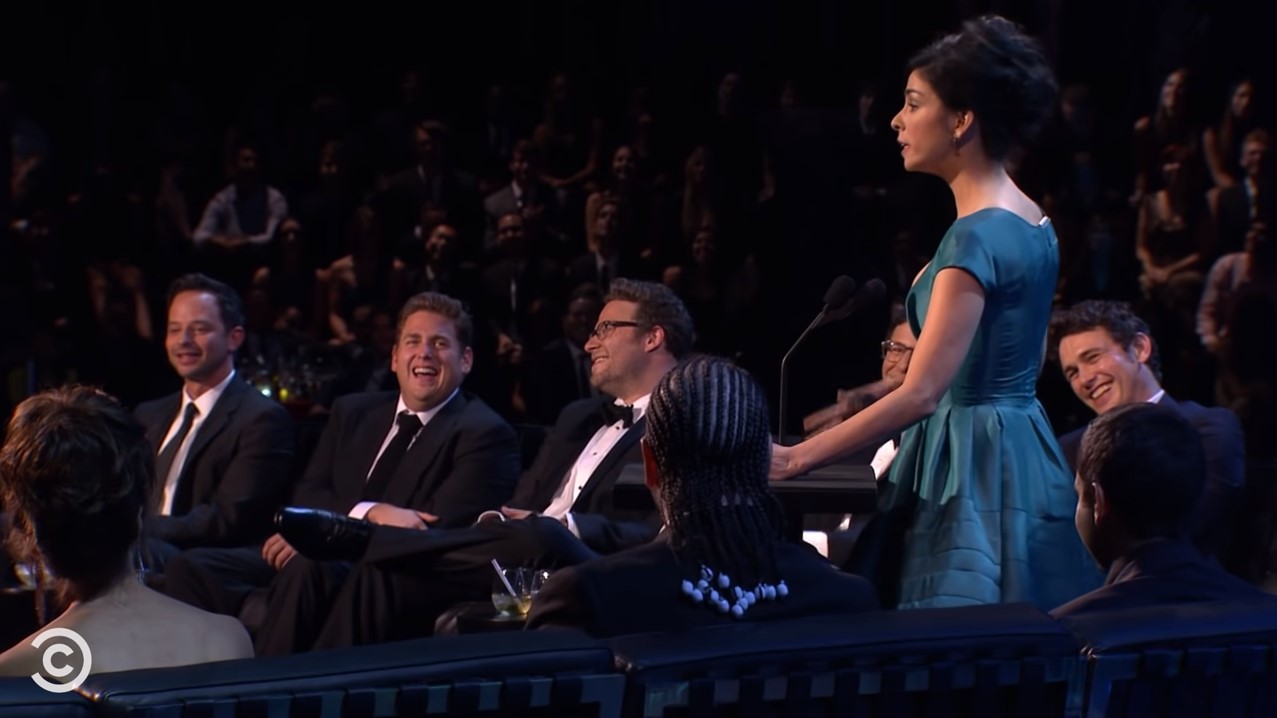 I recently found myself watching 2013’s “Comedy Central Roast of James Franco.” It was a deeply disturbing experience.

The last time I watched a roast was sometime in the 1970s. My father loved those old Dean Martin celebrity roasts.  They were intended to be PG, which meant that the insults were pretty gentle and none were obscene. The celebrities were ribbed about such things as peculiar mannerisms, spending habits, silly clothes, and G-Rated womanizing.

Racism or crude sexuality were never part of these roasts.  Instead, the roasts relied on the same ecumenical comedy that characterized most of television from I Love Lucy through to the Archie Bunker sea-change in the early 1970s: the humor was intended to apply in some way to all Americans. Even ethnic humor — Jewish or African-American or Asian — was homogenized and made into universal truisms about human nature.

The James Franco roast was something altogether different. For one thing, it was incredibly obscene (which is pretty much to be expected of anything shown on premium cable channels). Practically every other word seemed to be an expletive related to scatology or sex. As for the sexual references, in the first 30 minutes (after which I felt so slimed I checked out), all were directed at Franco’s allegedly homosexual habits. (Film clips show Franco enthusiastically french-kissing men; Wikipedia indicates that his private life is heterosexual.) You can see examples here, here, here, and here.

To the extent that these comments about homosexuality were all meant to insult Franco, it surprised me a lot that the roast wasn’t roundly castigated as homophobic. It was after all the adult version of that middle school insult “You’re gay!” That statement, of course, is deemed “bullying” and “homophobic” and apt to get the youthful transgressor who hurled such an insult instantly incarcerated in the Dan Savage Re-education Academy.

Admittedly, this kind of crude sexual joking is a staple in films (leaving one to wonder why Leftists are always “shocked! shocked!” when it shows up in schools).  What isn’t a film staple, however, is the oozing, rank antisemitism the roasters displayed. It’s important to understand the context for these jokes: most of the people on the stage, and most (although not all) of the people making these antisemitic jokes, are Jewish. Franco himself is Jewish, but so are Sarah Silverman, Jonah Hill, Seth Rogen, Andy Samberg, and Nick Kroll, among others.

Of course, Jews have always been famous for aiming jokes at themselves. Just as Yiddish is a language awash in unique words describing the human condition, so too are Jewish jokes heavy on describing the various types you’ll find in closely confined communities, whether in the shtetl or the ghetto.

A few things characterize the classic Jewish jokes. First, as originally told, they were by Jews, about Jews, and for Jews. Second, they have a gentle quality. They recognize the humanity of their subjects, even if the subject is the over-selling matchmaker, the con artist, or the loser. Third — and this flows directly from the humanity in the jokes — many of them have an underlying admiration for the man who can make money despite crippling prejudice; the matchmaker who never loses faith in the importance of the covenant between man and woman; the con man who lives on his wits, rather than being a crude, strong-arm crook; and the nebbish, who is, in so many ways, every man.

To illustrate my point, here are just a few jokes from that marvelous compendium, Leo Rosten’s The Joys of Yiddish

The pedestrian said to the schnorrer (“an impudent indigent,” among other meanings): “Give you a nickel? Why? Why don’t you go to work? You’ve got the arms and legs of a horse!”

“Ha!” cried the schnorrer. “For one lousy nickel, am I supposed to cut off my limbs?”

A nebech (or nebbish, the everyman who makes his own misery) pulled into a parking place on a busy street in Tel Aviv. Along came a policeman.

“Is it all right to park here?” asked the nebech.

“No? But look at all those other parked cars! How come?”

And the nebech’s partner in crime, the shlemiel; or, as the saying goes, “A shlemiel is always knocking things off a table; the nebech always picks them up.”

A shlemiel came to his rabbi, distraught. “Rabbi, you’ve got to advise me. Every year my wife brings forth a baby. I have nine children already, and barely enough money to feed them — Rabbi, what can I do?”

The sage thought not a moment. “Do nothing.”

The shadchen (matchmaker) was impressing the young man with the boundless virtues of a female, and ended: “And to look at, she’s a regular picture.”

The young man could not wait for his blind date.

But when he accosted the shadchen the next day, his voice was frosty: “Her eyes are crossed, her nose is crooked, and when she smiles one side of her mouth goes down….”

“Just a minute,” interrupted the shadchen. “Is it my fault you don’t like Picasso?”

Those Jewish jokes — told by Jews and about Jews — are not vicious. They speak to universal archetypes, and they do so with fondness, even love. Contrast them with just a few of the jokes told at the James Franco roast, one that saw Hollywood Jews perform for all of America. I’ve copied these jokes verbatim from sites celebrating how “funny” they are, so my apologies for their awful language and crude antisemitism:

Nick Kroll: Many of you might not know that Seth has a writing and directing partner named Evan Goldberg. What does this other guy look like that you’re the face of the operation? I assume he’s like a sweaty Orthodox Jew eating a pastrami sandwich, and he said [scrunching up his face and using a thick Yiddish accent] “I did nine dick jokes on page four, and I was thinking that the guys are friends, and then they’re not friends, and at the end of the movie, they’re friends again.”

Sarah Silverman: I can’t tell if this is the dais or the line to suck Judd Apatow’s balls. This dais is so Jewey. What is this, the Comedy Central audit of James Franco?

Sarah Silverman: Jonah is such a Jewy dick, you have to watch his movies through a hole in a sheet.

Nick Kroll: “James Franco is truly our generation’s James Dean. So handsome that you forget he’s only been in two good movies. Dean, of course, died at the tender age of 24 sparing himself the embarrassment of writing self-indulgent short stories and getting roasted by a bunch of jealous Jew monsters.

These awful “jokes” are just the ones that internet publications deemed amongst the funniest things the assembled “comedians” said. There were more, and they were all in the same vein, saying horrible things about Jews. None of them gently laugh at the human condition. None offer insight into human foibles or human decency. All play into the most vile stereotypes about Jews: Jews are ugly, Jews sweat and stink, Jews are obsessed with sex, Jews are eaten by jealousy, and Jews are simply “f***ing.”

These jokes are a primer in self-loathing.  They perfectly reflect the Stockholm Syndrome that has overtaken America’s Progressives Jews.  These young Jews — who are amongst the most recognizable people in America, and have become power brokers in Hollywood — have internalized all of the worst stereotypes about Jews.  They believe this of themselves.

Moreover, as is often the case with people who perceive themselves as defective, they’re trying desperately to be the first to insult themselves, relieving the “normal” person with nothing left to say.  (Sarah Silverman’s stories of her horrific childhood bear out this theory about beating yourself first, before someone else does it.)

This technique is useful insofar as it means that you — the “defective” one — don’t have to hear someone else say something loathsome about you.  It fails utterly, however, when it comes to defusing or destroying the prejudice and hatred.  Those are still out there, hanging in the air, only you’ve become your own executioner.  The hater, by leading you to internalize the hate and then voice your self-hatred, has made you complicit in your own destruction.

I mentioned at the beginning of this post that I felt slimed listening to the grotesque, obscene, scatological, salacious and antisemitic effluvia that flowed from these young “entertainers.”  I was also deeply, deeply saddened.  This is where 50 years of the Leftists’ grand march through American culture has left us.  Jews once thought they were special.  They were God’s chosen people and the people of the Book, bringing justice and morality to the world.  They may have been in the ghetto, but they were not of the ghetto.

Today, America’s most fortunate young Jews lack this cultural confidence.  They find themselves disgusting.  They ‘re not just of the ghetto.  They are the miserable filth lying in the ghetto’s gutters. To cleanse themselves of that stain, they commit ritual seppuku on TV and movie screens across America and across the world.

(NOTE:  I know that some of these Jews, such as Sarah Silverman and Seth Rogen, support Israel, and for that I am grateful.  Having said that, you don’t support the pro-Israel cause by constantly demeaning and stereotyping the Jewish people.)