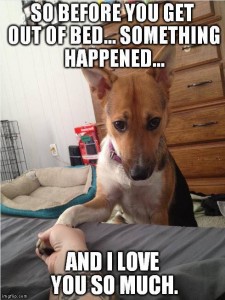 I have to admit to being a little bit crazy when it comes to my dogs. I adore them. They give me undiluted happiness. While other women go goo-goo over babies, I go goo-goo over dogs. That’s why I was charmed and delighted by Thomas Lifson’s confession about his love for his two adorable doggies.

Since Thomas is the founder and editor of the enormously successful and influential American Thinker site, he didn’t write about his dogs just for the pleasure of boasting about their myriad charms or the joy they give him.  Instead, he used a meeting with some young Muslim women as the opportunity to ruminate about Mohamed’s hostility to dogs:

Of course, Mohammed did not like dogs.  The Hadith and other sources record his distaste at their “filth” and even the notion that a dog walking in front of a Muslim praying negates the effect of those prayers. He even called for killing them. For example (and there is much more):

Narrated ‘Abdullah bin ‘Umar: Allah’s Apostle ordered that the dogs should be killed.

Abd Allah B. Mughaffal reported the apostle of Allah as saying: Were dogs not a species of creature I should command that they all be killed; but kill every pure black one.

The Hadith’s note for #2839 says, “The prophet did not order the killing of all the dogs, for some are to be retained for hunting and watching. He ordered to kill the jet black ones. They might be more mischievous among them.

Ibn Mughaffal reported: Allah’s messenger ordered the killing of dogs and then said, “what is the trouble with them (the people of Medina? How dogs are nuisances to them (the citizens of Medina)? He then permitted keeping of dogs for hunting and (the protection of) herds. …[and for] for the protection of cultivated land.

Ibn Mughaffal reported: The Messenger of Allah ordered killing of the dogs, and then said: What about them, i. e. about other dogs? and then granted concession (to keep) the dog for hunting and the dog for (the security) of the herd, and said: When the dog licks the utensil, wash it seven times, and rub it with earth the eighth time.

Abu Zubair heard Jabir Abdullah saying: Allah’s messenger ordered us to kill dogs and we carried out this order so much so that we also killed the dog roaming with a women from the desert. Then Allah’s apostle forbade their killing. He said: “It is your duty to kill the jet-black (dog) having two spots (on the eyes) for it is a devil.

None of the sources I found in a cursory bit of research mentioned what seemed to me to be another reason why Mohammed didn’t like dogs: he had been a caravan raider, and dogs have always (and still do) act as guardians against thieves.

I felt in retrospect that it is a shame that such a basic human instinct as love of furry, cuddly animals is forbidden by a major religion. I wonder if any of the girls will face ostracism for their expressions of affection and liking?

Thomas’s post reminded me of a post I did several years ago (in 2007, to be precise) about my love for doggies.  It started the silly little joke I made whenever my kids asked me which of them I loved more.  After a few clearly pointless efforts to explain that I loved them equally, I just started telling them that I loved the dogs most of all, a line they thought was very funny when they were kids.  (They now love the dogs most of all too.)

Having told that story, I finished that old post with my usual political fillup:

I think it’s a shame that Muslims worldwide have been inculcated into the desert dweller’s belief that dogs are unclean.  It definitely shuts them out from one of the joys of life, which is a loving animal.  I also suspect that their failure to engage with the one animal that wants to engage with us may explain how comfortable they are with animal cruelty.  That cruelty ranges from the horrible Hamas TV show that has laughing children watching tortured animals to the Palestinian military “training” I read about in the early 1980s, which involved ripping the heads off of live chickens.  For many Western children, compassion starts with being taught not to torture the family dog, an animal that then rewards the child with constant and loving companionship.

Seven years later, I read the DiploMad’s memory of the treatment meted out to dogs in Pakistan and it simply seemed to drive home the point I was making:  There’s a correlation between a culture that considers torturing animals to be a form of pleasure and the level of cruelty that culture shows to its own citizens.