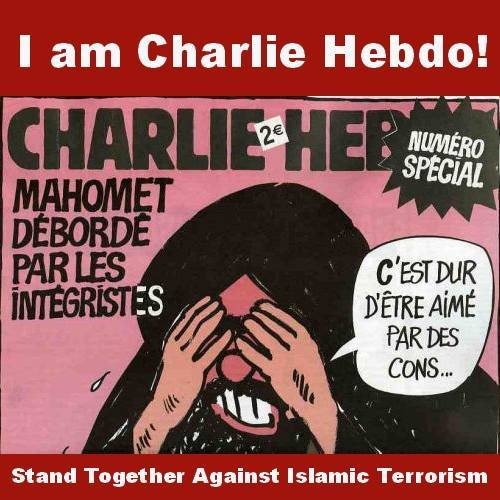 The main story today is the brutal Islamic terrorist attack on Charlie Hebdo, the Parisian humor magazine that had the courage to do what few in the world are willing to do: ridicule Mohamed. Because Charlie Hebdo stood alone in the face of an ideology devoted to murderous censorship, its members got murdered. My liberal Facebook friends, who still can’t get over Todd Akins’ stupidity don’t have a word to say about what happened in Paris. I don’t blame them individually, but I do blame them en masse for their studious and continued efforts to ignore the bloody, raging, ugly elephant in the middle of the formerly-civilized world’s living room.

When you watch the videos — and I see “when” not “if” because people need to recognize Islamists’ savage nature — please do so with caution. Although the videos are not detailed enough to show gore, they’re incredibly disturbing insofar as they show a slaughterhouse murder of the type last seen when Al Shabaab attacked the shopping mall in Kenya:

Does anyone know what the people are saying in these videos?

My questions for you:

1.  Will the French stand up to the Muslims in their midst or crawl and lick their boots?

2.  When, if ever, will Obama concede that it’s terrorism?  (His anodyne response to date says nothing about terrorism or Islam.  Others have noted, of course, Obama’s famous statement that “The future must not belong to those who slander the Prophet of Islam” and that his administration chastised Charlie Hebdo for using free speech against Islam.

3.  What should countries do to combat a threat that isn’t aligned with any specific nation, but that circles the globe through various cells?

4.  Assuming 2016 gives us a president who loves America and wants to protect her from violent Islamism, how far can we go on our soil to stamp it out without destroying our constitution in the process?

Please feel free to go beyond these questions if you want to join the conversation at this Open Thread.

(Illustration thanks to Greg, at Rhymes With Right.)