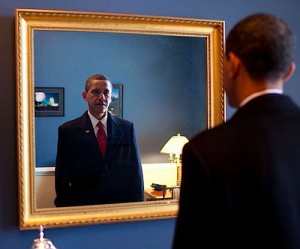 Hey, all!  I’m back . . . finally.  Our trip was great, and I’ll have more to say about it (or at least one part of it) later.  Because I have legal work awaiting my attention, though, I can’t really write at length.  I therefore just wanted to say something briefly about Obama’s “love” for country.  To do so, I have to take a quick side trip to my adolescence.

I think that, objectively speaking, both my sister and I were fairly pretty when we were young.  We certainly weren’t ugly, and we had all the nice middle class attributes of straight teeth, contact lenses, fairly good skin, etc., not to mention the ultimate physical attribute — youth. Both of us, however, have now and have always had incredibly low self-esteem when it comes too looks.  I’ve sometimes wondered about this, because I do remember my mother always saying “I love you.  You’re so beautiful.”

Today, mother reminded me of what I’d forgotten.  She was at our house for a family gathering and, within very short order, while admiring my daughter’s well-put-together outfit (my daughter has an artist’s eye for clothing) and saying how much she loved my daughter, my mother also managed to criticize my daughter’s posture, her skin, and her hair.  And the memories came flooding back.

What I always got from my mother was “You’re so beautiful.  It doesn’t matter that you have such bad skin.”  “You’ve got such lovely posture.  It’s a shame about your nose, but I’m sure it can be fixed one day.”  “You have such lovely eyes.  Too bad about your hair.”

At the end of our childhoods, both my sister and I had a single response when we heard the phrase “You’re so beautiful”:  Mother was either a fool or a liar.  How could we be beautiful if our skin, or our hair, and or our noses, and anything else that Mom noticed in passing were flawed?

My mother is a narcissist, albeit a passive aggressive, basically loving one.  Wife beaters are narcissists, who have abandoned the passivity in favor of the aggression.  If pressed, many will say that they “love” their wives, and that part of that “love” means that they have the responsibility for fixing their wives’ never-ending lists of flaws.  Put another way, the beatings or endless verbal put-downs are for the wives’ own good.  The “loving” abuser is trying to make his wife a better person, whether he’s trying to improve her performance in the kitchen, the bedroom, or the workplace.  The beatings will continue until morale improves — and the wife beater has very high standards to which he wants to raise the wife he “loves.”

The deal with my mother and the deal with Obama is that, being narcissists, behind the arrogance (in his case) or the charm (in her case) lies . . . nothing.  And if you’re the mother, or the abusive spouse, or the president of the United States, and you know, in some deep, secret part of you, that you’re really a nothing, you better make sure nobody else sees that emptiness.  The best way to maintain your greater worth is to prevent anyone close to you, anyone close to you, or any person or thing under your control, from raising themselves to a height from which they can look down on you, the narcissist, and see . . . nothing.

And that’s how Obama loves America.