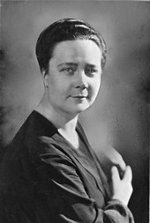 “Three hundred years ago it mattered comparatively little. But now that you have the age of national self-realization , the age of colonial expansion, the age of the barbarian invasions and the age of the decline and fall, all jammed cheek by jowl in time and space , all armed alike with poison-gas and going through the outward motions of an advanced civilization, principles have become more dangerous than passions. It’s getting uncommonly easy to kill people in large numbers, and the first thing a principle does — if it really is a principle — is to kill somebody.”

While Sayers was writing this, Stalin was purging the Kulaks. Three years later, Hitler remilitarized the Rhineland and took over Austria — and Chamberlain shook his hand and wished him well.