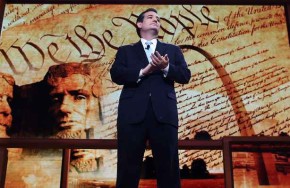 A temporary diminution in my overwhelming work load has finally given me a window to blow about Ted Cruz’s candidacy. Briefly, I’m for it. Obama has taught us that, in today’s world, it’s not experience that matters, it is indeed being a standard-bearer for an overarching ideology.

Americans have now had six, going on for seven, years of Obama’s ideology and they’ve seen the results:

In this, Obama has consistently been aided and abetted by the Democrat Party.  Worse, whenever it’s been faltering, its received helpful boosts from the GOP.

Against this backdrop, running a neutered GOP candidate who, at home, stands, for everything Obama stands for, only with weaker sauce, and, abroad, lacks the backbone to fight against Islamic (and, inevitably, Chinese) aggression abroad, is a sure way to lose.

Finally, though we have an alternative, in the person of a man who liberal law professor Alan Dershowitz describes as one of the most brilliant Harvard law students he’s ever had.  Briefly, Ted Cruz

To those who say “Cruz can’t win,” I say “That’s only true if you start with a defeatist attitude by buying into MSM and GOP slander.”

Now is the time for the pendulum to swing far, far away from Obama. If the Republican pendulum apathetically droops in front of a Jeb Bush or Lindsay Graham, we will lose. This is the last chance, truly the last chance, for the American Constitution to take center stage in an election and in our lives. If Hillary or Jeb wins, America as a Constitutional nation is dead and gone.