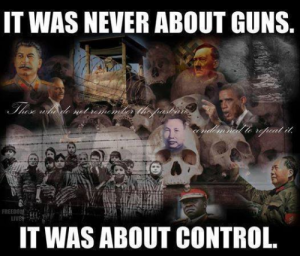 Let me start by saying that I think Charles Krauthammer is one of the most brilliant, thoughtful, informed conservative thinkers around.  About eighty percent of the time when I read something he’s written I find myself nodding my head in agreement or exclaiming enthusiastically (and yes, I talk to myself) “That’s right!  I never thought of that.”  But when Dr. Krauthammer is wrong, well, he needs to be called on it in the same way as anyone else would be — and Dr. Krauthammer committed a doozy of a wrong in his most recent article about the Democrats’ inevitable anti-gun Kabuki performance in the wake of the shooting in Roseburg, Oregon.

If you read Dr. Krauthammer’s article, he’s correct about his two most pertinent points:  One, the Democrats’ posturings are theater, and two, they really want to confiscate guns.  The problem is with Dr. Krauthammer’s inner Canadian, which managed to ooze out in the middle of his otherwise excellent discussion (emphasis mine):

The reason the debate is so muddled, indeed surreal — notice, by the way, how “gun control” has been cleverly rechristened “commonsense gun-safety laws,” as if we’re talking about accident proofing — is that both sides know that the only measure that might actually prevent mass killings has absolutely no chance of ever being enacted.

As for the only remotely plausible solution, Obama dare not speak its name. He made an oblique reference to Australia, never mentioning that its gun-control innovation was confiscation, by means of a mandatory buyback.

Dear Dr. Krauthammer — disarming law-abiding citizens does not work.  Guns are tools.  What matters is the culture, not the tools. Canada has so far been blessed with a fairly homogeneous Anglo-Saxon culture that reflects the 19th century Britisher’s respect for the law. The absence of gun violence in that country isn’t because of the absence of guns, but because of the absence of violence. When violence creeps in, guns both a sword and — very significantly — a shield.  Take away the shield, and all you’re left with is a sword with the point at innocent people’s throats.

Let me start with that damn Australian canard.  Beginning in 1969, gun homicides in Australia started a consistent decline.  After the gun ban, barring a single uptick in gun homicides the year after Australia enacted the ban, gun homicides continued to decline at almost the same rate as before (meaning that the gun ban made no difference to the decline).  What changed in Australia wasn’t the guns, it was the culture.

Incidentally, the culture changed at the same time in America, which also saw a decline in homicides despite a strong increase in the number of guns in private hands.  The only difference between the two country’s statistical trends is that, with the gun ban in place, Australia saw a steep increase in other types of crimes, especially rape:

Even Australia’s Bureau of Crime Statistics and Research acknowledges that the gun ban had no significant impact on the amount of gun-involved crime:

Moreover, Australia and the United States — where no gun-ban exists — both experienced similar decreases in murder rates:

So here’s a good Second Amendment slogan for you:  “Gun control is sexist, because fewer guns mean more rapes.”

Oh, and let’s not forget that mass shootings have tended to be statistically anomalous, so it’s very hard to determine whether any kind of gun control approach makes a difference.  Mass shooters don’t fit the profile of ordinary murderers — and gun control statistics from nations that have banned guns (England, Australia, Mexico, etc.) versus those that haven’t banned guns (the US) indicate that nothing deters the garden-variety killers — the ones who commit the vast majority of gun homicides — are best deterred by an armed citizenry.  Moreover, as I’ve demonstrated elsewhere, the only thing we know with certainty is that, when it comes to high death counts with mass shootings, nothing beats a government that has taken all the guns for its own use.

And here’s something those Australians might want to consider as they go about congratulating themselves for defeating a statistical anomaly — thanks to the slow but steady influx of Muslims into Australia, their culture is about to change again. Less than a year ago, jihad came to Australian in the form of a shootout and hostage crisis in Sydney.  Recent history shows us that, once a country is targeted for jihad, the pace only accelerates — and the jihadists aren’t picky about using legal weapons.  Additionally, the jihadists are okay about bypassing guns if airplanes or pressure cooker bombs will get the job done too. (I suspect the jump in rape also has something to do with the new crop of immigrants.)

So no, Dr. Krauthammer, there is absolutely no reason to believe that gun grabs will result in fewer deaths.  Man, an ingenious and innately violent animal, if placed in a culture that does nothing to civilize that innate violence, will find other ways to kill — and the violent man’s unarmed victims will have very little with which to defend themselves.  I’ve commented before that, when there was a lock down at my children’s school owing to a false claim about a shooter on the campus, the more proactive classrooms armed themselves with heavy books, blackboard pointers, and other objects that they intended to hurl at the shooter.  As we know from those rocks in Jerusalem, a heavy object to the head or a barrage of heavy objects to the whole body, can easily disable someone.  A well-aimed gunshot can do the same — but in the gun-free zones that shooters crave, we deny that succor to potential victims.

The last thing I’ll add is that we’re going to see some very interesting stuff happening in gun-free Europe now that the Europeans have opened the door to an extremely violent culture that sees women as reasonable rape targets and that believes it’s entirely appropriate to use whatever weapons it can (guns, knives, fists, pressing masses of bodies, hurled backpacks, etc.) to achieve its goals. And I can absolutely bet you that the native Europeans, those who aren’t so self-loathing that they welcome these assaults, will strongly bemoan the weapons they so blithely handed to governments that are alternately ineffectual or tyrannical.

UPDATE: And by the way, Ben Carson was absolutely right that, if Jews had been armed, they wouldn’t have been led like lambs to the slaughter. What made the Holocaust possible was the complete absence of any push back, either against the Nazis or against the local people — especially the Slavic ones who so cheerfully aided, abetted, and watched the slaughter. (See Lara Logan’s “The Hidden Holocaust”)