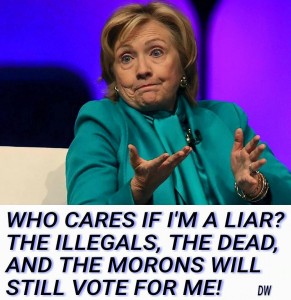 I wasn’t able to watch the Hillary hearings (and doubt if I could have stomached them in any event), but one of my friends followed them on and off throughout the day, and had this to say:

I was able to stomach bits and pieces of the Hildabeast hearings, but only in a few minute increments.  A few very important points came out of the hearing.  In the year prior to the attack, Amb. Stevens and his crew forwarded to the State Dept. over 600 requests for increased security.  Hillary said she received none and left all security decisions in the hands of “trained professionals.”

That testimony begs several questions:  Who made the decisions.  Who supervised those persons?  What was the basis for not only refusing the requests, but reducing security during the year prior  (the answer, as I have been opining since 2013, has to be politics in an election year combined with criminal negligence)?  And how is it that Hillary did not deem it important enough to inquire about the security of the Libya mission as public reports of rapidly declining security mounted, Britain pulled out its mission, and the Benghazi mission had at least one dry run attack?

None of the Republicans asked those specific questions. Nor did they ask anything about the risk assessment undertaken a month prior to the attack and forwarded by address to Hillary in which the State Dept. personnel on the ground determined that any sizable attack – precisely what happened a month later – would overrun the compound.

In perhaps the most shameless moment of the afternoon, Hillary was asked about it getting so bad in Benghazi that Ambassador Stevens said (paraphrased) that they should apply to foreign countries to pay for adequate security since the State Dept. was now refusing all of their requests.  Hillary responded that she could see Amb. Stevens, who had a good sense of humor, laughing as he wrote that.

Also of note, Hillary explicitly told several individuals the day after the attack that it was a terror attack and that the movie played no role.  She told that to her daughter in an email and to the President of Egypt.  Thus what happened in the aftermath was the most transparent of coverups.  And it appears my theory as to all of this is now mirrored by Sen. Graham:

On Hugh Hewitt’s radio show this evening, Lindsey Graham connected the State Department’s seemingly inexplicable failure to respond to hundreds of pleas for better security–even as the security situation in Benghazi worsened, and the British withdrew their personnel–with the White House’s now undeniable lies about what happened, after the fact. Both, Graham suggested, were motivated by the same political concern: the election was approaching and the Obama campaign was trying to sell the claim that al Qaeda was on the run. Obama didn’t want to look like Bush, with fortified compounds and reliance on military personnel. Rather, he wanted a light footprint consistent with his pacific preference for leading from behind. Ergo, no reinforcement of the dangerously exposed State Department personnel in Benghazi.

There were also several other interesting points.  One, Hillary could recall only one direct conversation with Amb. Stevens after he arrived in Libya.  He did not have her email address.  She actually spoke far more with Sid Blumenthal about Libya than she did with her ambassador.  Hildabeast also took great umbrage at people pointing out that the ARB Review Board did an incomplete investigation and looked only at mid-level employees and below.  The hypocrisy and cynicism was so thick you could cut it with a knife.

Gowdy did get onto the emails and should have been able to skewer Clinton, but he had not done his homework.  Specifically, Hildabeast claimed that 95% of all her emails would have been captured because they were sent to .gov addresses.  We know that is false, but there is the question of why it took the State Dept. over two years to respond to subpoenas that should have included all of her emails on Libya.

In 2013, in response to Gowdy’s asking the State Dept. to provide responsive documents, they were able to cobble together all of 10 Clinton emails.  Had Gowdy run down who conducted the search for the State Dept., where they looked, and why so few were available, he would have eaten Clinton alive.  Instead, she skated on what should have been low hanging fruit because no one has been bringing the hammer down on the State Dept. and threatening jail time for ignoring Congressional subpoenas.  Just horrid.

Expect the press to pretend that Hillary “won” and that all Benghazi questions are now over. The reality is that the questions have not been answered. It appears ever more likely that Hillary was either grossly incompetent (within the realm of possibility) or that she is hiding political decisions that could only have been made at her level or above and that cost the lives of four Americans. There is plenty of fodder in the above to question Hillary (and do attack ads) assuming her candidacy lasts until next summer. As to the Democrats on the Benghazi Panel, not a single one of these bastards did anything but shill for Hillary. As to the Republicans on the panel, I would give them a C -. Gowdy did a poor job of preparation personally and in preparing most of the others.