With France now following in Russia’s lead and going after ISIS in Syria, people are asking why Obama is not being more aggressive in his approach to taking out ISIS. The French air attack on ISIS’s Raqqa headquarters, munitions depot, and recruiting station revealed that America has excellent intelligence on ISIS because it provided necessary satellite data. America had compiled this data for a drone attack on a target of one: Jihadi John. 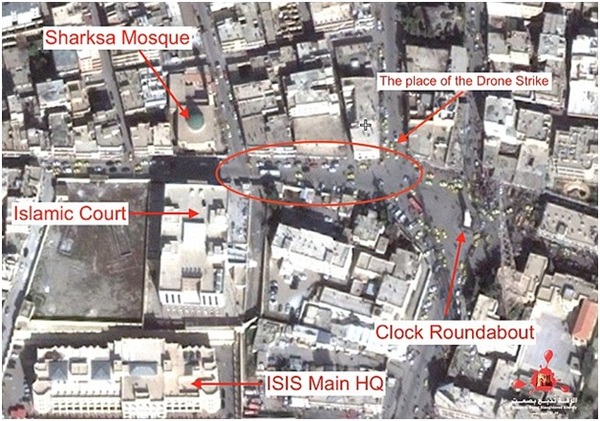 Our military could have dealt a fairly devastating blow to ISIS by dropping an extra bomb or two just a block away from Jihadi John’s location  — but it didn’t. What exactly is going on here?

It turns out, if one is to believe the information coming from the Obama administration itself, that Obama is pathologically opposed to any possibility that an American action could injure or, worse, kill a civilian. To this end, the Obama administration has promulgated a new rule of engagement: “Zero civilian casualties,” despite an enemy that deliberately embeds itself among civilians:

U.S. and coalition air forces are aiming for zero civilian casualties in airstrikes against the Islamic State in Iraq and Syria (ISIS), frustrating some lawmakers who say the military campaign is progressing too slowly.

In practice, the strategy means that sudden developments on the ground can often force pilots to call off airstrikes. If a car suddenly drives up to an enemy checkpoint, for example, a strike would be delayed until it could be determined that no civilians were present.

The only exception to this new rule is drone strikes, which continue despite claims that far more civilians die than do designated terrorists. Obama long ago established that he personally approves every drone strike. Thus, in 2012 (an election year), The New York Times boasted on Obama’s behalf that “Mr. Obama has placed himself at the helm of a top secret “nominations” process to designate terrorists for kill or capture, of which the capture part has become largely theoretical.”

The President’s overwhelming compassion for civilian well-being continues with his unwavering insistence that America must accept tens of thousands of refugees from Syria (almost all of whom will be Muslim) as well as refugees and immigrants from other Muslim countries over the next two years. These new Muslim residents will join the hundreds of thousands that have already entered America on Obama’s watch (and that have almost certainly set up ISIS sleeper cells throughout America). Obama has already announced that he will veto any bill requiring the government to user greater scrutiny on Syrian and Iraqi refugees than it presently does. Under the proposed bill, high level government officials would have to certify that each refugee admitted had undergone rigorous scrutiny and was not a threat to American security.

So we get it already: President Obama will do anything to protect civilians.

Anything that is, as long as one specific group of civilians is excluded from his overarching compassion for innocents in the path of war: Obama has no compassion for Americans.

Americans know that approximately 10% of all of the world’s 1.6 billion Muslims support radical, jihadist Islam. Moreover, they know that this 10% of Muslims is not evenly distributed throughout the world. Instead, the bulk of the 10% who share ISIS’s or Iran’s dream of an Islamic world caliphate live in the countries from which the new refugees hail. Americans therefore understand that there is a better than 10% chance that the Muslims brought into America will attempt through ballot or bullet to reduce America to a Third World satellite of a Middle Eastern caliphate.

Americans have also been paying close attention to government inefficiency, whether it’s the TSA’s inability to stop 75% of prohibited items to get onto planes, the Office of Personnel Management’s failure to secure federal employees’ information, the disgraceful death toll and treatment failures at VA hospitals, or the disaster that was the Obamacare rollout. Our federal government consistently fails at the tasks assigned it. Americans therefore reasonably believe that the federal government will muck up its responsibility to scrutinize an immigrant population with a high percentage of potential terrorists.

Obama has brushed all these concerns aside and continues to foist onto worried Americans a refugee population that is very likely to contain significant numbers of mass murderers. So next time Obama babbles on about his compassion for civilians remember that that he’s not feeling any actual compassion for you, the American citizen he represents.