This poster is populating my Facebook feed, courtesy of the many Progressives I number among my real-me friends: 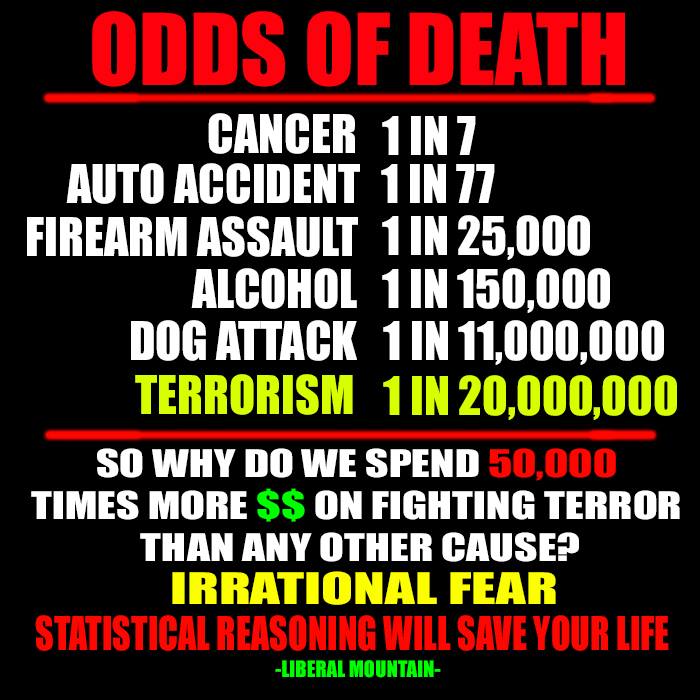 I find it a rather fascinating poster because of the underlying assumption that the items in the list are comparable in terms of either our ability to challenge these risks, the direction of the trend lines for the risks, or the long-term stability of each risk. Picking my way through the data made me think of another thing that’s making the rounds on my Facebook feed, which is a useful chart putting in one place the most common rhetorical fallacies.

When I look at the risks, my thoughts (aside from wanting to know the source of these statistics) are as follows:

Cancer (1 in 7) – Three thoughts about cancer. First, our high cancer rate is actually a sign of how successful we are as a culture.  Cancer is a disease that mostly attacks people as they get older.  In poor, backwards cultures (such as the one ISIS is creating, as well as large swaths of Africa, the Middle East, and India), too many people are dead by their 40s to make cancer a meaningful risk.  In a weird way, cancer is the luxury disease of affluence, one that strikes people who haven’t died first of starvation or disease.  Please understand that I don’t mean to denigrate cancer’s horrors.  I know too many people who have suffered and died from it (including close family members) to be cavalier about it.  I’d just like to point out that, while cancer is indeed a risk, we’re weirdly fortunate to be the kind of culture that lives long enough to get this horrible disease.

Second, we are now and have been for a long time addressing cancer and, thankfully, survival rates have been improving.  A few charts illustrate this point: 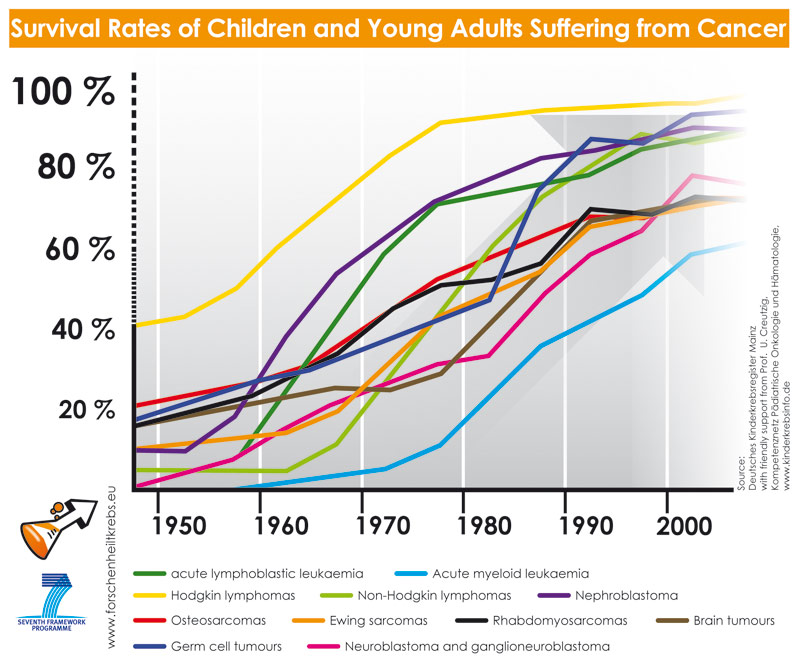 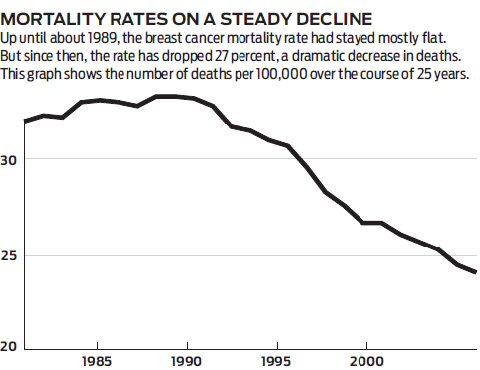 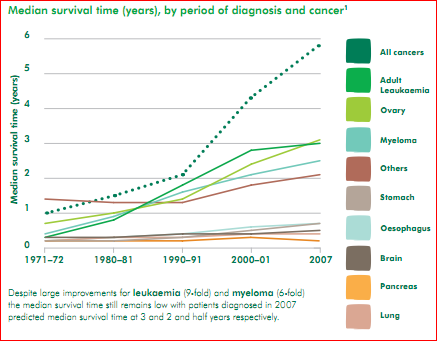 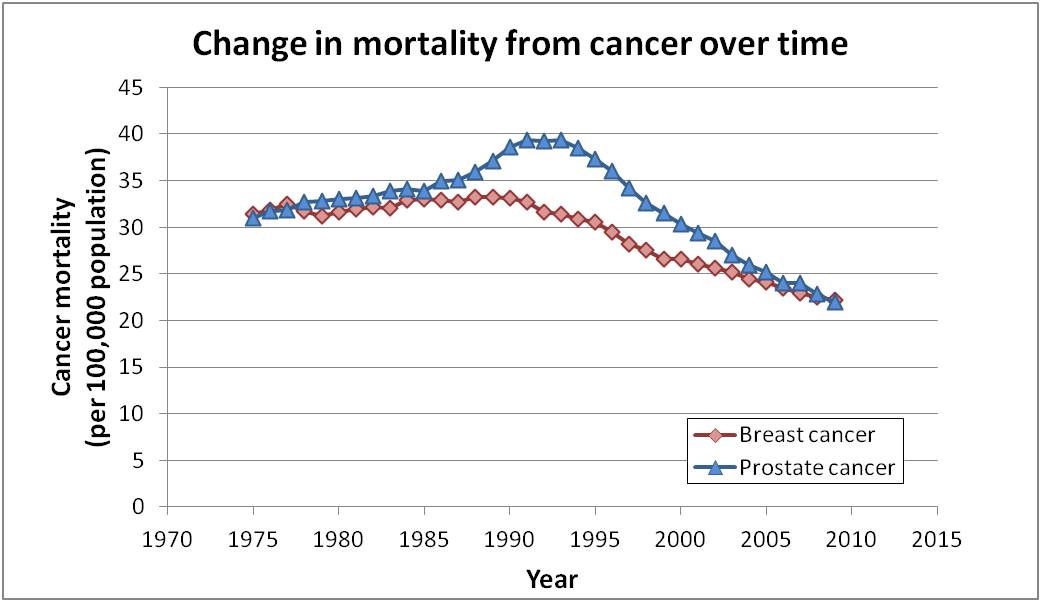 Third, the single best way to beat cancer is to identify it when its presence is negligible and to treat it aggressively at that time. The longer you wait, the worse it gets and the more resistant to treatment. Keep this thought in mind when we get to that last item — terrorism — on the list.

Auto accident (1 in 77) – Auto accidents are a reality of human behavior. Still, we’ve done a great deal in the past few decades to mitigate the risks. Our cars are more crash safe than ever. Indeed, those of us over 50 remember clearly the “unsafe at any speeds” cars from our childhood. They had no crumple zones, airbags, safety glass, or side reinforcements. Window glass turned into blades, steering wheels impaled people, cars crumpled like accordions from stem to stern, etc. Our roads are graded, our intersections lit, and our exits clearly marked. Drinking while under the influence is illegal. Teenagers in my state, and many others, are not allowed any passengers other than family or adults for the first year after they get their licenses.

But we still cannot address all weather conditions, all heart attacks and black-outs behind the wheel, all incidences of bad luck, all people who drive drunk or stoned despite the laws, all teenage stupidity, all depressed people who commit “suicide by auto accident,” all criminals making a getaway, etc. Nevertheless, as the chart below shows, we are safer on our roads than ever before, and that’s despite the ever-increasing number of cars on the road. 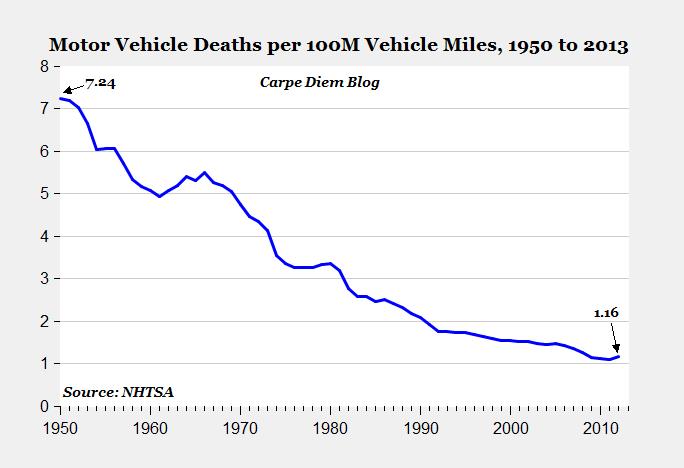 Firearm assault (1 in 25,000) – Suggestions for decreasing this number: Either stop gun control in inner cities such as Chicago, where only the criminals have guns; or deny guns to anyone who is a Democrat, since Democrats, or people the Democrats view as “theirs,” seem to be especially prone to using guns, not in self-defense, but for criminal activities. And of course, guns are protected by the Second Amendment because the founders understood that, when it comes to using guns to kill, nobody beats government. This means citizens must be armed to defend against their own government or, if the government is laid waste, to defend themselves in the absence of government.

Alcohol (1 in 150,000) – I have no idea what this number means. Does it talk about people who are dying from alcohol-related diseases, who are shot while committing crimes when intoxicated, who murder others when intoxicated, who drive drunk? It’s a meaningless number. Aside from that, in a truly multicultural country of over 300 million people, aside from limiting situations in which people can drink, and criminalizing drunken behavior, what the heck are we supposed to do?

Dog attack (1 in 11,000,000) – Again, this is a random thing against which there is little we can do. It’s also, I suspect, a flat-line number, that shows minimal movement over the years.

Terrorism (1 in 20,000,000) – Terrorism is a symptom of a deadly disease. Anybody with half a brain understands that

(a) If left unaddressed, terrorism increases, as is readily shown by ISIS’s trajectory in the last few months;

(b) If the terrorists are unopposed they will ratchet the violence up to full war level. When Germany did this at the end of the 1930s, around 40,000,000 around the world died, and many more than that number suffered appallingly.

(c) If the terrorists are unopposed and win the war, they will control our lives. Looking at ISIS’s territory, if that happens, those of us not slaughtered in the first instance will probably wish we were dead.

In other words, terrorism is a cancer and needs to be addressed as aggressively as the cancer topping the list in the poster. Once it metastasizes, there’s little that can be done.  And that is why, the fact that terrorism is a statistically small risk now is precisely why we need to attack it aggressively.  As with cancer, the longer you wait, the worse it gets and the harder it is to fight.