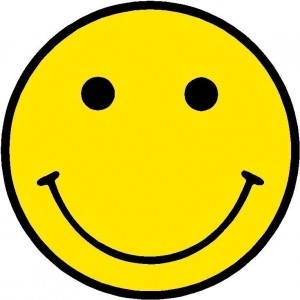 I believe strongly that we have an affirmative obligation to be as happy as we possibly can under ordinary circumstances. That last clause, of course, means that ISIS-held Yazidi sex slaves don’t have to be happy — their circumstances are hardly ordinary.  However, ordinary, average middle class women and college students, to name just two types of people in America, need to make every effort to define their lives as happy ones. And no, I’m not being fatuous. Moreover, this is not something I just say; it’s something I live every day.

I was raised in a home that wasn’t particularly distinguished by happiness. Certainly my parents’ own lives weren’t templates for joy.

My father never knew his own father who went to America in 1919 and whose mother then refused to follow. By age five, Dad was in an orphanage in Weimar Berlin, something that was actually better than the slum in which he’d previously lived. By age 16, at the invitation of a teacher who had one extra visa, he left his mother and sister to make aliyah to Palestine. At 19, Dad enlisted in the Royal Air Force, and spent the next 5 years doing battle as an infantryman all over the Mediterranean theater. (And no, I don’t know why an RAF man would be fighting in infantry.) At 28, he got married; at 29, he was involved in another war, this time for Israel’s independence. At 35, he came to a new country, where he did raise a family, but never succeeded in making a meaningful living. He was a good man, loyal and steadfast; he was also deeply depressed and very angry most of the time.

My mother’s life wasn’t a picnic either, at least not after she turned 10. Up until 10, Mom enjoyed tremendous European affluence . . . and then her parents’ marriage fell apart.  With the marriage gone, so was that economic security. When she was 12, Mom moved with her father to Tel Aviv because, although non-religious, he was an ardent Zionist. He was also an ardent womanizer, which made for an unhappy home life. When she was 19, Mom ended up in a Japanese concentration camp, where she lived for the next three-and-a-half years. Liberated at 22, she was repatriated to Palestine where (a) she married my Dad and (b) ended up fighting in a second war. Then, at age 31, she too immigrated to a new country and tried to make a life.

As you’ve no doubt realized, my parents were typical of the European war generation, as well as being typical for a majority of the Jews who lived in Israel during the time of the War of Liberation. Theirs was a life of high stress, high fear, deprivation, and a general failure to achieve life goals. What was sad was that, even though my parents ultimately enjoyed a somewhat stable, albeit financially precarious middle class existence, in a nice little home, with good friends, and reasonably decent children, these things were never enough to offset the strong sense of loss, fear, and anger that had permeated their young lives. They did not know how to be happy.

Of course, they weren’t always unhappy. They laughed at a good movie, had lovely evenings out with friends, liked some TV shows, read good books, and were often proud of, and definitely loved, their children. But happiness was an intermission to lives that both my parents viewed as depressing, difficult, and unpleasant. Add to that a seemingly common European habit of cynicism and existential despair, and you end up with a high-functioning house in which the children never learn gratitude, to count their blessings, or that true emotional resilience means more than just surviving.

I have spent the past 14 years of my life trying to learn a different template. If you’re wondering why I can date my new template with such precision, it’s because of my children. And it’s not because they brought me happiness; it’s because, at least in the beginning, they brought me misery. They made me miserable because they were the worst children in the world.

How did I know they were the worst children in the world? Well, the evidence came out of my own mouth. I had to criticize them constantly because of the way they ignored instructions, the way they broke rules, and the way they fought with each other. I knew in my mind that I loved them — they were, after all, my children — but my heart had doubts, because they were so very difficult.

One day, I was complaining about my horrible kids to a wise man and he stopped me in my tracks by asking, “Do you ever catch them being good?” My instantaneous response: “Huh?” He explained to me that most people have a bit of a problem with giving praise because good behavior is considered normative and that it therefore slips past them, unnoticed. We see when our children hit each other, but we take as ordinary, and unworthy of comment, the fact that they had spent the previous half hour playing peacefully together.

For the first week, it was I bit of struggle. “Oh, Little Bookworm, I’m so proud of you. I know you wanted to, but you didn’t hit your brother.” (Normally, I would simply have commented on the yelling that took place.) “Look at you, Little Bookworm. You’ve eaten much more neatly than you did yesterday.” (Previously, I would have pointed out the mess on the floor.) After a couple of weeks, pointing out the positive things they did was getting easier. Even better, though, I had discovered something wonderful: I actually had — and continue to have — great children.

Now, many years later, my heart and my head are in synch — I love my kids, because they are lovable. Sure, they can be naughty, but isn’t that true for everybody? And yes, when I’m in a bad mood, the criticisms definitely amp up, and I have to remind myself, still, to catch them being good. But after so many years, catching them being good is mostly automatic, with manifest benefits for us all.

Thanks to my “catch them being good” philosophy, and the manifest benefits that flowed to me because of it, I was very receptive when I first stumbled across Dennis Prager’s “happiness hour” every Friday on talk radio. (That was when I could still hear him on our local radio.) I quickly realized that it wasn’t a silly, fatuous Friday feel-good fest. Instead, it was a philosophical rumination about happiness. Prager believes that, because God gave us the capacity to be happy, we have a moral obligation to cultivate that gift.

In addition to that overarching philosophy, I learned a few specific rules from Prager.  The two chief rules (from my point of view) are as follows:  Happiness is not defined by a life of unending thrills, excitement, money, gifts, or good health. It is, instead, a philosophy that we deliberately embrace so that we are able to approach everything in our life with a positive sense that happiness is always possible. In addition, while we have a moral obligation not to make people in our lives unhappy (unless they are Islamic terrorists, in which case please, make them as unhappy as possible), we are not responsible for making happy a person who rejects a philosophy of happiness. Thus, to the extent my mother refuses to embrace a world view that allows her to find happiness in her life, I do not have to accept her fervent belief that it’s my responsibility to make her happy.

As I said, those are the two main points that infuse much of my thinking in relation to Dennis Prager’s thoughts on happiness. You can learn more about Prager’s approach to happiness Happiness Is a Serious Problem: A Human Nature Repair Manual

The other thing I added to my happiness recipe over the years is gratitude. Every day, at least once, I count my blessings. I live in a marvelous house, in an incredible neighborhood, in a friendly and beautiful community. I have enough money to care for all my basic needs and to leave me enough left over to make possible my living in this wonderful community. I have two great children who love me. They are not necessarily the people I had planned on when I gave birth to them, but they are good on their own terms. I have the most loving dog in the world. My sister is my best friend and my mother is still a part of my life. I also have friends whom I cherish, and these friends are in both my communities — the corporeal world and the cyber one. Even when there are stressors in my life (and believe me, there are), they never diminish the blessings.

All of which leads me to a video I saw today, which tells me that I am on the right path when it comes to abandoning my parents’ lessons about happiness (or, rather, unhappiness) and making my own way on the subject. Shawn Achor goes at warp speed in this video, but listen to every word. He’s incredibly funny and, more than that, the points he makes promise each person and business greater productivity, quality of life and work, and more happiness. (Or as you’ll see, I should have said “more happiness, with the result that they will then enjoy greater productivity and greater quality of life and work”):