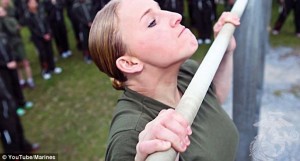 Defense Secretary Ashton Carter is in the news because he announced that women can now serve in all combat positions, including Marine infantry and special forces, including the Navy SEALS. He did that despite mountains of evidence that women lack men’s strength and stamina. This means that the only way to force this social engineering onto our military — which exists to defend us, not to carry out pie-in-the-sky Leftist ideas — is to lower standards. There will be blood.

Incidentally, to toot my own horn, I’m not at all surprised that Carter did this. Here’s what I wrote al,last exactly a year ago when Obama nominated him:

It looks as if the Obama administration has settled on Ashton Carter as its choice for Secretary of Defense, in place of the departing Chuck Hagel. Carter has no military experience, but plenty of Washington experience, including in the Pentagon:

Formerly the No. 2 at the Pentagon and before that its chief weapons buyer, Carter was passed over for the top job when it went to Hagel instead.

Carter stayed on for a year as deputy defense secretary — a position often described as the chief executive of the Pentagon bureaucracy — but his relationship with Hagel was seen as awkward. When he stepped down in December 2013, Carter didn’t give a specific reason for leaving, simply stating in his resignation letter that “it is time for me to go.”

In other words, rather than being new blood, which Obama’s administration badly needs, Carter is just same old, same old. Except he might be worse. If you look at his history, what you realize is that he’s a core member of the academic elite — the type that lives in a world of theory unburdened by reality:

Carter, 60, is little known outside Washington but is renowned for his intellect. A Rhodes scholar, he earned a doctorate in theoretical physics from Oxford University and holds degrees in physics and medieval history from Yale. A longtime faculty member at Harvard, he began lecturing at Stanford this fall.

With a resume like that, I wouldn’t want Carter as Chief Dog Catcher. If it’s done nothing else, the Obama administration has proven that people marinated in academia have really bad ideas.

Those of us paying attention could smell the social engineering from a mile away.