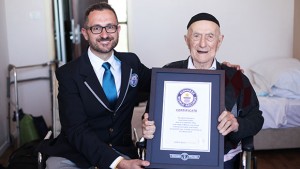 I know I mangled the Latin saying “Media vita in morte sumus” (in the midst of life we are in death), but this story is a wonderful reminder that, in the midst of death, there is life — and very, very long life:

Born in Poland, near the town of Zarnow on 15 September, 1903 to parents Moszek-Dawid and Brucha Krystztal, Mr Kristal has lived through both World Wars and survived Nazi war camp Auschwitz in the 1940s before relocating to Israel.