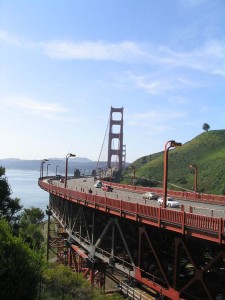 I was driving into the city the other day with a friend, a Progressive friend, and she commented approvingly on the $30 million mobile barrier installed last year on the Golden Gate Bridge.  I blogged about this at the time, noting that according to the local newspaper, since 1971 only 36 people have died in car accidents on the Bridge, with the last death taking place in 2001, fourteen years before the barrier’s installation. Moreover, of those 36 deaths, only 16 were from head-on collisions, which are the type of collisions that the barrier is meant to lessen or eradicate.

Thirty-six deaths in 45 years if 36 individual tragedies, 36 people who never returned to their loved ones, 36 lives cut short. I don’t mean to minimize those deaths. But think about this:  Approximately 40 million cars per year drive across the Golden Gate Bridge. That means that, over that span of 45 years, 1,799,999,964 cars rolled across the bridge without any fatalities at all. Put another way, only 0.000002% of people driving on the bridge failed to make it off safely. And when it comes to head-on collisions, finding the percentage of deaths out of that 1,800,000,000 flummoxed my calculator so badly it just spewed out an endless string of 8s.

When you see the actual numbers, the Golden Gate Bridge is an incredibly safe stretch of road. I’m betting that, if you searched the length and breadth of California, you’d easily find more dangerous stretches of road — or more dangerous beaches, state parks, government parking lots, or a whole bunch of other things under the state’s aegis. But the Golden Gate Bridge with a death rate of .000002% over 45 years merits $30 million dollars in “safety” spending.

I wasn’t so blunt with my friend.  I merely wondered if the money could have been better spent elsewhere.  “Oh, no,” said my friend, an abortion true believer.  “Any life saved is worth it.”

Rather than calling out the hypocrisy of that statement, I pressed on. “But what if you could save more lives elsewhere?  I mean, even in California, money isn’t infinite.”

Faced with this question, my friend delivered her coup de gras, the conversation stopper against which there was no logical argument:  “But I  think it was really dangerous before. It just makes sense to have this barrier.”

After all, why mess around with facts when you’ve got feelings, nothing more than feelings?