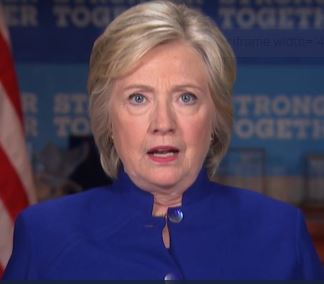 According to Matt Drudge, Hillary has reason to be nervous right about now:

Oh, on the sex stuff. Hillary is about to get hers… pic.twitter.com/Ilk2MSNYTe

I wonder if this has anything to do with the alleged tape of Bill Clinton with a 13-year-old. . . . I also wonder if the same people who are appalled about Trump’s prepubescent boasts will get up in arms if they learn that Hillary’s husband is a pedophile, which is something she has to have known.

Given that the picture Drudge chose shows Hillary with Ellen Degeneres, maybe the tape has nothing at all to do with Bill and everything to do with Hillary’s own sexual preferences. Sadly, were proof finally to emerge that she’s playing for the other team and has been living a lie for decades, I know her supporters wouldn’t care.

The Hillary crowd had been pretty darn comfortable with the rape accusations against Bill, lionized Ted Kennedy despite his manslaughter problem, and forgave Bob Byrd his beagle status in the KKK. I think the party will give Hillary a pass. The undecideds, however, might be less generous.